Maryland wrestling falls to No. 3 Michigan in season opener, 38-3 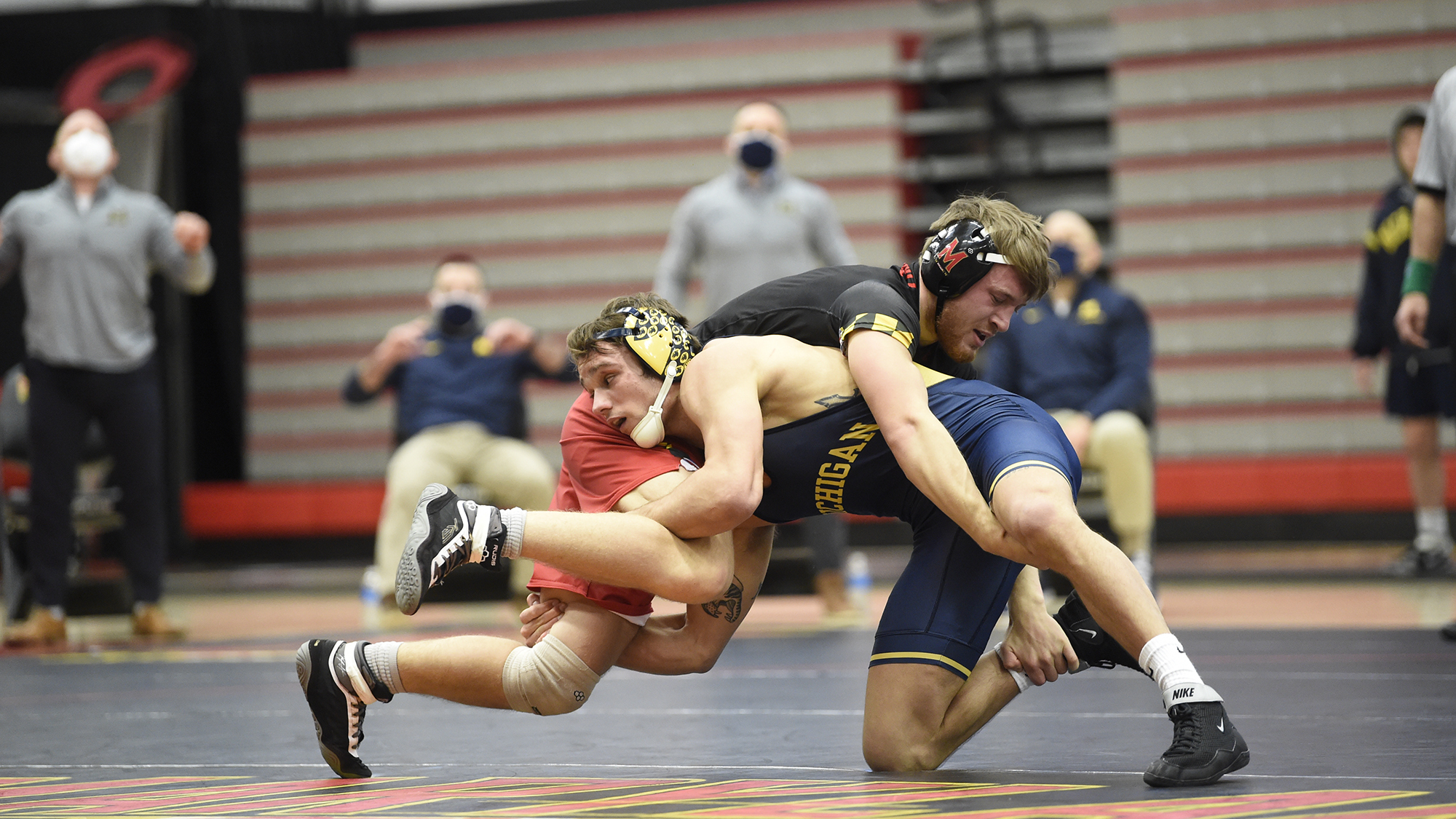 With no crowd in attendance at the XFINITY Center Pavilion, screaming and shouting from the coaches and teammates looking on echoed around a quiet arena.

And as Maryland 184 pounder Kyle Cochran faced up against Michigan’s Joseph Walker, those shouts intensified. The two were locked in a tight match, a back and forth contest with neither able to get a clear upper hand. That changed in the third period, as Cochran pulled off an escape to snatch a win via decision.

Other than that it was all Michigan. The Terps were looking to start their season with an upset win in Big Ten play over the No. 3 Wolverines. But the Terps quickly fell into an early 7-0 hole. They wouldn’t be able to recover, dropping their first meet of the season to the Wolverines, 38-3 .

[“We need time”: After disappointing campaign, Maryland wrestling is looking ahead]

After nearly a year away from the mat, Clemsen’s squad struggled against Michigan’s nationally-ranked talent. And although Maryland made strides at points last season, Big Ten competition has proved a significant challenge for the Terps — they haven’t won a conference meet in five years.

That didn’t change Sunday, with the Wolverines flashing the strength and quickness that has pushed them to the upper echelon of college wrestling..

Sandoval was down to Dylan Ragusin 2-1 heading into the third period but couldn’t stay in the contest, falling 9-1 by major decision. Meanwhile, Cockrell held his ground against No. 14 Jack Medley, but Medley pulled away in the second period, scoring a decision 12-5 to keep the Terps at bay.

141-pounder Danny Bertoni scored a quick takedown to grab a 2-1 lead after the first period but succumbed to Drew Mattin in the second period by pinfall.

149-pounder Michael North suffered a similar fate, dropping four of five points in the first period before eventually losing by decision to No. 6 Kanen Storr, 8-4.

“We gotta get better at taking the fight to people a little bit. We gotta get to our positions a little more, we can’t let the wrestling [just] happen” Clemsen said. “You can’t let it come at us. We gotta go get what we gotta get.”

Michigan’s deep roster flexed its muscle again when 157-pounder Will Lewman dominated Lucas Cordio, winning by technical fall 22-6. Cordio, one of the Terps’ best performers from last season, was unable to build upon his last appearance on the mat — a victory over Rider’s Travis Layton on Feb. 22, 2020, fueled by a late pin.

165-pounder Jonathan Spadafora fell behind 6-2 in the first period before eventually losing by major decision to No. 17 Cameron Amine 13-5.

His brother, Philip, had similar toils at 174 pounds, losing a 18-10 major decision to No. 2 Logan Massa. 197-pounder Jaron Smith’s match was a little closer, battling tight with Andrew Davison. But the result stayed the same, with Smith unable to overcome Davison, losing 11-8.

Cochran’s victory was the bright spot, though. The Paramus, New Jersey, native went into Sunday’s match focusing on the basics — throwing his weight around and looking for takedowns. Although he strayed from his strategy slightly in the second and third periods, Cochran’s approach was enough to secure the all important decision over Walker.

“I just went into the match like I always do,” Cochran said. “Put pressure on, get to the legs or get to my ties, get takedowns and just keep scoring.”

In the final match of the duel, 285-pounder Bryan Bowes suffered a pinfall at the hands of Mason Parris, capping off a torrid afternoon in which the Wolverines’ quality reigned supreme.

The Terps will look to regroup next Saturday when they travel to East Lansing, Michigan to take on Michigan State and Minnesota.