A day after Capitol riot, Maryland and Iowa men’s basketball knelt in protest 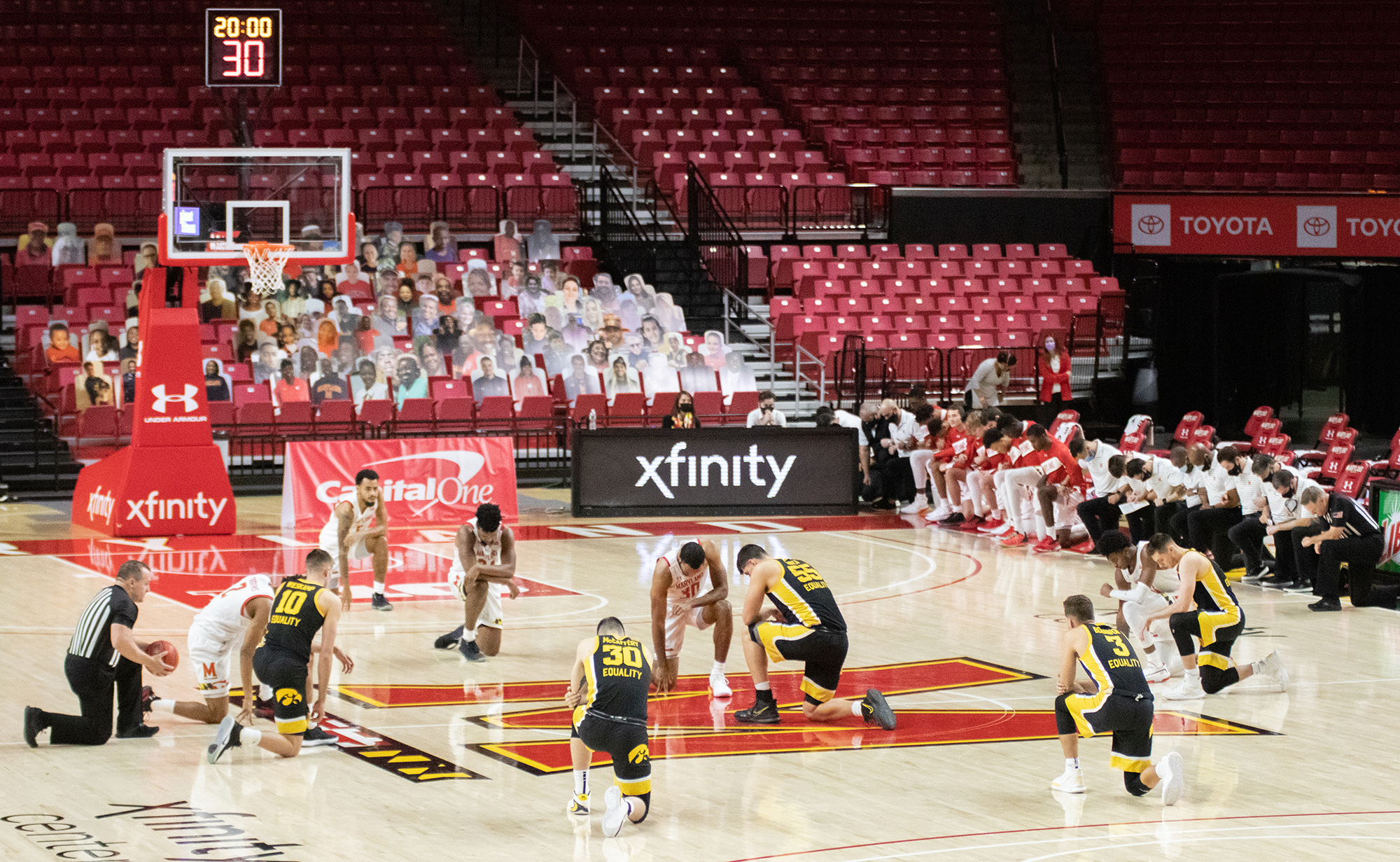 An eerie silence fell over Xfinity Center prior to Maryland men’s basketball’s tipoff with No. 5 Iowa Thursday night. Starters from both sides took to the floor quietly, settling into their positions around center court.

Then, they knelt. On the sidelines, most joined them, keeping their heads down. Maryland bench players and staff interlocked arms with one another.

It’s an image that became all the more common over the summer, yet another response to the systemic racism and state violence that has come to define much of the Black experience — both in this country and abroad.

These issues haven’t gone away. And after a mob of rioters spurred by President Donald Trump stormed the Capitol Wednesday, the Terps and Hawkeyes took a stand — by taking a knee. For Maryland, it’s the latest action in a push toward anti-racism, a pursuit that started over the summer as protests swept the nation.

“We talked about it, communicated with some of their guys before the game and we felt like right before tip we could just all unite and send a message together,” guard Aaron Wiggins said. “Put a knee on the ground and just show what we stand for.”

Thursday’s protest was a player-led decision, coach Mark Turgeon said. Guard Darryl Morsell contacted some of Iowa’s players prior to the game. After fleshing out a few details, they came to a consensus: kneeling before the tipoff.

These conversations — about police brutality, systemic oppression and Blackness — have been ever-present for the Terps, even when players and staff couldn’t meet face-to-face. Amid last summer’s protests, Turgeon proctored Zoom sessions, giving players an outlet to speak candidly about their experiences with discrimination.

It was a welcoming environment, Morsell said. And with in-person interactions limited, Turgeon’s Zoom calls offered players an opportunity to connect with one another on a deeper level.

“I think that helped us gain a better understanding of everybody on the team and just gain a different level of respect,” Morsell said earlier in the season. “Before I even met some of these guys, I kinda knew what individuals they were, what kind of character they had. I think that goes a long way.”

That team chemistry has flourished in the months since, even as Turgeon’s squad has wobbled during Big Ten play. There was a holiday road trip, filling the Terps with belief and confidence prior to their upset victory over Wisconsin. There are the bench reactions, too; vociferous and intense after big plays.

But much of the team’s togetherness stems from those conversations it had over the summer. And on Wednesday, those feelings — of frustration, anger and hurt — resurfaced.

“Guys felt like it just showed the inequality and the blatant racism and unjust ways of our country,” Wiggins said. “A lot of people felt like if some of those people were Black who tried to storm into the Capitol, who walked up and protested the way it did, they’d be killed.”

The contrast between the police response to Wednesday’s events and this summer’s Black Lives Matter protests was stark. Over the summer, protesters fighting against institutional inequality and inequity were often met with rubber bullets and tear gas.

“The reasoning behind what went down this summer with Black Lives Matter — with the marches, the protests — was because of the unjust killings, the racism, the social injustice,” Wiggins said. “Yesterday, we see the way it was handled and the reason behind it, political and stuff. It affected a lot of us.”

In the swirl of emotion that followed, the Terps and Hawkeyes let their commitment to equity, equality and racial justice shine through. Although the action itself was brief, the decision to kneel prior to the game was months in the making, motivated by a summer largely defined by anti-racism. It’s a moment those players and coaches won’t soon forget.

“The team came together and wanted to do something special,” guard Eric Ayala said. “It was one of the most memorable things I’ve been a part of in my basketball career.”