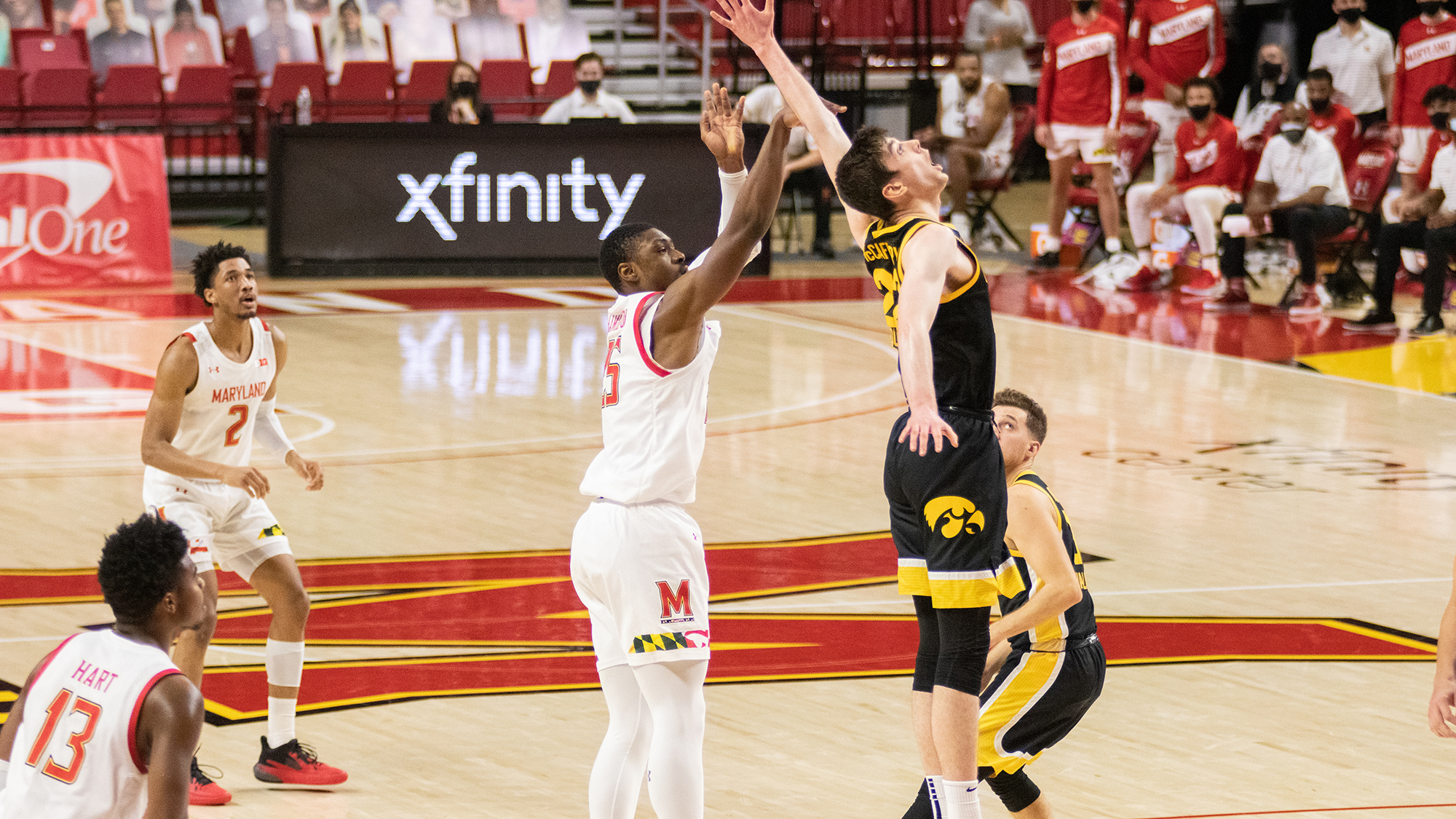 Iowa guard Joe Toussaint notched a steal and drove the length floor for a layup a little over six minutes into the first half, the first of 33 bench points for the Hawkeyes in their 89-67 win over Maryland men’s basketball Thursday night. Toussaint’s bucket preceded the only Maryland points for an almost-10 minute stretch of the first half.

During that stretch, Iowa rattled off 20 unanswered points to take a 29-19 lead, burying the Terps for the remainder of the game. And it wasn’t just presumptive Player of the Year candidate Luka Garza doing the damage: Iowa’s bench accounted for 13 points throughout the run.

“We just had a stretch there where we weren’t worth a flip on offense and weren’t very good on defense,” coach Mark Turgeon said. “The last eight minutes of that half, we just let the game get away from us, and it’s disappointing.”

Maryland did not receive similar contributions from its bench, scoring just 16 points off the bench. Iowa’s depth, on top of Garza’s 24-point effort, proved to be too much for the Terps to handle as it fell to 1-5 in Big Ten play.

“They’re excellent,” Turgeon said. “They made shots, and they’re hard to guard because Garza’s so good. It was tough.”

The Iowa bench continued its first half prowess all the way until the buzzer sounded. With no time remaining on the clock, forward Keegan Murray snuck a left-handed layup around Donta Scott and Eric Ayala for his fourth bucket of the half.

Murray led the bench with 12 points at the end of the night. Meanwhile, 10 of Fran McCaffery’s players entered the scoring column Thursday night.

In two meetings with Maryland during the 2019-20 season, Iowa didn’t rely on its bench nearly as much as it did Thursday.

The Hawkeyes totaled 17 bench points in the season series which they split with the Terps, and just six of those points came in Iowa’s convincing 18-point victory over No.12 Maryland on Jan. 10.

[Maryland men’s basketball is fueled by its energetic bench]

Garza finished with 21 points in both matchups from a season ago, but the Terps bench outscored Iowa’s on each occasion. The Hawkeye bench showed up alongside Garza in their only regular season game with Maryland this season, wreaking havoc on the No. 12 ranked team in the Big Ten.

“When shots don’t fall, we still have to make sure we’re guarding them the same way we did to start the game,” guard Aaron Wiggins said. ”We let our offense and our missed shots affect every other aspect of the game. That’s not playing tough.”

Thursday wasn’t the first time on the campaign that the Terps’ lack of depth was exposed by a conference opponent. Maryland’s bench has been outscored in four out of its first six Big Ten games.

The bench “mob” was central to the Terps’ 70-64 upset over then-No. 5 Wisconsin on Dec. 28, outsourcing the Badgers 16-12. Jairus Hamilton drove the bench effort, notching nine points and four rebounds.

The bench performance has been a consistent issue as of late. In the Terps’ loss at Indiana Monday, bench players saw 43 combined minutes of playing time, but they added just four points to the final score. Even without production from across the board, Turgeon is standing by his team.

“We’ve been in every game. We’ve had leads in the second half,” Turgeon said. “My guys are playing their butts off for me, especially down a man the other night. I couldn’t be more proud of the effort my guys have given me.”