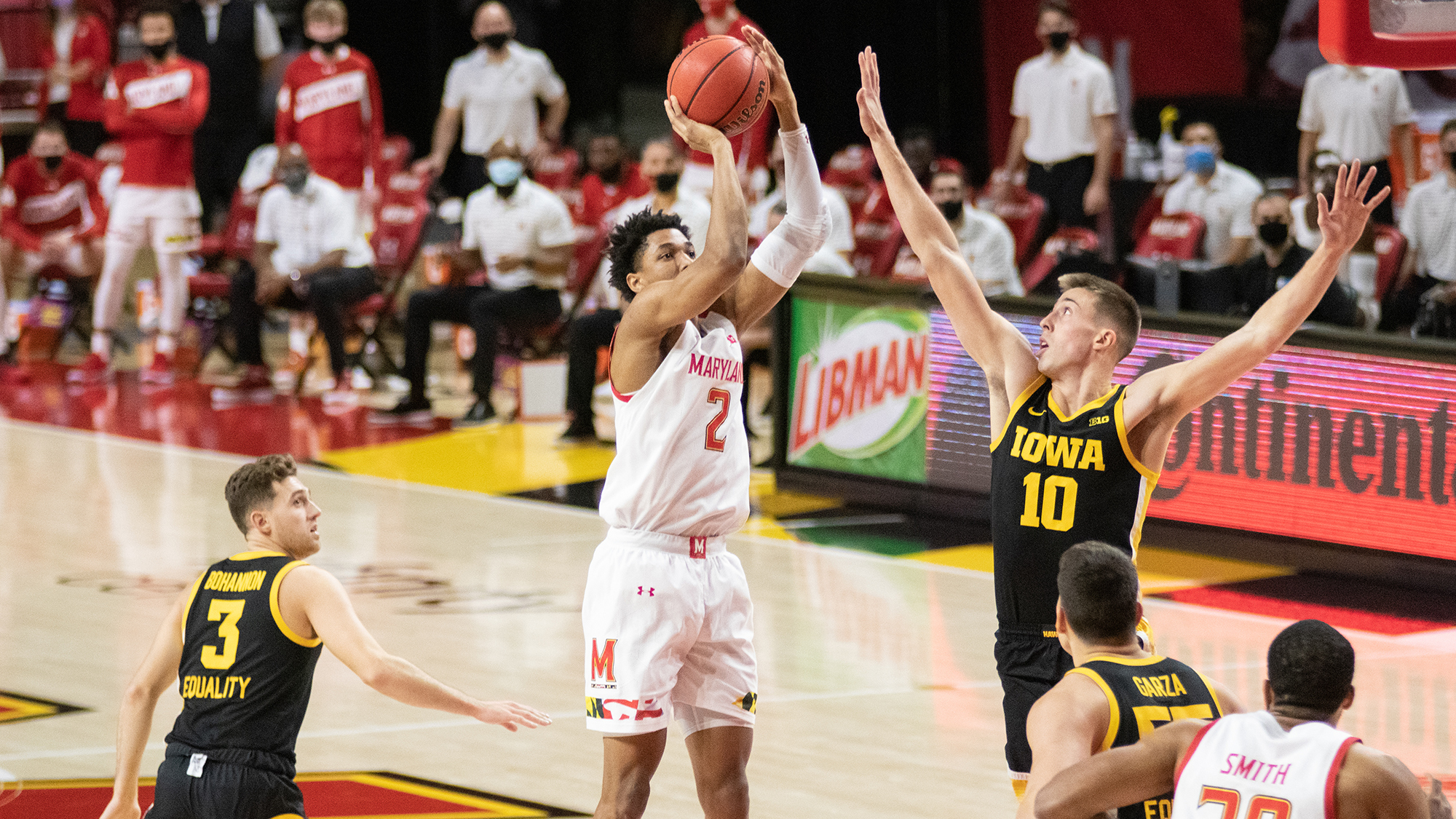 Aaron Wiggins pulls up for a shot as Joe Wieskamp goes for the block during Maryland's 89-67 loss to No. 5 Iowa on Jan. 7, 2021, at the Xfinity Center. (Julia Nikhinson/The Diamondback)

As time dwindled toward zero at the end of the first half, Iowa forward Keegan Murray looked at the shot clock. With Maryland men’s basketball’s defense toiling, Murray sprinted the length of the court before launching a runner off the glass.

It fell through. The Terps drudged off the court, looking weary after seeing a 10-point first-half lead descend into an 18-point deficit. Meanwhile, the No. 5 Hawkeyes were filled with confidence, yelling and chanting as they drifted to the locker room.

For all of Maryland’s exploits in the opening eight minutes, Iowa held. And, fueled by a 24-point Luka Garza display, the Terps couldn’t answer, falling 89-67 for their third straight loss.

“We tried to throw a couple defensive schemes at them but they’re a great team, they move the ball well, they were able to score,” guard Aaron Wiggins said. “We just weren’t tough enough, we weren’t mentally locked in enough to fight.”

[Maryland men’s basketball is fueled by its energetic bench]

Prior to the opening tip-off, the Terps and the Hawkeyes kneeled, a player-led decision that stemmed from conversations between Darryl Morsell and a few of Iowa’s players, coach Mark Turgeon said.

When the game started, it was Maryland on top. Guard Hakim Hart set the Terps off with a three-pointer 20 seconds in. Guard Eric Ayala doubled that feat just over a minute later, splashing from beyond the arc to put Turgeon’s squad up six.

Fueled by a pair of Ayala and Wiggins buckets, Maryland soon opened up a 19-9 lead. Garza was largely held quiet in the opening eight minutes, with the Terps sending waves of double-teams to harass the Hawkeyes’ All-American center.

“I thought we made huge strides in the first eight minutes of the game,” Turgeon said. “It’s the best we’ve moved the ball. … We looked good.”

Yet it was Garza’s departure at the 11:47 mark of the first that spurred Iowa’s resurgence. Jack Nunge slotted from three to cut Maryland’s lead to four. Murray followed that up with a two-handed jam. Nunge added another bucket, this time on a putback to knot the game up at 19. And Patrick McCaffery would score a layup of his own, the beneficiary of a Joe Toussaint steal. In a matter of moments, the Hawkeyes were up two.

And that lead would swell. Shot after shot clanked for the Terps, who went nearly nine minutes without a point. Iowa, on the other hand, was ruthless, showing all the makings of the team that came into Thursday’s game with the fourth-best scoring offense in the country. Garza checked back into the game at the 7:54 mark. And the reigning Big Ten Player of the Year took over, bumping and spinning off Maryland’s undersized defenders.

Garza scored 17 in the first half, platforming Iowa’s rise. Maryland, in contrast, stayed flat, racking up nearly as many turnovers — eight — as points — nine — in the final 12:51 of the first. All that amounted to an 18-point deficit at halftime, a full-court sprint and layup by Murray adding to the Terps’ misery right before the buzzer.

“I thought we had a really good strategy that was working pretty well,” Turgeon said. “Then we missed every shot against the zone and decided we weren’t gonna run back hard enough.”

The second half went much like the first for the Hawkeyes, whose offense continued to churn with little resistance. They would shoot 56.3 percent in the second half and 53.7 percent for the game, keeping Turgeon’s squad at arm’s length.

Although Maryland improved offensively — Wiggins notched 11 points in the second, a second-straight impressive scoring display — it wasn’t enough. Donta Scott, a beacon of consistency for the Terps throughout the season, was relatively quiet, scoring 13 points on 5-of-15 shooting. Morsell returned to action after missing Maryland’s trip to Indiana with a facial fracture. Sporting a mask, the senior guard struggled, finishing with six turnovers.

“Hopefully he’ll get better by Sunday getting used to the mask,” Turgeon said. “He wasn’t himself.”

With the likes of Morsell and Scott out of rhythm, Turgeon turned to an unfamiliar face: freshman guard Marcus Dockery. The Washington, D.C., native has rarely appeared in his maiden season, playing just 18 minutes so far this campaign. But Dockery impressed Thursday, scoring eight points — six of which came from beyond the arc.

His burst was one of few bright spots for an outmatched Maryland squad Thursday night. Garza spun and swiveled, leading an Iowa offense that looked every bit as dominant as advertised, leaving the Terps listless and outmatched. Maryland was equally ineffective at the other end, clanking contested threes and missing ill-advised shots. And as the final buzzer sounded, the Terps were left to contend with the deflating reality of a third straight loss.

“As a team we have to do better, just coming together, playing behind one another and just rallying each other up in times like that where teams go on runs,” Ayala said. “In the past, we haven’t. I think moving forward, it’s something we need to work on.”