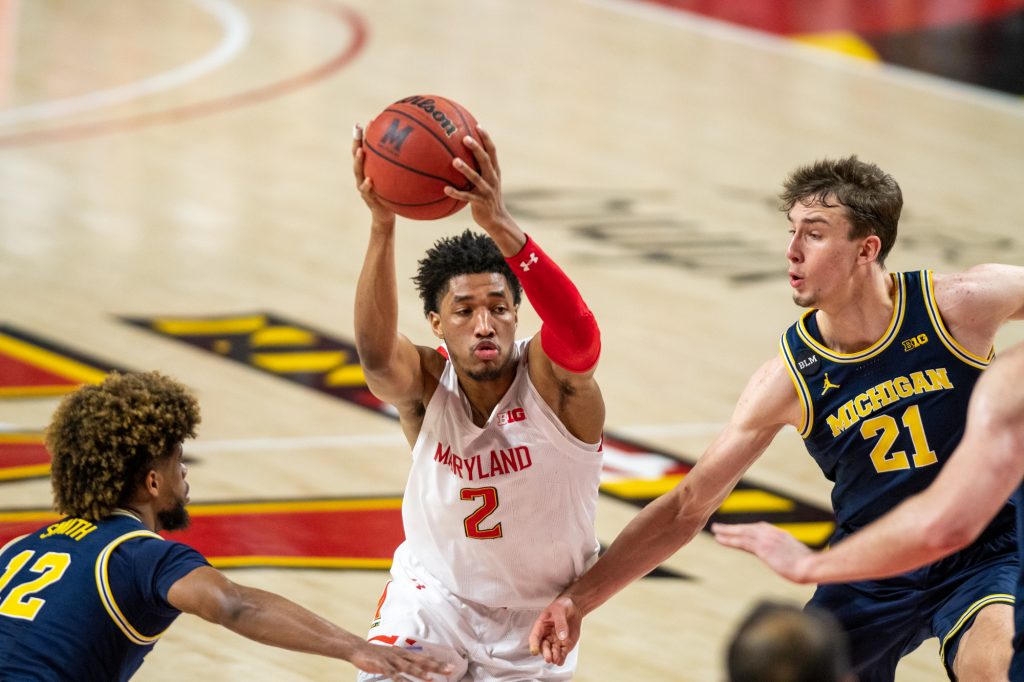 Trayce Jackson-Davis wasn’t used to all this space, certainly not in the first half. Indiana’s talisman poked the ball out of Maryland big man Galin Smith’s grasp with 9:41 left in the second half, acres of open floor in front of him.

And with Smith and the rest of the Maryland men’s basketball team trailing in the distance, the sophomore forward soared, skying toward the rafters before slamming the ball through the hoop. The Hoosiers, after wobbling for most of the night, were up four. And Jackson-Davis let everyone know, yelling as he drifted to his bench.

Jackson-Davis was Indiana’s standout performer, dropping 22 points — most of which came in the second half. And although the Terps’ defense impressed for large portions of the game, it wasn’t enough to overcome Jackson-Davis’ exploits, as they fell 63-55 Monday night.

[With Darryl Morsell out, Maryland basketball looks to pick up the slack against Indiana]

In light of Darryl Morsell’s absence — the senior guard suffered a facial fracture against Michigan and is expected to miss 1-to-2 weeks — much of the Terps’ (6-5) focus revolved around defense. Morsell is Maryland’s best perimeter defender, his leadership and communication serving as a sort of heartbeat for Turgeon’s side, even when the buckets aren’t falling.

Without him, the Terps had to adjust. And in Jackson-Davis, they had a worthy adversary. The sophomore forward entered Monday’s contest averaging 20.1 points per game on 53.5 percent shooting.

Maryland’s commitment to defense was on full display early as Smith and Jairus Hamilton took on the challenge of handling the Hoosiers’ (7-4) workhorse. Their efforts worked as Jackson-Davis toiled throughout the opening period, scoring five points on 2-of-9 shooting.

Indiana went as Jackson-Davis did, struggling to string together baskets as the Terps’ defense hounded players on the perimeter and interior alike. The Hoosiers’ shot just 30 percent from the field in the first half and 0-of-9 from three.

“Our guys were locked in defensively in the first half,” guard Aaron Wiggins said. “We emphasized guarding ball screens, keeping the bigs off the boards. Our post defense was working for us. We contained their four and their five in the first half.”

Maryland’s offense didn’t fare much better, hitting just 38.5 percent of its looks in the first half. Still, the Terps entered halftime with a six-point edge, the beneficiary of Wiggins’ 10-point, six-rebound performance in the opening period.

Despite Maryland’s defensive solidity, there were concerns. Donta Scott drifted out of the game early, taking just two shots in the first 20 minutes. And for all of Indiana’s offensive struggles, it was still just a short scoring spurt away from taking the lead.

The Hoosiers looked emboldened in the second half, taking advantage of a stretched Terps’ squad to chip away at Maryland’s lead — and eventually, surpass it. Jackson-Davis emerged, fighting through tight coverage to overcome his dreary start.

The Greenwood, Indiana, native took up a permanent residency in the post, using his size and finesse to terrorize the likes of Smith and Scott. Jackson-Davis dropped 17 points in the second, none more emphatic than that left-handed slam to put the Hoosiers up four with just under 10 minutes remaining.

Indiana continued to exert its influence in the paint throughout the period. Smith fouled out with 5:07 left, opening the floodgates for Jackson-Davis and Race Thompson to dominate the offensive glass. The pair combined for eight offensive rebounds. The Hoosiers would rack up 43 total boards, 12 more than the Terps. And that disparity reigned supreme as Indiana’s lead swelled.

All the while, Maryland’s offense flailed. Shortly after Jackson-Davis’ dunk, Turgeon’s squad endured a nearly 6:30 scoring drought, crumbling down the stretch in a game they once seemed to control.

“Our offense let us down tonight,” Turgeon said. “We didn’t move the ball as quickly as we needed to, we missed a lot of open shots on the inside-out. We’re just not passing the ball quick enough. We’re holding it one second too long and we’re missing some opportunities.”

Despite a 22-point night from Wiggins, Maryland struggled to find any rhythm on offense — and couldn’t contain one of the conference’s most dynamic scorers. And as the buzzer sounded, the Terps were left to confront consecutive losses in which an opposing big man dominated play.