With Darryl Morsell out, Maryland basketball looks to pick up the slack against Indiana 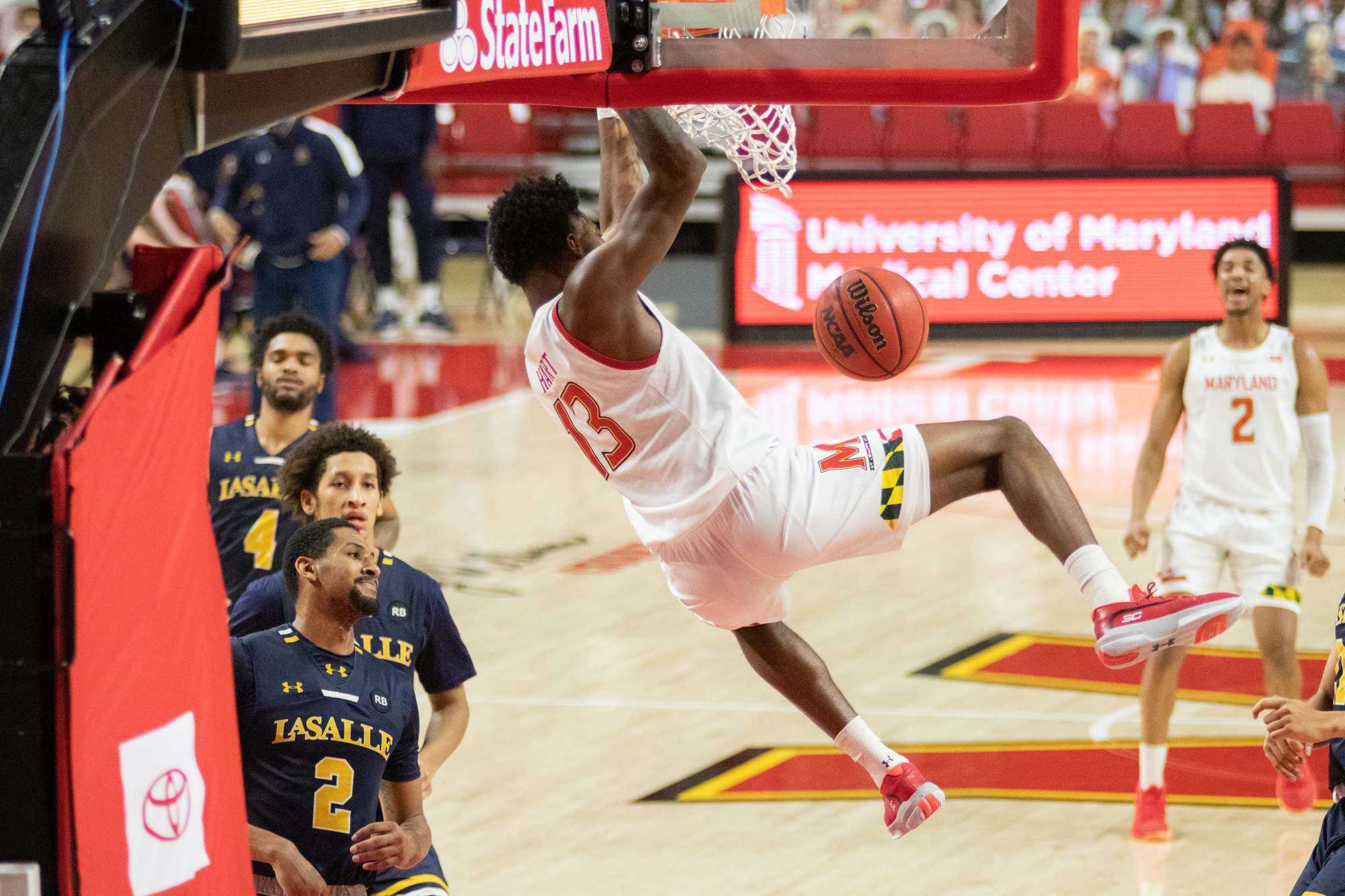 Through transfers, graduations, injuries and NBA draft declarations, Darryl Morsell has been a constant for Maryland men’s basketball.

The senior guard has missed just one game for the Terps over his career: A 94-71 win over Loyola on Dec. 11, 2018. Since then, Morsell has reeled off 64 straight appearances. He’s started the vast majority of those games, his defensive effort and versatility serving as a foundational piece for Maryland teams of the past — and present.

But when the Terps travel to Bloomington to take on Indiana Monday evening, they’ll be without their senior leader. Morsell is expected to miss one to two weeks after suffering a facial fracture in Maryland’s loss to No. 16 Michigan on New Year’s Eve.

And although the Terps have a host of players ready to step up in Morsell’s absence, it’s a sizable loss, particularly for a team still trying to find its defensive footing in Big Ten play.

“Darryl’s a tough kid, he just brings so much energy to our team offensively and defensively,” forward Jairus Hamilton said. “He just has a huge presence on the court.”

In 10 games this season, Morsell is averaging 7.7 points, 4.8 rebounds and 2.7 assists on 41.9 percent shooting. A shoulder injury limited his offensive effectiveness in the back end of nonconference play. However, he has seen an uptick in his efficiency recently, hitting 60 percent of his shots in his past three games.

Defense is Morsell’s calling card, though. The senior guard flies around the perimeter, using his strength, size and motor to pester opposition guards and wings. He’s a constant nuisance, bringing physicality and competitiveness that is vital to Maryland’s success.

In his absence, that responsibility has been doled out across the squad.

“It’s been definitely a team contribution, trying to pick up the energy and all that toughness that he brings in daily,” Hamilton said. “We’re just trying to figure it out, how we’re going to move on with him being out for however long he’s going to be out for.”

For coach Mark Turgeon, that means enlisting veterans to take on Morsell’s contributions.

“It’s different without him, obviously,” Turgeon said. “You’re asking more out of more people: Eric [Ayala] and [Aaron Wiggins] and Donta [Scott] and Galin [Smith] and Reese Mona. Guys that have been around, guys that understand what it takes to win.”

Hakim Hart will also be called upon to fill Morsell’s role. The Philadephia native will take Morsell’s position in the starting five, Turgeon said. He impressed the first time he was named a starter, exploding for 32 points and four steals against Saint Peter’s on Dec. 4.

[Maryland men’s basketball can’t keep up with No. 16 Michigan in second half of 84-73 loss]

And although Hart has taken massive strides as a scorer and creator this year, his defensive improvements have been subtle, but noticeable. A good read here, a solid shot contest there, the sophomore guard’s defensive effort has been a welcome presence to Turgeon’s squad.

Morsell’s absence, it seems, offers Hart another platform to show off his completeness. It’s a side of his game that Morsell, in particular, has tried to coax out of him in the past few days — even as he rests on the sideline with an ice pack pressed to his swollen face.

“He’s been a coach on the sideline, he’s been helping the younger guys like me,” Hart said. “Just about playing hard each possession, every possession. That’s how we’re going to win games. If we go in with his mindset, we’ll be fine.”

It’s a difficult mindset to recreate, admittedly. Much of Morsell’s significance comes away from the stat sheet. He’s one of the Terps’ most vocal figures, a player who bellies teammates with confidence and belief, even when his own shot isn’t falling.

But, armed with a committee approach to replacing Morsell’s exploits on and off the court and an emphasis on defensive intensity, Turgeon’s squad hopes to escape Bloomington with a second consecutive road victory.

“We had two good days of practice, we’re trying to figure how to be a better defensive team, worked really hard defensively,” Turgeon said. “Hopefully it helps us against a good Indiana team.”