Maryland men’s basketball is fueled by its energetic bench 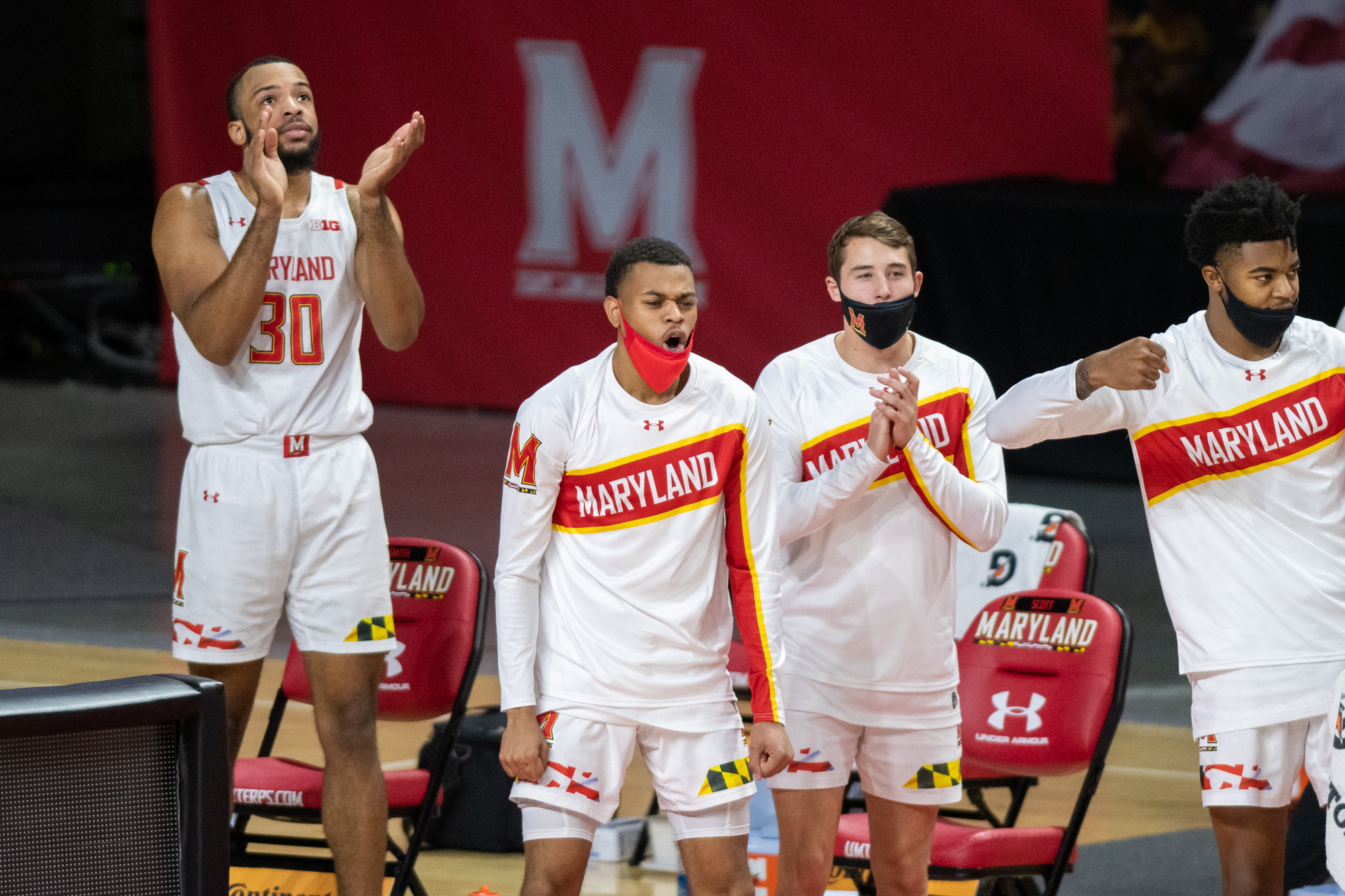 On Dec. 28, Donta Scott soared to the rim with less than a minute to play, evading three Wisconsin Badgers and slamming the ball. His leap was the defining moment in Maryland men’s basketball’s unlikely upset and first win against a top-10 opponent since 2016 — but he wasn’t the only one to jump on the play.

As Scott flew, so did some of his fellow Terps, leaping in jubilation as their teammate iced a big road win.

“It was a big, big boost of energy for us,” guard Aquan Smart said.

That extra energy came not from the four other Maryland players on the floor, but from an animated bench — one that was loud and encouraging all game, making its presence felt in the near-empty Kohl Center.

The rowdy Maryland bench corps has been a constant from the sidelines in this pandemic-altered, fanless season, offering encouragement in lieu of a packed arena. In the midst of a cold stretch, in which the Terps have lost back-to-back contests, the sideline support could be vital.

The bench has a number of set rituals. Every three-pointer is met with a loud “BOOM.” An and-one means everyone flexes. And when the Terps’ defense gets three stops in a row, the bench yells, “three.”

And dunks, such as Scott’s against Wisconsin, require an even more energetic response.

Basketball performance director Kyle Tarp dubbed the group “The Mob,” and the bench embraced it.

“We just kinda went with it,” Dockery said. “It gave us our own little thing, because we’re always together all the time.”

[Fueled by road trip, Maryland men’s basketball is closer than ever]

Animated reactions to big moments have become the norm for the Terps. Smart and guard Reese Mona leapt into each other after a Scott layup to tie the game against Wisconsin. Center Chol Marial twirled his towel in the air following a contested three from forward Jairus Hamilton against Purdue. Mona pretended to fall over in disbelief when Scott slammed over La Salle’s Jack Clark.

But the bench has provided a lift on more than just individual plays. When those on the floor jog over for a timeout, there’s a burst of high-fives from the bench.There are more cheers when they return to the court. There are shouts of encouragement throughout.

That constant vibrancy has proved to be particularly valuable in empty stadiums. With no screaming fans, extra noise has become more important than ever.

It’s something Turgeon and his staff emphasized at the start of the season.

“I told guys if they’re not gonna give more energy, I’m gonna leave them home. I’ll get people on the street, start COVID testing them every day,” Turgeon said. “Our guys have brought energy ever since we said that.”

The Terps played on the road on Christmas Day, spending it away from their families. They also spent late into New Year’s Eve at Xfinity Center.

In any other year, Dockery and the Terps could look over to the home seats and see loads of family and friends cheering them on. But this season, they’ve had to find camaraderie and support in each other.

“To be on the road, away from our families, not having anyone at the games — all we have is each other,” Dockery said.

Smart notices it when he’s on the court, as well. He can hear the cries of “boom” and the shouts after a big play.

“Our energy is amazing,” Smart said. “It’s out of this world.”

With a relentless Big Ten slate, that extra boost is vital.

That certainly was the case when Scott drove to the rim against Wisconsin. As he got a step on his man, the bench rose to its feet, anticipating the big play that was to come.

And by the time he threw it down to clinch Maryland’s big upset, there was one thing of which he could be certain, a constant in a season full of inconsistencies: an explosion of energy from the bench.