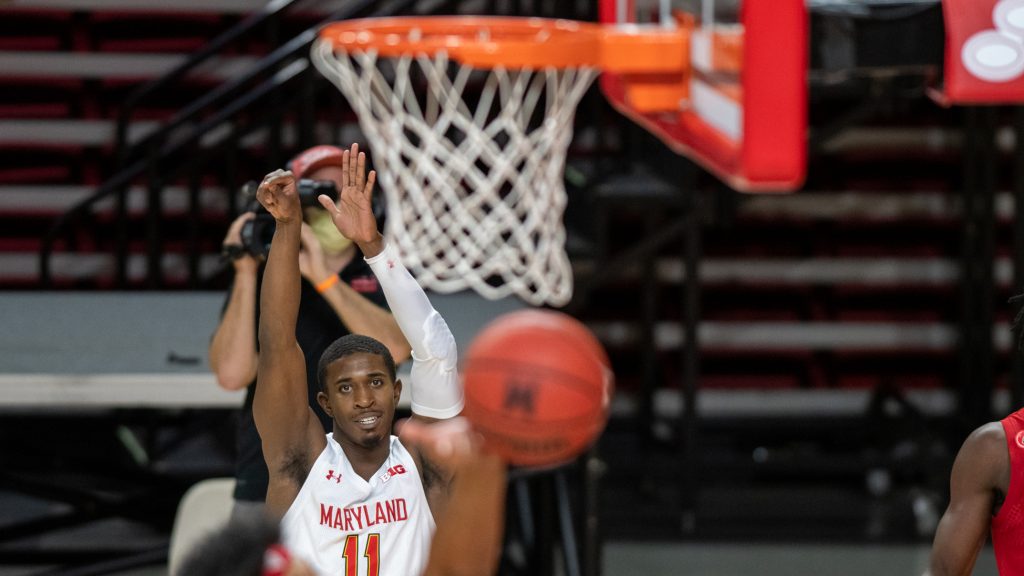 Darryl Morsell watches his shot attempt during Maryland’s 74-60 loss to No. 19 Rutgers on Dec. 14, 2020, at the Xfinity Center. (Joe Ryan/The Diamondback)

With six minutes remaining against Rutgers, Darryl Morsell had a chance to bring Maryland men’s basketball back within ten points. The senior took a wide-open three off a pass from Eric Ayala, but he left it short.

It was Morsell’s eighth consecutive missed three, and fourth of the game. Notching just ten total points over the Terps’ last three games, Morsell’s offensive struggles are glaring — especially with only one game left on the non-conference schedule. But his team isn’t losing trust.

“I feel bad for him. He has really gotten better,” coach Mark Turgeon said. “He just needs to relax, see a couple go down, and I think you’ll see a different Darryl. I think there’s a few guys like that right now.”

Considered a high-level defender throughout his Maryland career, Morsell was expected to be a key contributor on offense for the Terps (4-2) following the departure of Anthony Cowan and Jalen Smith, the team’s two leading scorers last year.

He averaged 8.5 points per game a year ago and made shots in critical situations, including a game-winner at Minnesota on Feb. 26.

Now shooting less than 40 percent from the field, Morsell hasn’t looked especially comfortable in his new offensive role this season.

“Hopefully he’ll relax and play with a little more confidence,” Turgeon said. “It’s not from a lack of effort. He’s really trying.”

After the Rutgers game, Turgeon revealed that Morsell has been dealing with a shoulder injury. Turgeon said he separated the shoulder a while back, but it never forced him to miss any playing time. Morsell said the injury has not affected his intensity or offensive production.

“I’m playing basketball. At the end of the day, if I’m on the court, I got a job to fulfill,” Morsell said. “I don’t care. I still gotta win games.”

But Morsell took full responsibility for his offensive woes during the Rutgers matchup and Maryland’s 67-51 loss at Clemson on Dec. 9, in which Morsell was 2-of-10 on field goals. He said he and his teammates are working on getting more open looks.

“I could get better shots, for sure,” Morsell said. “I definitely sat down and talked to Coach Turgeon about it. I told some of the guys on the team that I will be better and look to take better shots for the team. I’m just focused on getting better everyday.”

Maryland will play its final nonconference game Tuesday against La Salle, putting pressure on Morsell and his teammates to figure things out offensively before the team begins the full slate of Big Ten games on Christmas Day.

Turgeon hopes having eight days off since the Rutgers game will allow his squad to take the next step as an offensive unit, whether it’s led by Morsell or someone else.