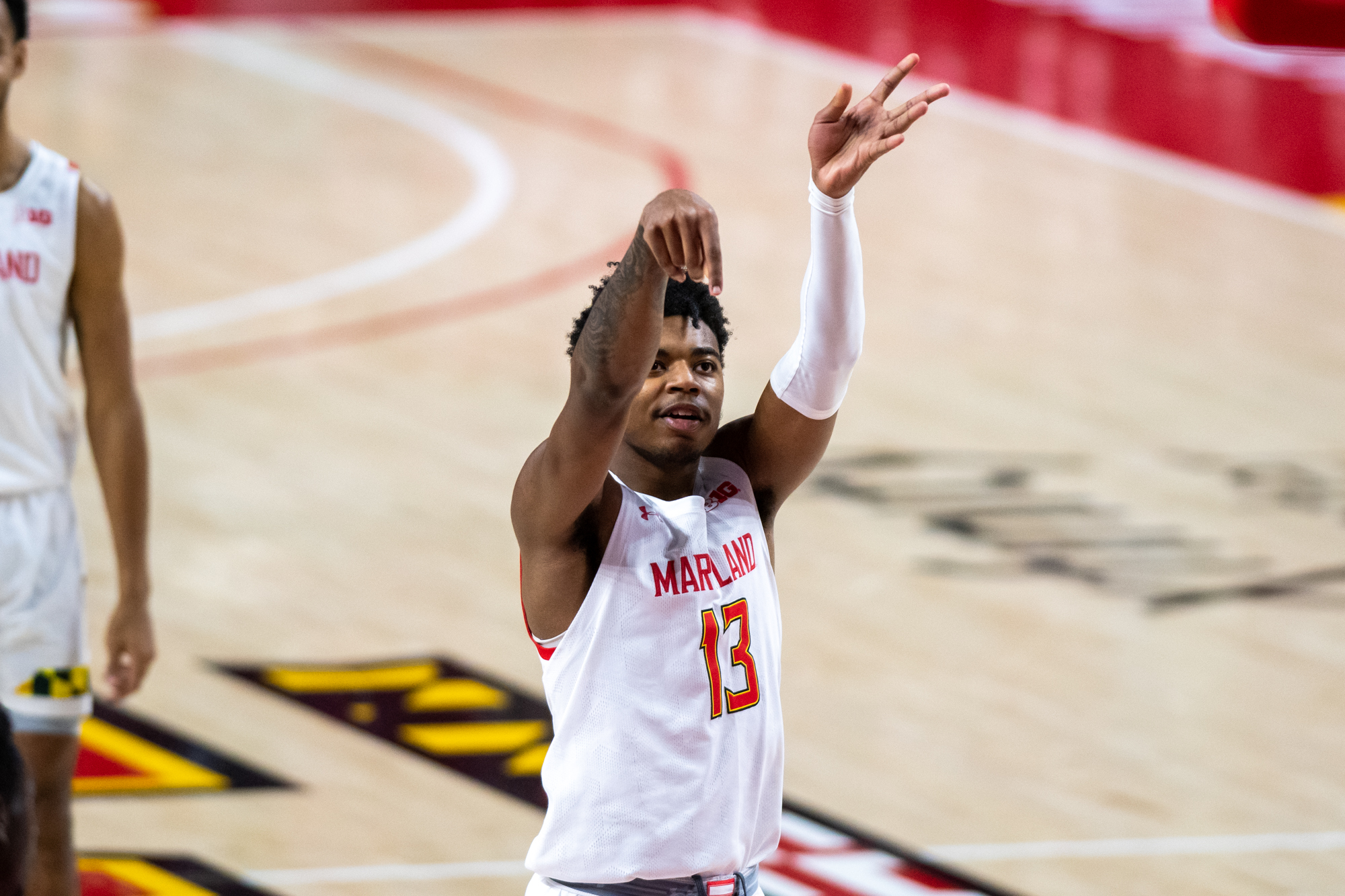 It had all seemed so unlikely just a day earlier.

Hakim Hart toiled in practice before his breakout game against Saint Peter’s. He clanked shot after shot, his confidence rattled. Eventually, the Maryland men’s basketball guard opted for a more passive approach, passing up an open look.

Coach Mark Turgeon was not pleased.

“We want him to look for his shot,” Turgeon said. “I said, ‘You can’t be one of those guys that misses your first two shots and thinks you’re going to miss your third.’”

Hart wouldn’t have to worry about missing Friday afternoon. He went 11-of-13 from the field, 5-of-7 from the three-point line and 5-of-7 from the charity stripe, notching a career-high 32 points to lead the Terps to a commanding 33-point victory.

Although the sophomore is expected to return to the bench in the coming fixtures, his growth — both physical and mental — has made him a valuable contributor for Turgeon’s squad, a journey made all the more sweet after Hart’s freshman year struggles.

“We knew he was a good player when we got him,” Turgeon said. “He’s kinda grown … maturity-wise and [feels] more comfortable on the court.”

A three-star prospect per 247Sports, Hart arrived in College Park to little fanfare. He played sparingly as a freshman, breaking double-digit minutes in only five of his 18 appearances. He wasn’t shy about his three-point stroke — 27 of his 36 shot attempts were from beyond the arc.

He was inefficient, however, shooting 22 percent from the field and a paltry 15 percent from three. It all came to a head during Big Ten play. Hart saw the floor in just six conference games, failing to make an appearance between Jan. 10 and Feb. 23.

“He just couldn’t get it going,” Turgeon said.

Facing a spate of departures — and an uncertain offseason — Turgeon’s squad was in desperate need of an impact player. And although Eric Ayala, Darryl Morsell and Aaron Wiggins were expected to carry the brunt of the scoring load, much of the Terps’ prospects hinged on whether its depth players could step up.

Hart seemed like the perfect candidate for improvement. He sprouted over the offseason — he now stands at 6-foot-6, an inch taller than he was when he came out of high school.

His game grew, too. In high school, Hart was a scorer. He’d fill it up from range with relative ease. He also showed a penchant for attacking closeouts and getting to the rack when defenders were too overzealous to his shooting threat.

Those skills frayed a bit as a freshman. But away from the glitz and glamour of Maryland’s practice facilities, Hart’s game flourished. His shot release got quicker and his defensive effort, which drifted at times last year, got more consistent.

Come the start of the season, it seemed Hart was primed to break out.

“He has a different energy about himself, a different confidence,” Ayala said prior to the Terps’ season opener against Old Dominion. “It’s been exciting to watch him grow as a player from his freshman year to now.”

Hart showed inklings of that burgeoning confidence against Navy, scoring a then-career-high 11 points in 19 minutes, knocking down each of his two three-pointers on that day.

And on Friday, Hart shook off any signs of passivity. His coaches had been in his ear, pushing him to take his chance with Wiggins unable to start due to an elbow injury.

“All the coaches [said] pre-game, ‘Be ready, be confident and just shoot the ball,’” Hart said. “It just gave me confidence to go out there and score.”

Brandishing a refined shooting stroke, Hart went to work. He scored 13 in the first to push the Terps out in front. His 19 points in the second half sealed the win.

And as shot after shot found the bottom of the net, the other parts of Hart’s game began to shine. The sophomore finished with a game-high four steals and three rebounds, matching his career-high total.

“It felt great, just showed all the hard work I did in the summer,” Hart said.

Excitement rained down Xfinity Center’s rafters with each Hart bucket, prompting a frenzied response from his teammates. The journey — from sparingly played benchwarmer to big-time performer — seemed improbable just a year ago.

It’s unlikely that Hart will be able to recreate that level of performance for the Terps. It’s the first time a Maryland player has scored 30-plus points on 80 percent or better shooting since John Gilchrist did it in 2004.

But for Hart, whose role in Turgeon’s squad looked so uncertain just a year ago, that doesn’t matter. His Maryland career has officially gotten going.

It doesn’t look ready to stop any time soon.