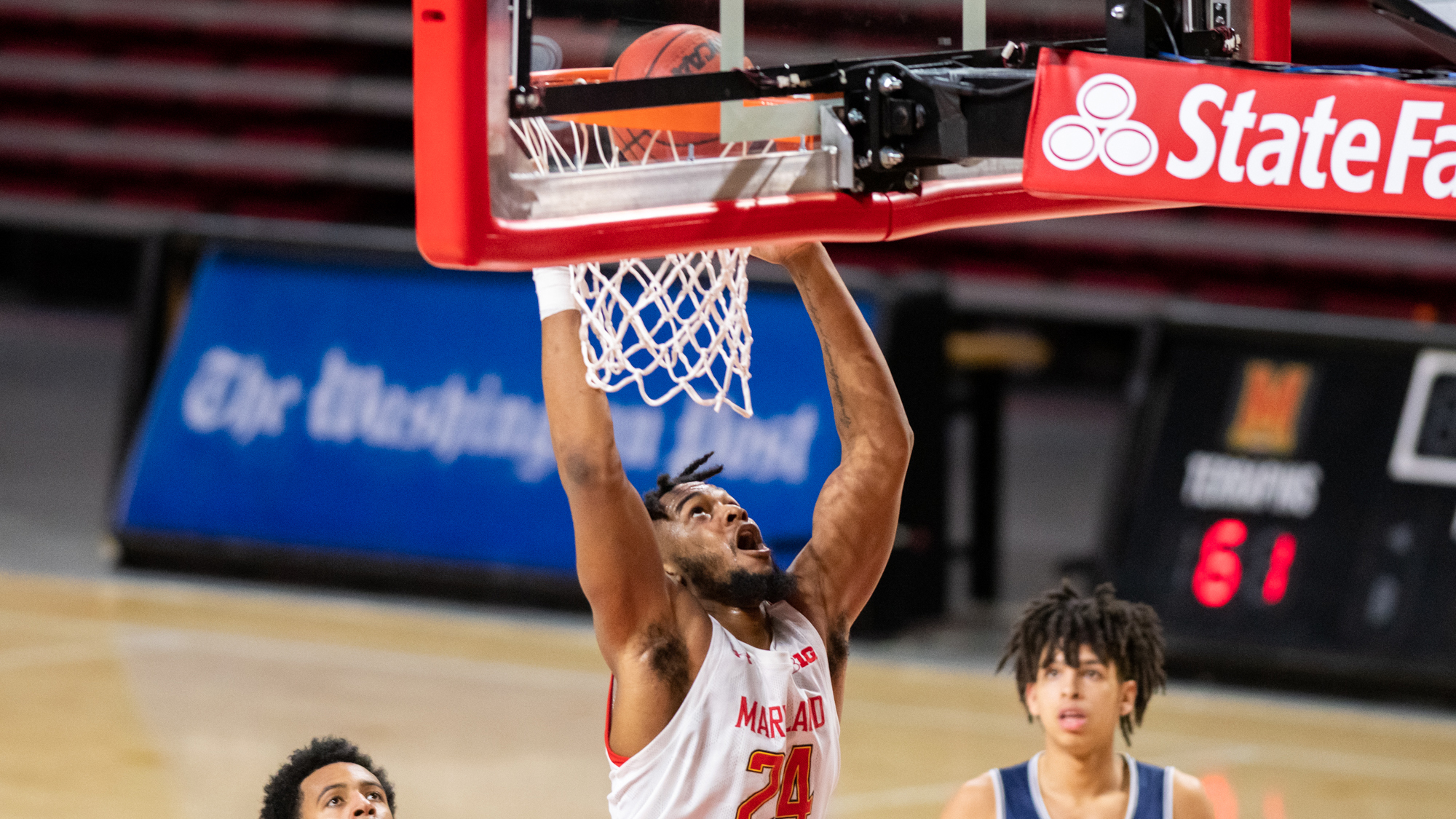 There was a calmness to it all for Donta Scott. He was off-balance, swarmed in a sea of limbs on the edge of the baseline, deep into Maryland men’s basketball’s game against Mount St. Mary’s on Sunday. Jairus Hamilton crept underneath the basket, stretching his arms to signal his openness.

Scott rose above the Mountaineers’ double team, bouncing a pass into Hamilton’s path. And as Hamilton slammed the ball home, the sophomore guard celebrated with a gleeful point to his bench.

It was a moment that showcased Scott’s growth as a playmaker. Throughout two games, Scott has shown signs of being a more well-rounded threat, and his offensive versatility has been central to Maryland’s success so far this season.

“I’m always going to be confident in my game,” Scott said. “[I’m] just knowing what my team needs and just going out there and trying to provide for my team.”

But Scott has always been a good passer — he showed as much in high school and in the gyms of Philadelphia. He played alongside fellow Terps guard Hakim Hart, rising up the ranks to become a consensus four-star recruit and flashing his distributive ability at Imhotep Charter.

“Donta was a really good passer coming out of high school,” coach Mark Turgeon said. “Hopefully he’ll be able to do that for us this year.”

Yet, in his first season in College Park, Scott was more of a spark plug, often tasked with playing out of the post alongside Jalen Smith. And he performed that role dutifully, averaging 5.9 points on 44 percent shooting while racking up over 20 minutes per night.

He could score with relative proficiency, making free throws at an 85 percent clip while shooting a respectable 31.6 percent from three. But he wasn’t much of a creator, notching 17 assists in 31 games.

Scott’s freshman campaign was a platform to show what skills he could offer Turgeon’s squad. In contrast, this offseason was about adding new layers to his game — a little more shake to his handle, a little more consistency in his passing — that could be the difference to a Maryland side still finding its way after losing Smith and Anthony Cowan.

For Scott, that meant tapping into his playmaking past. Scott was a confident ballhandler at Imhotep, employing a variety of crossovers and pullbacks to get to the rack and create.

“Being the ballhandler that I used to be and being more confident … doing some of the similar things I did in my high school season,” Scott said. “Not just being a forward but being that extra guy if they need me to bring the ball up.”

Scott’s growth displayed itself in the opening three games of the season, tasked with keeping the ball moving on the perimeter and helping get his bigs involved early and often.

But that physicality and willingness to bang around in the post still remains. It was that strength and balance that allowed him to dish Hamilton on Sunday — a player Scott has had his fair share of paint battles with, Turgeon said.

And now, Scott blends that 230-pound physique with finesse. Armed with an expanded array of moves — as well as an improved jumper — he seems capable of getting into positions to create scoring chances.

“He got wherever he wanted [to] on the floor,” guard Eric Ayala said.

Scott’s evolution as an offensive force was evident in that feed to Hamilton, a blissful figure celebrating his new teammate’s emphatic flush, even with the game already decided.

It’s a development the Terps hope will continue, especially with the schedule due to ramp up in the next few weeks.