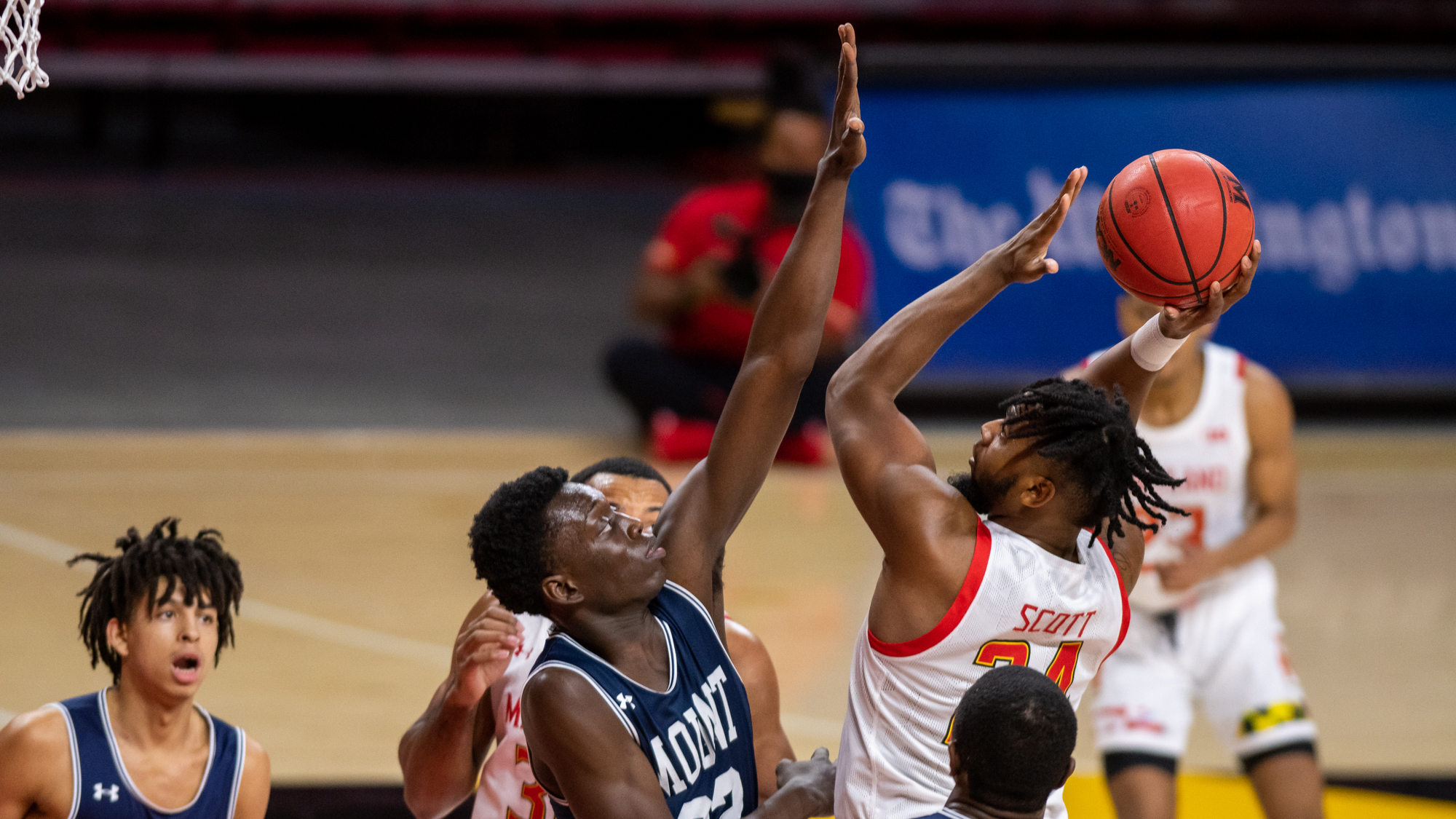 Malik Jefferson rested on the right block, surveying his options. The Mount St. Mary’s forward had been a force throughout the day, consistently finding space in the paint. And with the game knotted at 56 and Maryland men’s basketball reeling, he knew exactly what he wanted to do, driving into the chest of Chol Marial.

The Terps’ center couldn’t handle Jefferson, who floated a hook over Marial’s outstretched grasp to give the Mountaineers their first lead since the five-minute mark of the first half.

And although Maryland responded, eventually cruising to a 79-61 victory, the lack of a dominant big proved pivotal in a game far closer than the scoreboard indicated.

“I welcome a game like that where we’re actually behind in the second half and have to gut it out,” Turgeon said. “[It] was great to see our guys [do] it.”

The Mountaineers started the game as the brighter of the two sides. Guard Jalen Gibbs was a nuisance for Maryland’s perimeter defense, splashing four three-pointers to pace Mount St. Mary’s early. Meanwhile, Damian Chong-Qui, the Mountaineers’ diminutive floor general, snaked his way into the paint routinely, creating space — and opportunities — for his bigs.

Malik Jefferson was often the beneficiary of Chong-Qui’s penetration. Stronger and quicker than Chol Marial, he found joy on the block, notching 10 points in the first half. The 7-foot-2 sophomore, starting his first ever college game, lasted just two minutes before being pulled, unable to match Jefferson’s physicality as the Mountaineers raced out to a 21-12 lead.

“Jefferson inside was terrific,” Turgeon said.

However, Maryland soon recovered, fueled by the backcourt trio of Aaron Wiggins, Eric Ayala and Hakim Hart. Wiggins was aggressive from the start, opting for drives instead of jumpers. Ayala showed off his increasingly reliable mid-range game, rising above the likes of Chong-Qui and Gibbs to knock down a handful of 15-footers.

As for Hart, the sophomore knocked down a pair of threes to swing the game back in the Terps favor. The Philadelphia native flashed an improved shooting stroke against Navy, putting up a career-high 11 points and looks to have emerged as a more steady bench option than he was last year.

“Hakim has been continually getting better every day,” Ayala said. “His effort, his energy has been way different from when he first got here.”

The Mountaineers continued to hang around, though. Gibbs knocked in another three, Jefferson continued to cause issues in the block and the fouls began to pile up.

The Terps’ nine-point halftime advantage shrank to just three with 10 minutes left. Then, Chong-Qui feigned a drive, stepped back beyond the arc and fired. The ball fell threw, knotting the game at 56.

Jefferson soon gave the Mountaineers the lead with his hook shot. However, the Terps responded. Jairus Hamilton splashed home a three, followed up by a Donta Scott lay in through traffic. And Eric Ayala capped it off, slotting from beyond the arc from a Hamilton feed to push the Terps back in front.

“They played really well,” Ayala said. “It forced us to really play the best of our abilities.”

The Terps’ slim lead shortly became a chasm. As the Mountaineers offense stalled, Maryland found another gear. Hamilton canned a three, Scott flew down the lane and dunked before notching another three points of his own. Just a few minutes later, and the Terps had a 15 point lead — leaving the visitors flailing.

And although the scoreboard read comfortably in Maryland’s favor, the Terps flailed at times. A lack of an interior presence may be cause for concern, especially against teams with dominant bigs. Still, Maryland performed defensively down the stretch, and shared the ball well enough to overcome an early scare.