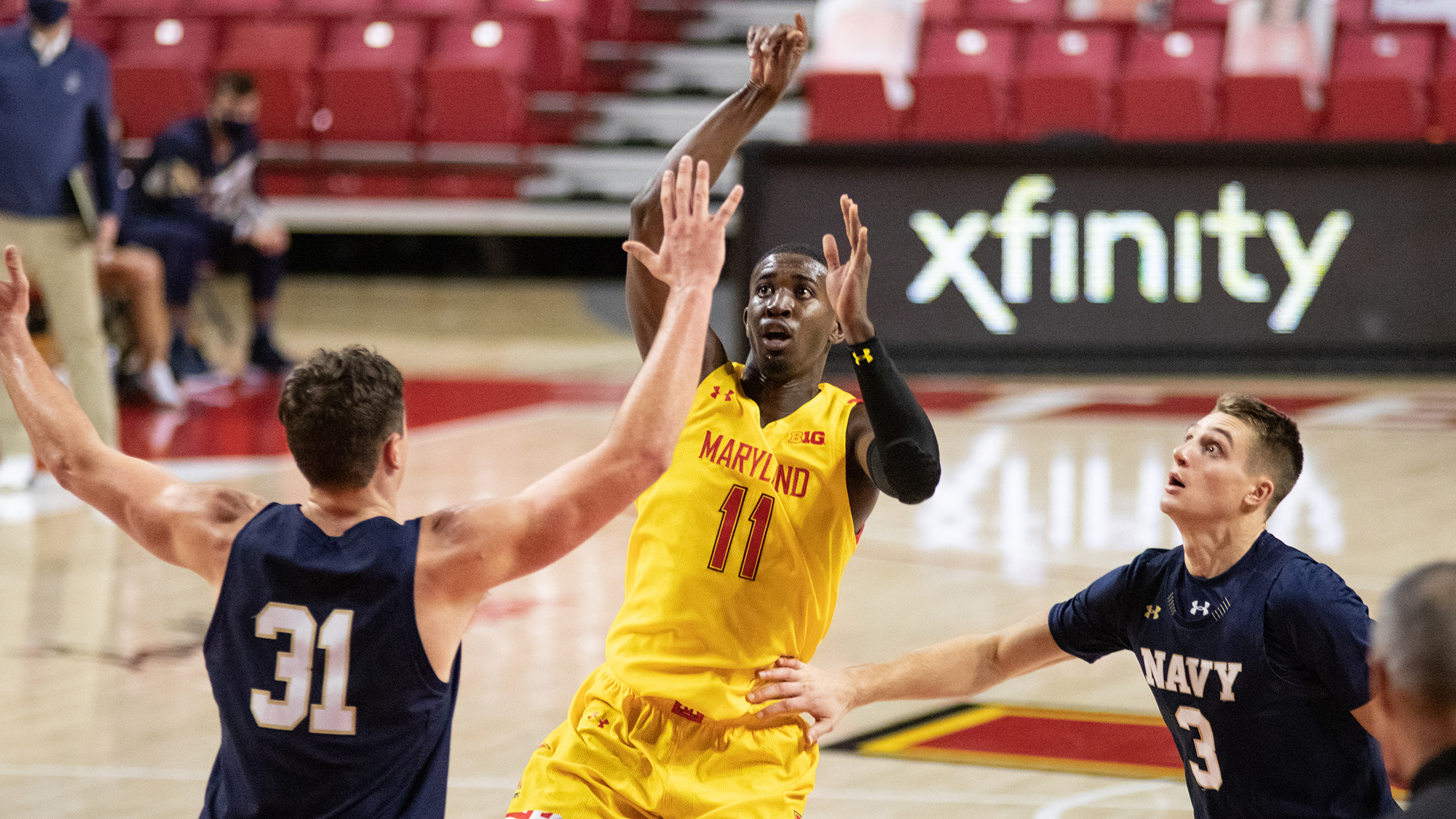 Guard Darryl Morsell pulls up for a shot in Maryland's 82-52 win over Navy on Nov. 27, 2020 at Xfinity Center. (Julia Nikhinson/The Diamondback)

Darryl Morsell is used to being the leader. The Maryland men’s basketball senior guard has started 62 of his last 66 games, making his impact known on both the offensive and, more often than not, the defensive end.

Galin Smith’s story is different. The Alabama transfer averaged an unremarkable 3.2 points and 2.3 rebounds during his time in Tuscaloosa. Much of his influence centered on intangibles rather than production: setting solid screens and providing a physical presence in the Crimson Tide’s backcourt.

Despite their unique backgrounds, it was that inside-out tandem that proved pivotal to the Terps on Friday afternoon. Mark Turgeon’s squad toiled at times in the first half, plagued by turnovers and an inability to capitalize on Navy’s offensive wobbles. But Morsell and Smith provided a steady platform for Maryland to take control.

And that platform was paramount as the Terps cruised to an 82-52 victory over the Midshipmen in which Maryland shot 68.2 percent from the field, its highest shooting percentage since 1986.

“We don’t have the size and the physicality that those guys have,” Navy coach Ed DeChellis said. “That’s just the difference in the physical play in the sense that they’re just very good athletes and very good basketball players.”

Much of that physicality stemmed from Morsell and Smith, who made their presence felt early on.

It started with Morsell, who continued to show off his all-around game after a 12-point, eight-assist, four-rebound performance in the season-opener against Old Dominion. The senior netted from deep early, just as he did against the Monarchs.

That improved shooting stroke continued to cause the Midshipmen problems, even as the Terps’ offense waned throughout the first half. There were a couple confident mid-range pull-ups in transition. And Morsell also showed off his post game, shimmying along the block before hitting on turnaround jumpers.

“You think about where he was when he got here and where he is with his shot now, it’s pretty amazing,” Turgeon said. “I think it’s going in every time.”

He was often joined by Smith, who rarely veered from the paint, instead preferring to drive his shoulder into the chest of his defender. More often than not, the Clinton, Mississippi, native would then opt for the hook shot, showing off a soft touch in the process.

The senior tallied eight points in the first half, a welcome development for a Maryland side still looking to fill Jalen Smith’s gaudy production in the frontcourt.

Despite shooting 60 percent from the field in the first half, though, the Terps toiled. The offensive fluidity that was at the forefront of an impressive second-half display against Old Dominion was no more. Maryland gave the ball away 10 times in the first half, more turnovers than in the whole of Wednesday’s game.

With Morsell and Galin Smith leading the charge, though, that advantage would soon swell.

Smith slammed home a two-handed dunk less than a minute into the second period. Maryland’s bench mob responded, jumping into its own frenzied celebration as Smith jogged back down the floor.

“That was our focus today,” Morsell said. “Get in the paint and make plays … I enjoyed feeding him and getting him some easy buckets.”

Turgeon’s press, which caused many issues for the Monarchs on Wednesday, sprung to life as well. Morsell was the catalyst, his long arms and quick feet making life difficult for the Midshipmen’s ballhandlers.

Navy shot 40 percent from the field, a step down from its efficient 47.7 percent display that powered DeChellis’ side to its victory over George Washington on Wednesday.

The Midshipmen’s struggles from the field opened up space for the Terps’ attack. Guards Eric Ayala and Aaron Wiggins — held largely quiet in the first half — came to life, stroking a combined six three-pointers in the second half.

For Wiggins, much of Maryland’s three-point threat came from the attention Morsell and Smith drew inside the paint.

“Having a solid post presence, it definitely opens up the court a little bit,” Wiggins said. “The defense has to worry about what’s going on inside a little bit more, and that only creates for cuts and screens and guys to get open around the perimeter.”

Ultimately, it was that dynamic duo — Smith and Morsell — that got the scoring started and kept Maryland firmly out in front, even as it took their teammates some time to adjust to the pace of the game.

And as that halftime lead ballooned to as much as 34 late in the contest, it looked like maybe — just maybe — the Terps had found a new inside-out duo to lead the way.