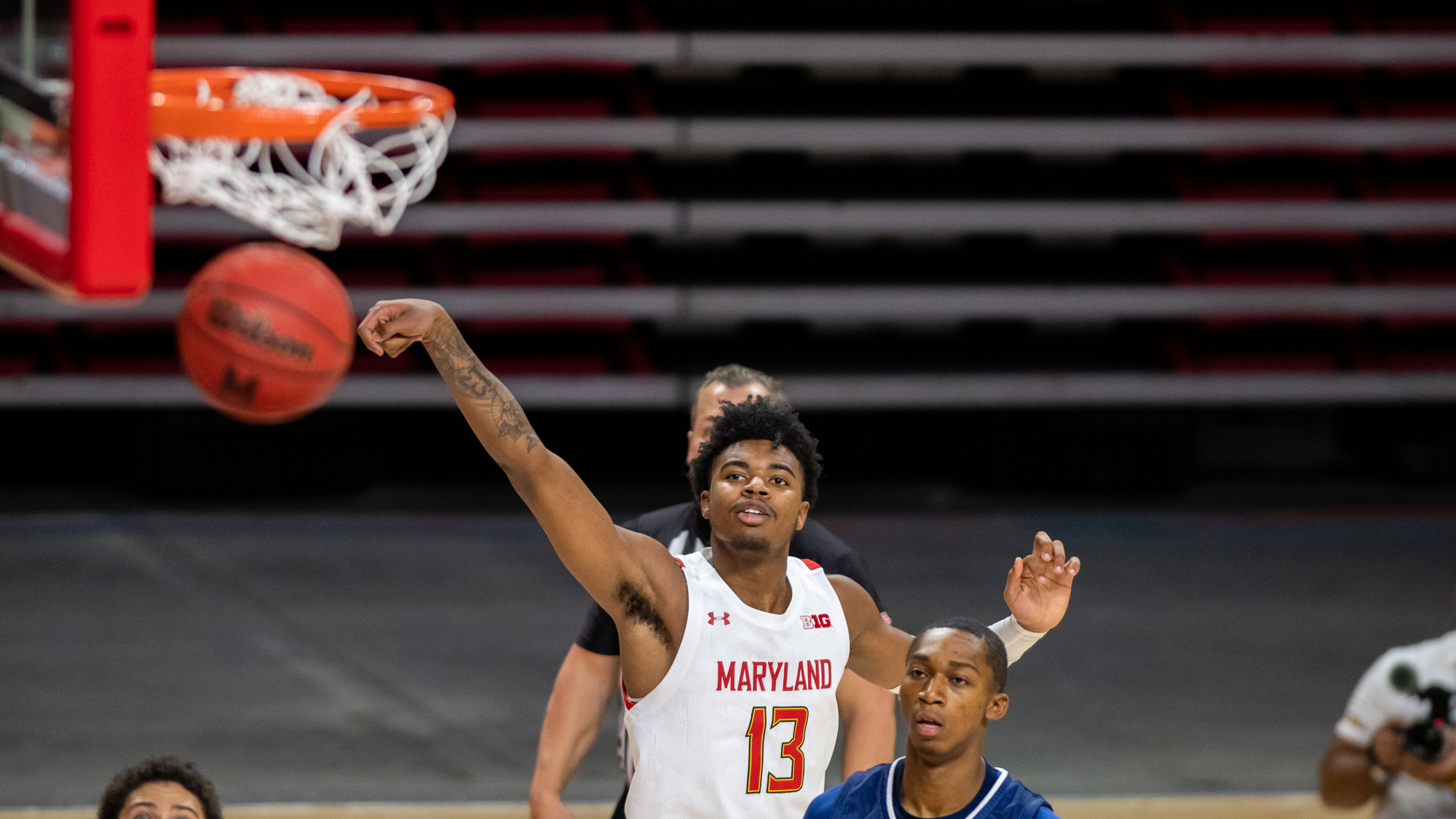 Hakim Hart watches his shot swish through the hoop during Maryland's 90-57 win over Saint Peter's on Dec. 4, 2020 at Xfinity Center. Hart had a career-high 32 points on the day. (Joe Ryan/The Diamondback)

As Aaron Wiggins spun around the scrum of defenders that surrounded him, Hakim Hart stood on the right wing. The sophomore guard had been a three-point threat all game up to that point, having already knocked down a trio of shots from beyond the arc.

And Hart waited. He watched on as Watson’s leap went beyond him. Then, he stepped inside and splashed a mid-range jumper.

That sort of patience hasn’t always been part of Hart’s game. But it was that care, that willingness to take what the defense offered, that made Hart — and Maryland men’s basketball — so effective on Friday. The Terps, led by Hart’s career-high 32-point outburst, cruised to a 90-57 victory over the Peacocks.

“I knew he could make shots,” coach Mark Turgeon said. “He’s gaining a lot of confidence from his coaching staff and from his teammates… he’s growing into his role.”

Hart wasn’t supposed to start on Friday, Turgeon said. He was platooning Aaron Wiggins, who injured his elbow earlier in the week and hadn’t practiced in days.

Still, after scoring 11 against Navy last Friday, Hart looked fresh. And he got involved early, spotting up and hitting from beyond the arc after feeding Galin Smith with an entry pass.

He mirrored his feat 40 seconds later, whetting the nylon from distance once more.

“All the coaches [said] pregame be ready, be confident and just shoot the ball,” Hart said. “It just gave me confidence to go out there and score.”

The margin would soon grow, with the trio of Hart, Ayala and Donta Scott fueling the Terps.

Ayala was a steady presence throughout, finding success at the rim, a departure from his shot selection at the start of the season. Through three games, he had been scintillating, shooting 72 percent from the field. Many of those shots have come outside the paint.

On Friday, the junior opted for a more aggressive approach, blowing past Saint Peter’s guards. Ayala scored eight points in the first half, pushing the tempo for Mark Turgeon’s squad.

Scott built on his hot start to the year, continuing to show flashes of the offensive versatility that has prompted Turgeon to give him a run as a primary playmaker. The sophomore guard wreaked havoc in the paint, heading to the free throw line eight times as Peacock defenders toiled against his size and strength.

Scott slotted from three, as well — a part of his game that has come on leaps and bounds. Prior to Friday’s contest, Scott was shooting 50 percent from beyond the arc.

“His game is phenomenal,” forward Jarius Hamilton said. “He can bring the ball up the court, he can rebound with all the big men, he can shoot, he can finish, he can facilitate. He’s really a huge piece to our offense.”

All this amounted to a 19-point Maryland advantage come halftime, despite 11 first half turnovers.

If the first half was a sprint, the second half represented more of a slog for the Terps — at least at the start.

Turgeon’s squad shot poorly in the opening 10 minutes of the frame. Maryland shot 4-of-18 from the field to start the half, struggling to get the same open looks that paced it in the game’s first 20 minutes.

“We were a little bit out of it,” Turgeon said.

Hart’s scoring touch remained, though. Saint Peter’s keyed on him, sending multiple defenders to try and quell his scoring streak.

It didn’t work. Hart broke 15, then 20, then 25, then 30 with ease, netting from deep and getting to the rack with impunity. He finished with 32 points, 19 coming in the second half, to fuel Maryland as its lead swelled down the stretch.

And as he drifted to the bench to receive his curtain call, Hart’s progression was clear.

He hasn’t received many moments like that in his college career. But with buoyant confidence and a rapid release, perhaps Friday’s display was the first of many.