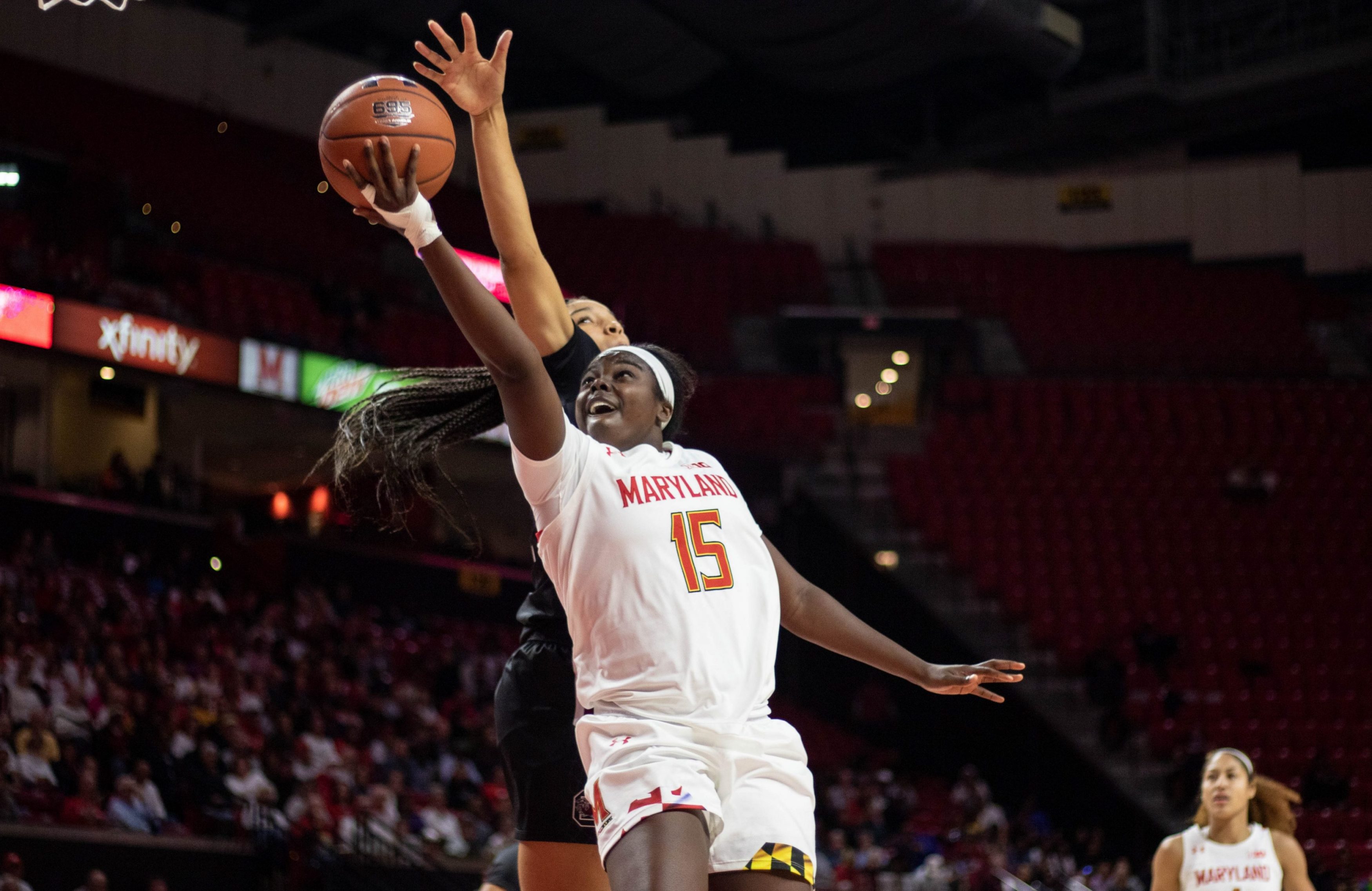 In Sunday night’s contest against Arkansas, Katie Benzan did something she’d done countless times before. A cutter created just enough room for her on the wing, where she caught a pass in rhythm to drop in a three.

But this one was different.

Her triple was a record-breaking one on a record-breaking night for the Terps, who scored 57 points in the first half and made 16 threes on the night, part of a stellar offensive performance that demonstrated No. 12 Maryland’s depth as it routed No. 14 Arkansas, 115-96.

The Benzan three tied the school record for most individual three-pointers made in a game. The rest of the Terps were in on the scoring, too. They tallied the most points in Gulf Coast Showcase history and eclipsed the total points a Maryland team has scored against a ranked opponent in the program’s history. Benzan was named tournament MVP, and guard Angel Reese made the All-Tournament Team.

“I think it’s pretty exciting, I mean when you talk about beating a record like that from so long ago,” Frese said. “I think it speaks volumes of what this team is capable of.”

Benzan started slow — missing three of her first four three-pointers. But she was white-hot from there, nailing 7-of-10 shots from behind the arc the rest of the way, finishing with 28 points. Despite the initial misses, Benzan had the support of her teammates to keep firing away from deep.

“Faith Masonius came up to me and just said, ‘Katie, keep shooting we know the next one’s gonna fall,’” Benzan said. “Same from the coaching staff, they just have so much support and confidence in me that they just kept telling me to shoot, so I kept shooting.”

One night after blowing an 11-point halftime lead to No. 24 Missouri State, coach Brenda Frese’s squad appeared determined to not repeat that performance. Their intent showed in the second half, as Maryland came out in the third quarter with heightened energy, netting 17 points in the first four minutes and outscoring the Razorbacks by eight in the frame.

In a demonstration of its domination, Benzan drilled a three-pointer, and Diamond Miller immediately stole the inbounds pass and finished through a foul for an and-one.

“No one was gonna feel sorry for us. We understand we’re gonna get every team’s best shot,” Frese said. “Pregame was about having pride and we do. I’ve seen the fire and the competitiveness of our team.”

Her follow sharpshooting transfer, Chloe Bibby, showed off her long-range abilities. She went 5-of-7 from behind the arc, finishing with 23 points and 12 rebounds for her first double-double of the year.

[Maryland women’s basketball pulls away in second half to beat Davidson, 94-72]

The Terps started fast, as well, but did most of their early damage inside the paint during the early stages. Maryland dominated the glass in the first quarter, pulling down five offensive rebounds and scoring nine second-chance points. The hot outside shooting began the following frame, as the Terps made 80 percent of their threes and 55.6 percent of their shots.

“I mean honestly, as soon as the ball was starting off in the first quarter we were locked in,” Bibby said. “We were ready to go, there was no doubt about it, no doubt in my mind anyway the way that we were gonna get everything this game. The energy was just phenomenal on the bench.”

While she didn’t lead in scoring, Owusu made her impact in every part of the stat sheet, finishing with 12 points, nine rebounds, and seven assists. In the second quarter, she made key plays for her teammates, including a highlight-reel assist to Miller.

With 5:40 remaining in the second quarter, Owusu came around a screen near the right elbow, and then took a couple of lightning-quick dribbles before moving back to the three-point line. Two Razorbacks followed her, and Owusu found a cutting Miller, who finished through a foul. After going scoreless the prior night, Miller finished with a double-double, netting 19 points and 10 rebounds.

At least five players scored in double-figures, a feat the team has achieved in each of its first three games this season.

“You can see how dangerous we are when we’re just being unselfish,” Frese said. “Learning where everybody is at and making plays for each other.”

Maryland’s lone blip on the evening came at the start of the fourth quarter, as the Terps began the period 0-for-8 and saw their lead shrink to 19 at one point. However, a couple of key baskets near the end, including the record-breaking three by Benzan, dispatched the Razorbacks — and dispelled the demons of an abysmal second half the night before.

“I thought we played hard,” Frese said. “Putting a 40 minute game together against a really really veteran led experienced team, which is going to bode well for the future.”

CORRECTION: Due to a reporting error, a previous version of this article said Maryland women’s basketball broke the team record for total three-pointers in a game with 16 three-point shots. The team record is 17. This story has been updated.