Maryland women’s basketball pulls away in second half to beat Davidson, 94-72 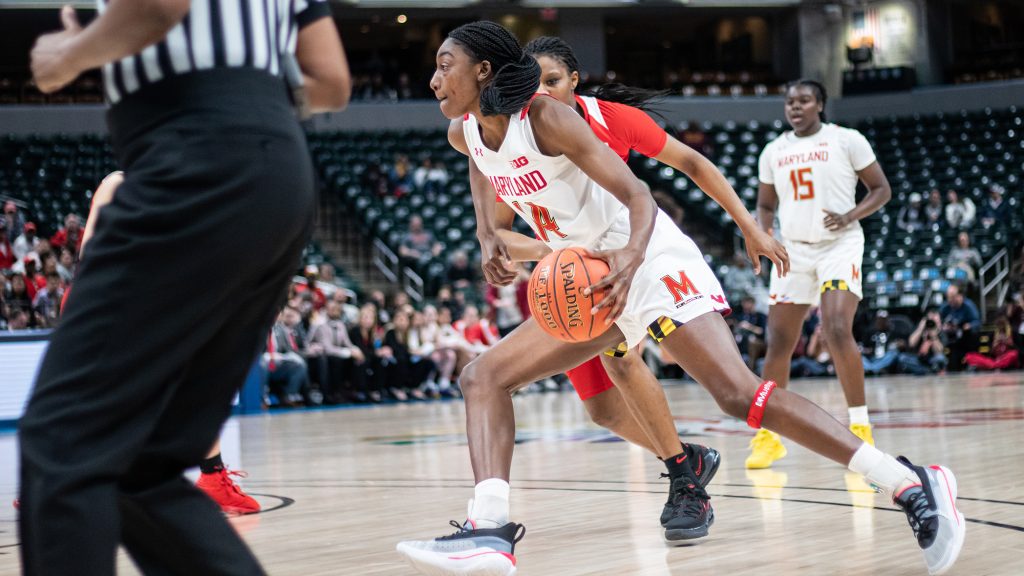 Davidson guard Chloe Welch thought she had a clear shot, one that would have brought her Wildcats squad within four points against Maryland. But then, a red blur came out of nowhere, swatting the attempt against the backboard. It was Angel Reese, who swiftly snagged the rebound before charging down the court and laying it in herself. It was one of 20 points for the highly touted player in her Maryland debut.

And the play was also one of many promising signs for a youthful Maryland squad looking to defend its Big Ten crown. After an offseason that lasted over eight months, the Terps overcame early foul trouble and an inconsistent shooting night to beat Davidson 94-72.

“Davidson came out and punched us pretty hard,” head coach Brenda Frese said. “I thought the difference was we were a lot more aggressive in the second half, I’m proud of our response. We settled in and played a much more disciplined second half.

Though the Terps stalled in the second quarter, a blistering start to the second half proved to be enough on the night. Maryland went 8-of-18 from the field and 11-of-13 from the free throw line in the third quarter and started the half with five straight buckets. That quick run made up for a lethargic first half showing in which the Terps were scoreless from behind the arc and saw their stars limited by foul trouble.

In her highly-anticipated Maryland debut, Reese endured a disappointing first half. Limited by two early fouls, she only played four minutes, but snagged four rebounds in her brief action. In the top recruit’s absence, Faith Masonius took the reins for the Terps, scoring 10 points on 5-of-7 shooting.

“The luxury that we’ve seen is that there is a lot of firepower on the team. I mean, everybody can score it,” Frese said. “We were able to take advantage of that. I thought her minutes were a huge spark for us off the bench, it gave us some great consistency.”

Davidson shot well from behind the arc in the first half, burying 36.4 percent of their shots, but they struggled significantly from the free throw line, making only 33.3 percent from the stripe. That, combined with a 0-of-9 shooting performance for Maryland beyond the arc, allowed the Wildcats to stick around.

In the second half, though, Reese showed why she was one of the top recruits in the nation. She scored seven points in the first four minutes of the third quarter, dominating inside with her height and length.

“I just played confident,” Reese said. “I didn’t know what was going to happen. I wasn’t really nervous, but my teammates gave me the confidence to just come out there and play my game.”

Still, foul trouble continued to hurt Brenda Frese’s squad, as the star guard trio of Reese, Ashley Owusu, and Diamond Miller, were limited to just 57 combined minutes. After a strong showing to start the third, all three were benched after tallying three fouls apiece.

“The foul trouble really hurt us in the first half,” Frese said. “We weren’t able to get any kind of rhythm.”

But there were moments when the trio starred together. Miller found cracks in the Davidson defense, driving to the hoop with regularity, either finishing at the rim or heading to the free throw line. She’d finish with 20 points on the night. She was substituted out of the game with just under three minutes after sinking two shots from the line — topping off her best scoring appearance to date.

“My shot was off, and when your shot is off, you have to go to the basket,” Miller said. “I was running the floor well, just trying to get my shots and help my team.”

After a shaky start to the game defensively, the Terps were able to clamp down in the second half, limiting Davidson to just shooting 37.5 percent from the field. The Terps also out-rebounded the Wildcats, and forced 15 turnovers. Those advantages made for a dominant second half display in which Maryland outscored Davidson 40-25.

That scoring depth was particularly apparent in the fourth quarter. With Reese and Miller given the freedom to play despite foul trouble, the Terps pulled away. Miller once again drove hard into the paint and finished through a defender to give the Terps a 18 point lead with 5:22 remaining, establishing an advantage Maryland wouldn’t relinquish.

The win showed flashes of the young talent for the Terps, with all three of the heralded guards producing despite truncated playing time due to the foul trouble. Maryland also showed that it could still play stifling defense, putting together a complete game to open the season with a win.