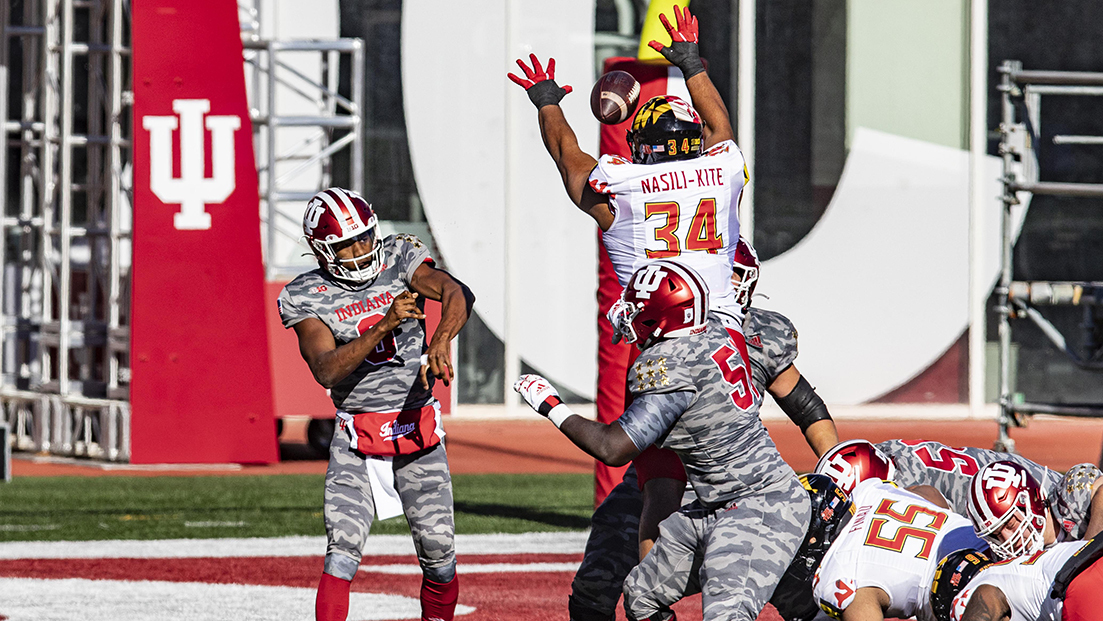 Maryland football knew the challenge it faced entering Saturday’s contest against Indiana. Against a highly-ranked opponent, the Terps were seeing game action for the first time in three weeks, all while down 23 players — including key starters Jeshaun Jones, Jake Funk, Tarheeb Still and Nick Cross — due to COVID-19 protocols.

That time off and shorthanded squad showed immediately in Bloomington, Indiana. From eight penalties to a shanked field goal on their first drive, the Terps looked every part a team that hadn’t taken the field since Nov. 7.

And those mistakes compounded as the afternoon wore on, as the No. 12 Hoosiers knocked off the Terps, 27-11.

“[It was] just bad, poor execution all game long,” coach Mike Locksley said. “We didn’t give ourselves a chance.”

Despite the rust, Maryland (2-2) moved the ball well early. It got inside Indiana’s 25-yard line four times in the first half but only capitalized on the last of those possessions with a 38-yard field goal.

The other drives ended in overthrown receivers and turnovers — quarterback Taulia Tagovailoa threw three interceptions on the day.

“That was just my fault … I got to stick to the basics with that,” Tagovailoa said. “Those opportunities are important and you never know when you’re going to have that back.”

And the Hoosiers (5-1) had several chances to take control against the Terps’ shorthanded defense, but Maryland held strong.

Ty Fryfogle — coming off consecutive 200-yard receiving efforts — and Whop Philyor were held without a catch in the first half, and quarterback Michael Penix Jr. only completed two passes in the period.

Though Indiana’s typically lethal aerial attack was quiet, the ground game picked up some of the slack. Four rushers — led by Stevie Scott — combined for 102 yards.

And on the Hoosiers’ lone successful drive in the first half, that rushing attack shined through. Scott took several direct snaps, with the misdirection ending with a three-yard trot into the end zone to open the scoring.

“The game before that, they had a lot of explosive plays,” defensive back Antwaine Richardson said. “So that was our key in the secondary. Just take away all the shots and make them run.”

The squads traded punts for the remainder of the half, and Indiana entered halftime up 7-3 despite being outgained by 98 yards.

On the opening drive of the third quarter, the Hoosiers appeared to pick up some steam. Philyor and Fryfogle recorded their first catches of the afternoon, and Scott led Indiana to within Maryland’s 5-yard line. But he was tripped up on fourth down, and momentum appeared to swing back to the Terps.

That changed on the next play. Tagovailoa ran an ill-conceived option, and the Hoosiers were not fooled. The sophomore signal-caller went down in the end zone, and Indiana tacked on two points to its lead.

“It was just a tremendous buzzkill,” Locksley said.

And it signaled the beginning of a downward spiral for the Terps.

Minutes later, Scott padded the advantage with a one-yard rushing score, and Indiana opened up a 17-3 lead after a two-point conversion. But on that drive, Penix landed awkwardly heading out of bounds after a run and hobbled off the field. He did not return to the game.

Maryland then went three-and-out on a drive that was a microcosm of the team’s struggles throughout the afternoon. Indiana forced a sack, then the Terps gained back the yardage with a run before, finally, Tagovailoa lobbed a poor pass that forced a three-and-out.

Indiana tacked on another field goal and touchdown, and Maryland withered away in the fourth quarter as its offense failed to find momentum. Despite a late touchdown, the Terps netted just 63 yards in the second half, capping an afternoon that showed just how much Maryland missed its full squad.

“We’re not the first team to have to deal with this,” Locksley said. “To lose the type of players we didn’t have out there, it’s not about that as much as it is, we had good enough players there today that have to be prepared the right way to go out and execute.”