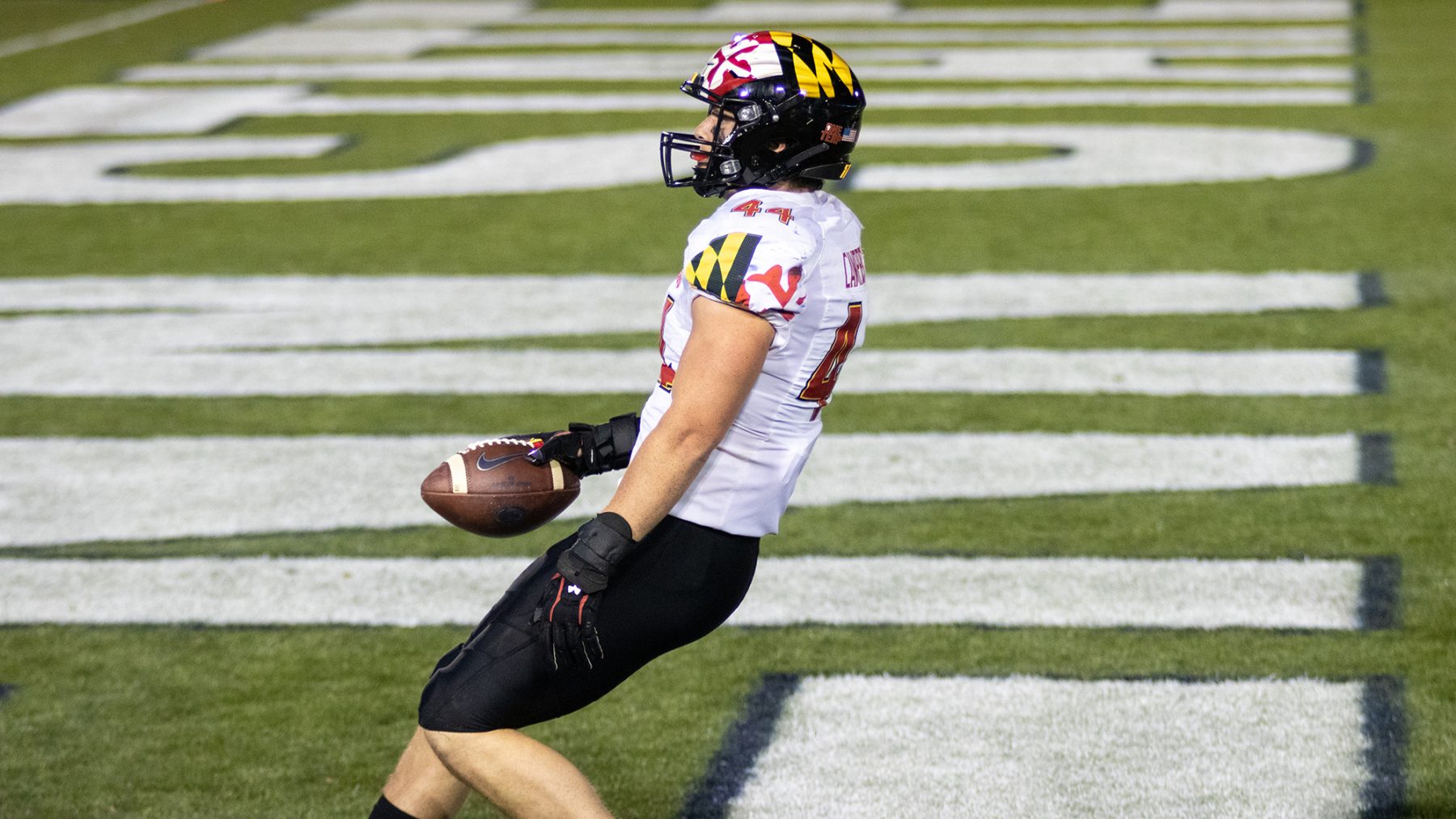 Maryland linebacker Chance Campbell sprints into the end zone after recovering a Penn State fumble during the Terps’ 35-19 win over the Nittany Lions on Nov. 7, 2020 at Beaver Stadium in University Park, Pennsylvania. (Julia Nikhinson/The Diamondback)

Chance Campbell had not scored a touchdown in nearly three years. A two-way player at Calvert Hall College High School in Towson, Campbell punched in a score as a running back in his final game with the Cardinals against rival Loyola Blakefield. It was a jubilant moment that capped a victory — and his last touchdown for a long time.

When Campbell committed to Maryland football in 2017, he left behind his post in the backfield and focused on his other main position — linebacker. The Terps’ defense struggled in his first two years on the team, and he only began to see more playing time his sophomore year.

Now a junior, Campbell has taken charge as an everyday starter and finally found the end zone again Saturday, scooping up a Penn State fumble and taking it 34 yards to put Maryland ahead 35-7 in the third quarter. It was a statement moment against one of the Terps’ biggest foes and cemented his growth from reserve to veteran leader.

“The position he plays … is kind of the quarterback on our defense,” coach Mike Locksley said. “He’s one of those guys that brings the juice each and every day.”

That tenacity has been evident in Maryland’s first three games this season. Campbell leads the Terps with 34 tackles while recording 1.5 sacks, in addition to the defensive score. He has been a commanding presence all over the field, particularly in the team’s first two games when the defense struggled.

He was often the only playmaker in those contests, leading the team in tackles against Northwestern and Minnesota. That fast start is unsurprising to Locksley, who said Campbell’s past game experience prepared him for this moment.

“What we’re starting to see out of Chance is the consistency in how he plays,” Locksley said. “He’s been a huge bright spot.”

Campbell played sparingly as a freshman before breaking out as a sophomore. Though he only received two starts in 2019, Campbell was fifth on Maryland in tackles, mainly coming off the bench.

When Keandre Jones — one of the team’s top linebackers last season — graduated, Locksley needed a player to fill that leadership gap. He turned to Campbell, who responded by working to grow into the role this offseason. He bulked up to prepare for the physicality of everyday Big Ten play, picked apart film and studied his predecessors’ leadership styles to become the captain his coach needed.

That work has paid off, but Campbell is not taking his role for granted.

“[I’ve grown in my] play recognition,” Campbell said. “The coaches put together a pretty good spreadsheet of some tendencies, and [I’m] trying to understand those and then watching film on my own to try and hammer those home so that when I see it I can react a little bit faster.”

And that readiness to study and willingness to lead has driven Campbell in his new role.

Meanwhile, his teammates recognize his value.

“It’s good to have somebody on the front seven who’s a big leader like that,” safety Nick Cross said. “Chance is a great football player, great person on and off the field. He studies the game, practices hard, and when it’s gametime, he just plays lights out.”