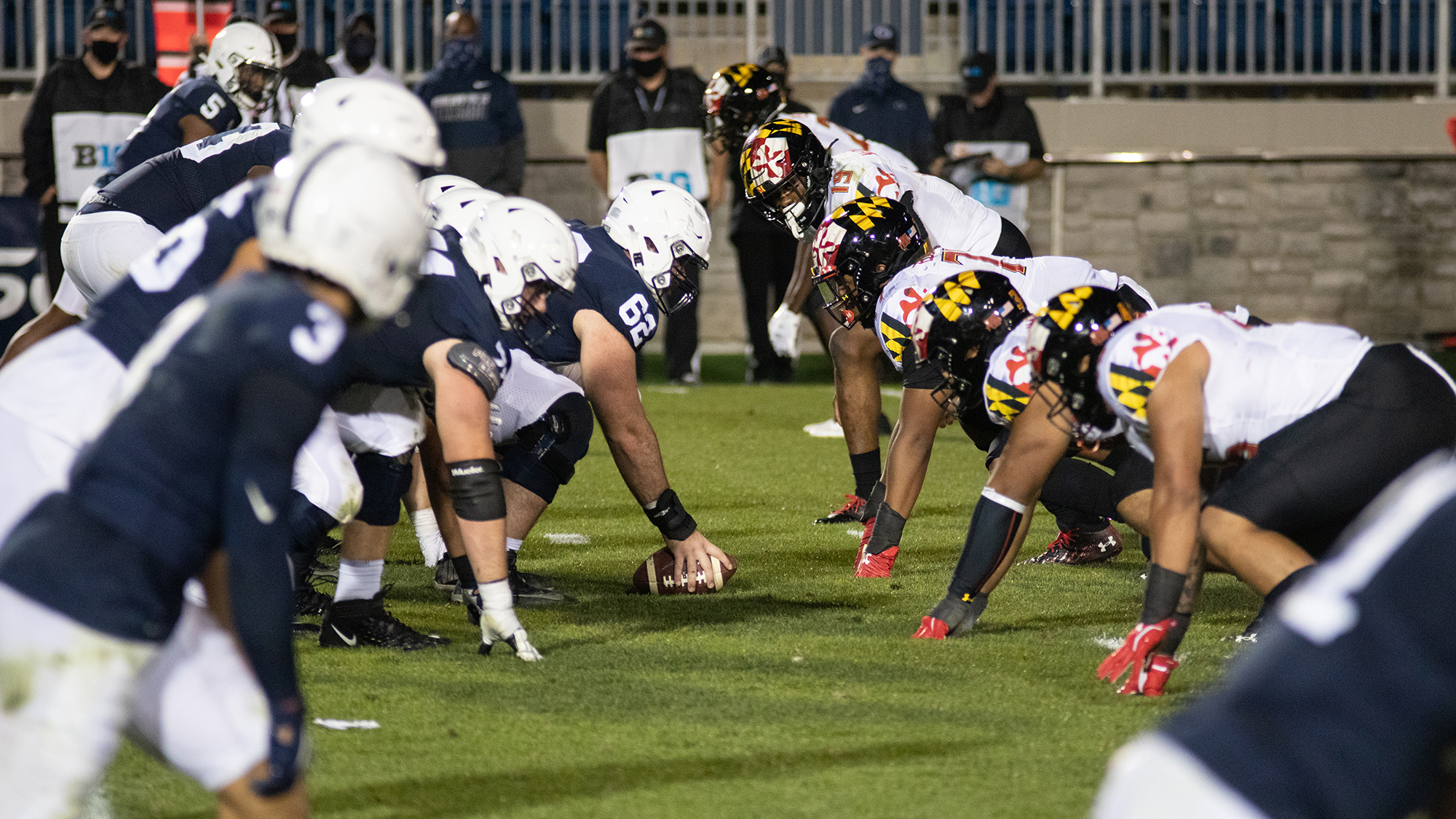 Maryland football's defensive line prepares for a Penn State snap during the Terps' 35-19 win over the Nittany Lions on Nov. 7, 2020, at Beaver Stadium in University Park, Pennsylvania. (Julia Nikhinson/The Diamondback)

It was third-and-short near midfield, and Penn State needed a spark. Down 28-7 to Maryland football at the start of the second half, the Nittany Lions were looking to score and keep the game from getting out of hand.

Sean Clifford took the snap, faked a handoff to Devyn Ford and immediately found trouble — the Terps had broken through Penn State’s offensive line and were in the redshirt junior quarterback’s face. Clifford scrambled aimlessly, trying to find open space, but was crunched by Ayinde Eley and Nick Cross.

The hit jarred the football loose, and Maryland linebacker Chance Campbell scooped it up and found nothing but green turf ahead of him. He cruised into the end zone, putting his team up four scores and erasing any momentum the Nittany Lions had while Clifford was left on the ground wondering how to recover.

It was a sequence emblematic of the Terps’ dominating performance Saturday in University Park, Pennsylvania, one in which Maryland’s oft-maligned defense stepped up to squelch Penn State’s offense.

“That was our game plan,” coach Mike Locksley said. “We wanted to make him throw the ball to beat us.”

That was clear on the Nittany Lions’ first drive. While Clifford and his team progressed into the red zone on that series, the drive stalled due to key pass breakups from the Terps’ secondary.

And that was the best the quarterback looked all afternoon. He was sacked seven times and turned the ball over thrice — the first takeaways for Maryland’s defense all season. Clifford finished the contest 27-for-57 with 340 passing yards, though much of that came during the contest’s waning moments.

It was a startling performance from a signal caller who accounted for 452 all-purpose yards and four total touchdowns in a blowout of the Terps last year. Clifford never looked comfortable in the pocket Saturday, often running to escape defenders and wildly overthrowing his talented receivers.

Those mistakes led to a costly lack of rhythm.

“It’s going to start with myself. I’m not going to point a single finger,” Clifford said. “There’s plays that need to be made, and I need to make them.”

But what was maybe even more surprising than Clifford’s decline was Maryland’s defensive execution. In their first two games, the Terps allowed 43.5 points per contest and nearly 500 yards per match, struggling to contain the rushing attacks from Northwestern and Minnesota.

That script flipped against Penn State — Maryland’s front seven was relentless in its pressure, shutting down the Nittany Lions’ running backs and forcing Clifford’s off-target throws. And the team was not surprised by its performance.

“We were always really close to getting sacks, getting takeaways,” Cross said. “It was definitely something that was a big emphasis [in practice], and when we put our mind to something, we’re going to get it done.”

Now that the Terps’ defense has shown some of its potential, it will need to keep its head down as the schedule toughens. But there’s still work to be done.

Locksley was not pleased with how his team snoozed to the finish line, with Penn State scoring two late touchdowns to close the scoring margin. And while the front seven showed marked improvement and the secondary turned in a decent outing, they were frequently bailed out by Clifford’s errors.

Still, Cross and his young teammates now have one solid game to use as experience — one they hope can take them to the next level.