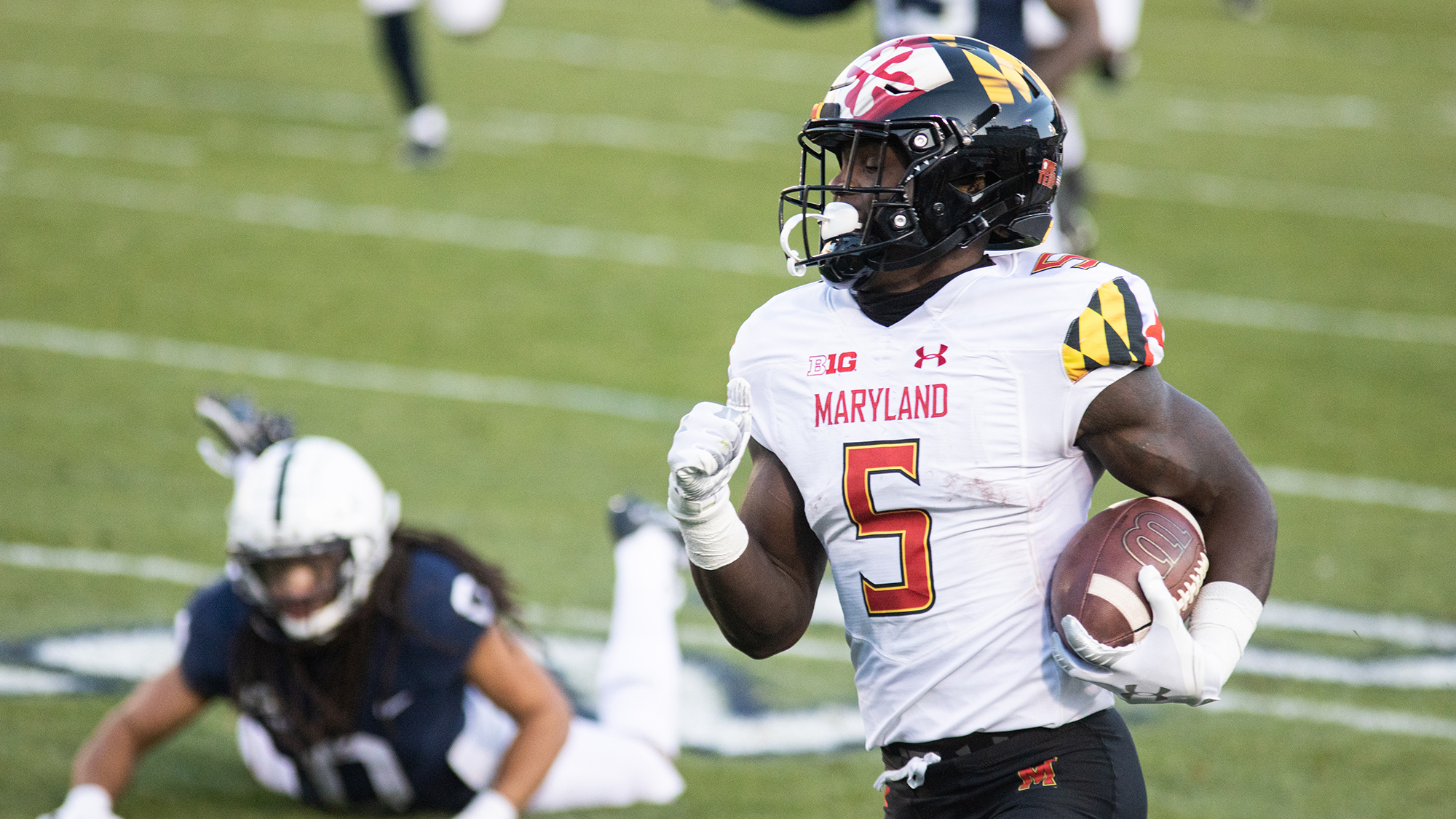 Rakim Jarrett turned around and did a little dance.

The true freshman had reason to celebrate. He had just blown by Penn State’s defense for a 62-yard touchdown, his second score of the first quarter. It was the start of a breakout night for the heralded wideout and also the start of a highlight-filled afternoon for Maryland football.

And its production matched the camera roll. The Terps left the Nittany Lions grasping for answers all afternoon Saturday in University Park, Pennsylvania, as Maryland ran away with a 35-19 win, its first victory over Penn State since 2014.

The Terps’ offense wasted no time getting started. Maryland (2-1) marched 75 yards down the field on its first drive, culminating in a 42-yard touchdown catch-and-run by Jarrett, who rode a block to cruise into the end zone and open the scoring. It was the Terps’ first touchdown against the Nittany Lions since 2016.

And many more followed.

Jarrett provided a near carbon copy two drives later, cutting across the field and grabbing Taulia Tagovailoa’s toss in motion before darting into the end zone — good for a 14-0 lead. He was a reliable presence all night for Maryland, enjoying a breakout game in which he tallied 144 yards and two touchdowns.

“That’s why we recruited Rakim to Maryland,” Locksley said. “He believes in himself, he believes in his ability and he did his part to lift our team today by making big-time plays early.”

But he wasn’t the only Terps’ receiver to make an impact. Tagovailoa — who finished with 282 passing yards and three scores — used his numerous weapons in the first half to keep Penn State (0-3) guessing. Dontay Demus Jr. snagged four passes in the first half and caught a touchdown of his own, a 34-yard snag downfield after a Nittany Lions’ defensive mixup.

Meanwhile, running back Jake Funk continued his form in the backfield. The Terps relied on the Damascus native early and often, as he carried the ball 10 times in the first half. And he rewarded their faith with a 38-yard run that extended Maryland’s lead to three scores early in the second quarter.

“The big plays, sometimes it just happens to us,” Tagovailoa said. “If we just continue to focus on not get[ting] bored with the basics, the big plays will just come.”

On the other side of the ball, the Terps’ front seven kept Nittany Lions quarterback Sean Clifford — who accounted for 452 all-purpose yards and four total touchdowns last year against Maryland — off-balance all afternoon. He rarely had time to get set in the pocket and often missed wildly on his throws downfield, ending the contest 27-for-57.

His lack of rhythm in the first half slowed Penn State to a near-halt, and the Terps led 28-7 at the break.

And Maryland continued to fluster Clifford in the second half, forcing him to fumble on the opening drive of the period, the Terps’ first takeaway of the year. Chance Campbell scooped up the loose ball and returned it to the end zone to expand Maryland’s lead to 35-7.

It was a radical departure from the past two weeks, in which the Terps looked lost on defense. They had allowed 43.5 points per game entering the contest while only registering one sack and forcing no turnovers.

“It was just an emphasis all week … When we all play together and play fast and physical, we’ll be a very good defense,” safety Nick Cross said. “It was just a fun time out there.”

The Nittany Lions broke their scoreless drought with two touchdowns deep in the fourth quarter, but it was far too late for a team looking for their first win of the year.

Much of that was thanks to Jarrett, the freshman often a flash darting through the bright blue Pennsylvania afternoon. And when the clock struck zero, he had one more reason to dance, as the Terps left University Park with a win for the first time in six years.