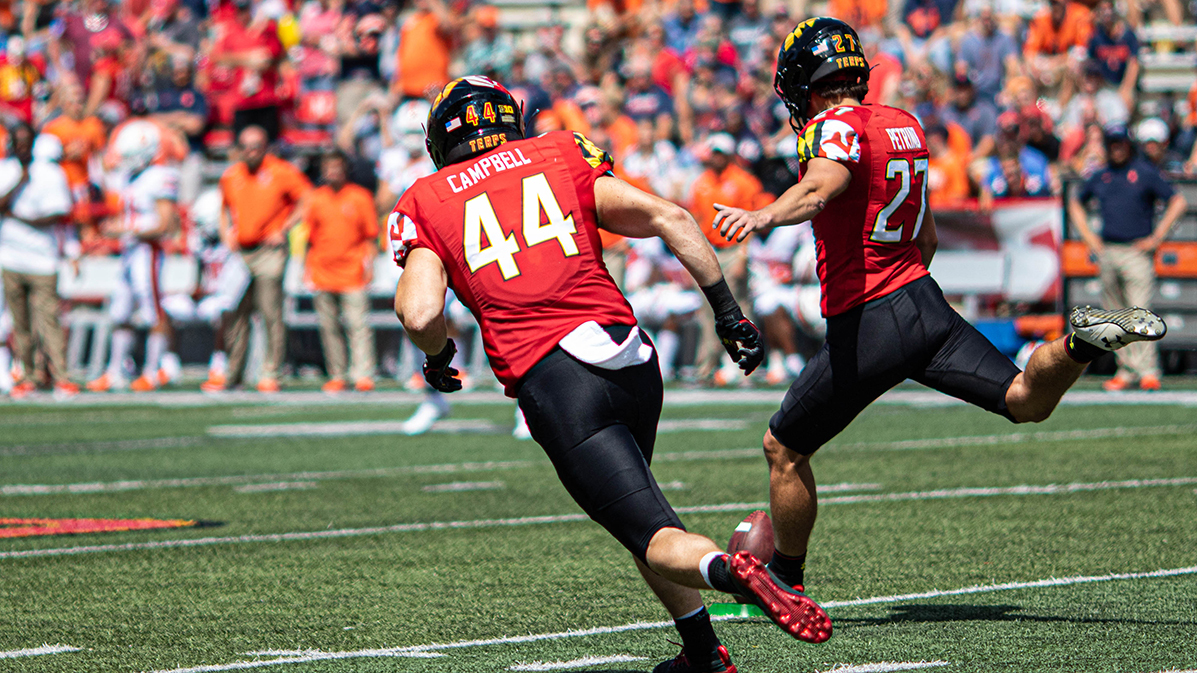 Joseph Petrino was nervous, but he couldn’t show it. The Maryland kicker trotted onto the field halfway through the fourth quarter in College Park, his team trailing Minnesota by 17, and lined up for a 51-yard field goal try.

He had missed from that same distance earlier in the contest, clanging the ball off the left upright, and wanted to avenge his error with the stakes heightened. So he settled in, took a breath and let his leg fly. And when Petrino looked up, he immediately began running around in celebration. He had nailed it.

The kick was the longest of the junior’s college career, a turning point in the game — and for Petrino. He struggled mightily in 2019 and was sometimes a liability when he was on the field.

But he battled over the offseason, and his coach never lost faith in him.

“There was not one hesitation in putting him out there, because we’ve seen him do it in practice,” coach Mike Locksley said. “I think that … hopefully will help continue to build his confidence.”

But Petrino had to endure a disastrous sophomore campaign to get to this point. In 2019, he only made two of his five attempted kicks after making the first 11 of his college career as a freshman in 2018.

Some of the struggles came from Maryland’s lackluster offense not putting Petrino in a position to succeed. Too often last year, the Terps failed to march into field goal range, leaving the Richmond Hill, Georgia, native on the sideline. And when they got down the field, they were usually losing and couldn’t afford to kick on fourth downs.

Injuries also played a role. Petrino said he hurt his left groin in the third game of last season against Temple, which hampered his kicking ability — and his mentality.

“That not only hurt my actual performance ability, but my confidence as well,” Petrino said. “Because I didn’t know if I was going to go out there, and if my groin was going to start hurting at any point in time.”

So Petrino began to train over the offseason. The junior worked with the team’s senior analyst, Ron Zook, on his consistency and the height on his drives, with Zook helping him to not pick his head up during his kicking motion. Petrino also focused on maintaining a neutral mindset and not letting the stage consume him.

In this young season, those changes have already been evident to his teammates.

“We just see his work ethic every day … and he hits some amazing kicks,” safety Jordan Mosley said. “Everybody has faith in him.”

And Petrino is already seeing that work pay dividends. He’s made two of his three attempted field goals in Maryland’s first two games this season while drilling every extra point.

His growth and progress will be key in close contests for his squad going forward, starting Saturday against Penn State. While the Nittany Lions thrashed the Terps in their last three meetings, Maryland is hopeful it can carry some of the momentum from last week’s overtime win into the contest against winless Penn State.

And if the game comes down to the kickers, Petrino now has the confidence to come through.

“Just knowing that [Locksley] as well as the players have the confidence in me now, it means the world to me,” he said. “I feel like I can go out there, and they’ll have my back either way.”