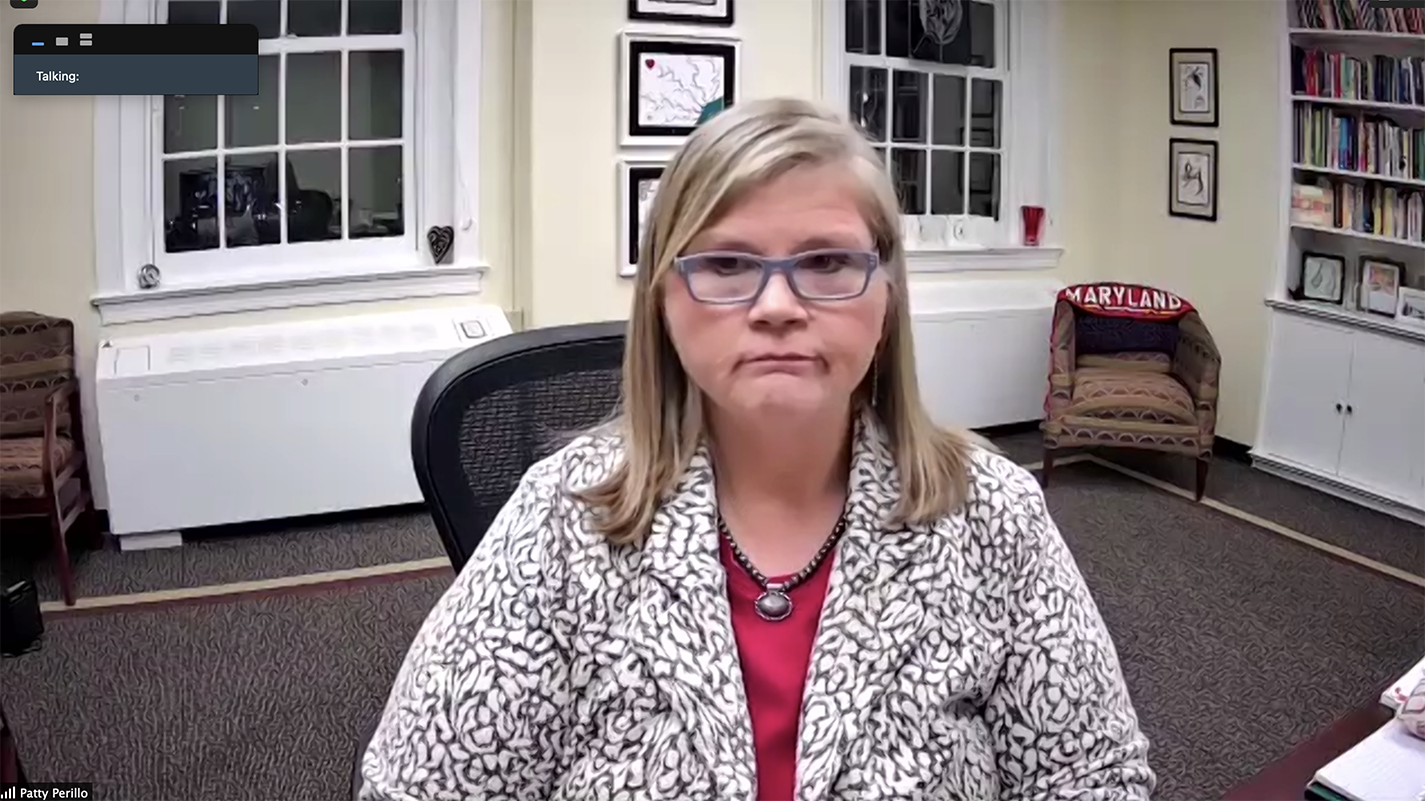 Patty Perillo, student affairs vice president at the University of Maryland, sat down with student leaders and administrators in a virtual town hall Thursday to discuss mental health and the university’s COVID-19 response, but the tide turned after she mistakenly called on a student who isn’t a student leader.

“Tyla?” Perillo asked, after a student leader finished answering a question about what is bringing them hope during this semester.

“Do you want to respond?” Perillo continued, waiting for a response from the empty Zoom window with Tyla’s name. “Hi? Hello?”

When the camera flashed on, Jackson Devadas appeared, sitting next to Tyla Holoman. They’re not student leaders, Devadas said. They came because they wanted answers. And so far, it didn’t feel like they were getting any.

“It’s a little hard to find hope right now,” said Devadas, a senior neurobiology and physiology major. “We asked some questions in the chat, and I know other people who have, and we didn’t feel like they got answered.”

Devadas wasn’t the only student whose questions stretched beyond the breadth of the initially heavily moderated event. Their sentiments opened the floor to other students, who spoke up about injustices they’ve encountered at the university, because of race, gender and ability.

The university isn’t listening, students said. And it’s not acting either, others added.

The town hall comes days after Provost Mary Ann Rankin announced the university would not be implementing pass/fail grading this semester, after more than 7,000 students signed a petition pushing for the grading option due to COVID-19. Instead, the university extended the deadline to withdraw a course with a W, which left students dismayed and prompted Student Government Association leaders to pass legislation calling for the school to reconsider.

“It’s just a little disheartening to see this university yet again … ignore our concerns and reject them,” Devadas continued.

Interjecting, Perillo said she wanted to hear Devadas’ concerns, opening the floor up to anyone whose questions went unanswered during the town hall.

Devadas asked Perillo to elaborate more on the thought process behind the university’s decision to extend the course withdrawal deadline in lieu of a pass/fail option, adding that several student leaders on the call, such as SGA president Dan Alpert, have pushed the university to reconsider its decision.

“That was kind of given the cold shoulder in this meeting,” Devadas said. “And that’s putting a lot of students at a disadvantage.”

Perillo explained that the decision to extend the deadline to withdraw from a course and forgo the pass/fail system came from the provost and the deans and that all she could do in her position was advocate on behalf of the students she spoke to. She stayed on the call for another hour, until the discussion came to an end.

“We can continue to have that conversation,” she said. “But there’s no one on this call who has the responsibility to change that decision.”

On top of questions about pass/fail, Perillo also heard from students struggling to find support within the university in relation to their identities. Alysa Conway, a senior government and politics and public policy major, spoke about her experiences as a Black woman who is neurodivergent. She urged the administration to provide students, especially those with disabilities, more support during such a trying time.

“It needs to be acknowledged that students with disabilities need to have that support, and words aren’t necessarily going to really cut it,” Conway said. “It’s not just like a mere complaint. It is something that is being very trivializing towards our progress as students and our ability to function.”

Conway, who also serves as the academic affairs director for the SGA, is a staunch advocate for pass/fail grading, pushing for the passing of an SGA resolution urging the administration to reconsider its decision about pass/fail.

The administration’s justification for not implementing pass/fail “didn’t make any sense,” said Jon Romano, president of the Interfraternity Council.

“We’re adults. We can decide, I think ourselves, whether we want to put our academic degree at risk,” the senior government and politics major said. “If I don’t get into a good graduate school because I chose pass/fail that’s on me. That’s not on the University of Maryland. That’s on me.”

Alpert echoed Romano’s thoughts, adding that the provost should hold a town hall instead and directly speak to students about their concerns.

“The provost needs to hear these directly from students and also truthfully needs to not confront but talk to students herself,” he said. ”It’s important the provost hears student concerns straight from the source.”

Kayla Foster, a senior public health science major, said the most productive part of the town hall was the second half, where students could unmute themselves and voice their concerns. It was a stark contrast from the first half, which she called a “pat on the back session.”

“There is a ton of work going into supporting students during this time, but I think hearing these stories … is really a lot more productive for me as a student that tries to support other students,” Foster said.