Past ‘Jeopardy!’ contestants from UMD reflect on Alex Trebek’s legacy 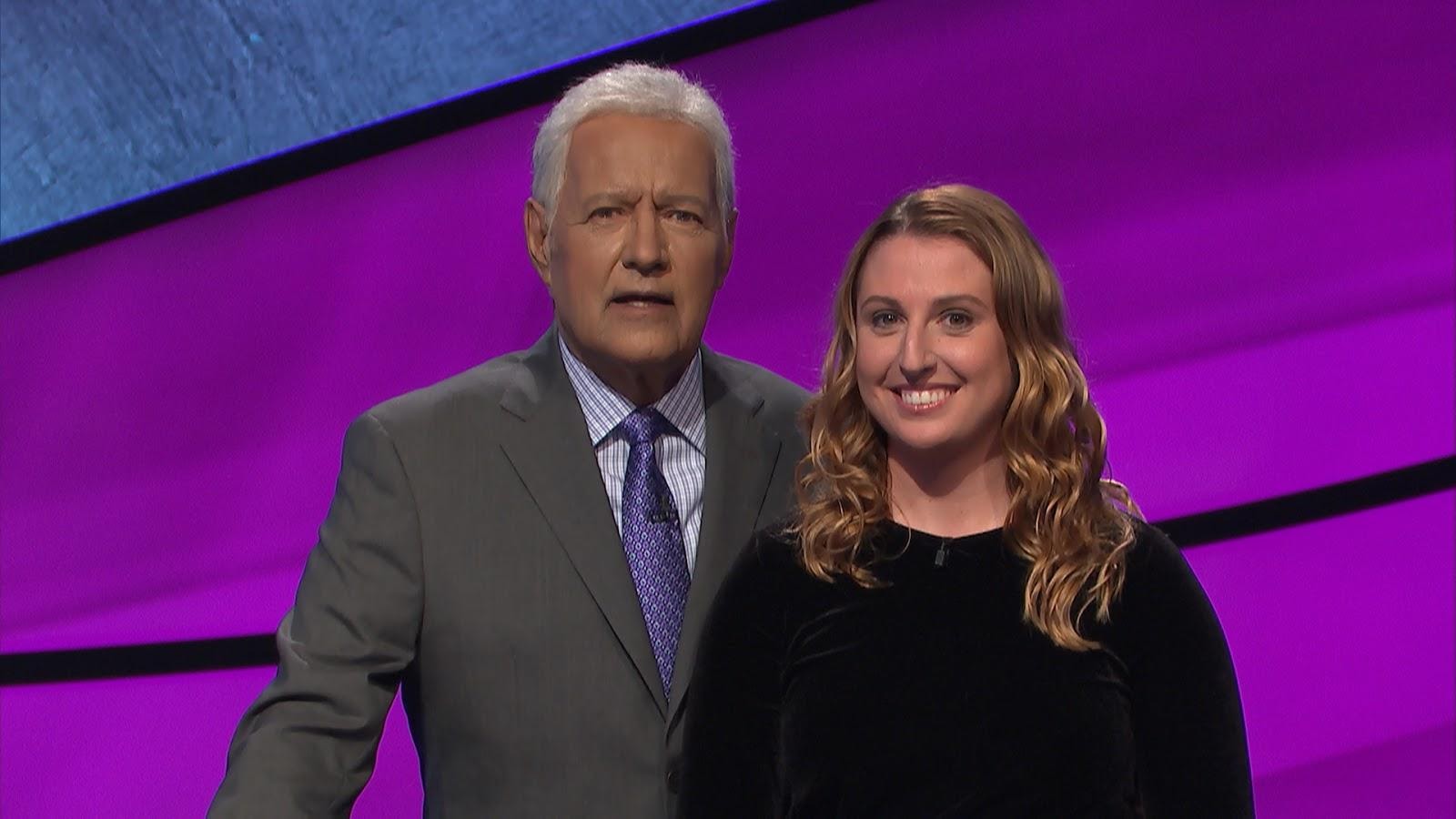 Andrea Dragan only had a few minutes to speak with Alex Trebek in her first episode as a contestant on Jeopardy! They talked about rocket ships.

“You got to see the launch of a SpaceX rocket,” Trebek said. “Where did this take place? Here in Southern California?”

Trebek asked her if the rocket was big. Yes, she said, it was.

“Very noisy, but it’s so interesting, how much you see and then you hear and feel,” Dragan said. “It was really an incredible experience.”

“Good for you,” Trebek said.

And that was it. During the brief, roughly 25-minute run time of a typical Jeopardy! episode, contestants would have just a fleeting moment to talk to Alex Trebek, the long-time host of the show. But those few seconds with a childhood hero did not disappoint.

“I definitely remember him walking out and being like ‘Wow, that’s Alex Trebek,’” Dragan said. “And he’s so close to you … it really was such a highlight.”

Dragan is a fourth-year public health graduate student at the University of Maryland. She taped her shows in January 2020; they aired March 18 and 19, just as the country started to go into lockdown. Dragan finished her second show in second place, with $2,000.

This brief conversation with Trebek would be one of only two interviews Dragan had on the episodes in which she competed. It was a lifelong dream for Dragan to compete on the show, stand on that hallowed stage with fellow brainiacs and interact with the gently wry and ever-composed Trebek.

Trebek passed away this week at the age of 80 from pancreatic cancer. He had long been open with the public about his diagnosis, but even so, news of his passing came as a shock to the Jeopardy! community. After 36 years hosting the show, Trebek had become synonymous with its presence — a fixture of American television and a paragon of knowledge.

“There’s no one like Alex Trebek, and there never will be again,” Dragan said. “Anytime someone with that much presence and importance passes away, there’s just this kind of sweeping feeling of uncertainty that accompanies it. And I think that he just seemed immortal and larger than life … he was steadfast, he was reliable, knowledgeable.”

Dragan, who attends graduate school part time and works at this university, grew up watching the show with her family.

“In my household growing up, it was dinner and then Jeopardy!” Dragan said.

Dragan said the show was a bonding activity for her and her father — it united them over a love of learning.

But the joy of the show was just as much about its host, as it was the trivia. Trebek was a rare gentleman of television. He did not invite excess attention and rather remained reserved, polished, even brusque. I’ve always thought Trebek belongs to that older class of manliness, which prizes subtlety, confidence and strength of character over gaudiness or schadenfreude. Trebek was witty, to be sure — he possessed wit in troves — but he was never a ham.

Can the show go on without Trebek?

“Alex Trebek is Jeopardy! And Jeopardy! is Alex Trebek,” said Dragan. “But I think there will be a form of Jeopardy! that goes on without him … I think that he would be sad at the thought that Jeopardy! died with him.”

Steven Reich, a fellow Jeopardy! alum, wasn’t sure what the future of the show would look like without its iconic host.

“I don’t think anyone would question that … the identity of Jeopardy! is inextricably linked with [Trebek], and his personality and his presence,” Reich said.

Reich is a seventh-year mathematics doctoral student. He competed on Jeopardy! in  August 2019, and the episode aired the following October.

Reich said meeting Trebek was “surreal.” In the brief interview he had with Trebek, they talked about Reich’s family nickname: Mookie.

His father wanted to name him after the legendary Mets player, Mookie Wilson, Reich said. But his mother had vetoed the decision. Even so, the nickname made it onto national television.

This family tradition was just one of a few interesting facts he provided to the Jeopardy! team in response to a questionnaire they sent to all contestants, Reich said. The answers Reich sent in, along with those of other contestants, would provide fodder for those brief between-game interviews with Trebek.

Before each taping, Trebek read over the answers picked by staff. That’s how “Mookie” appeared on the show, and that’s how Dragan ended up talking about the rocket launch in Florida.

On taping days, Trebek started his workday at 7:30 a.m. He taped five shows for the entire week and answered audience questions during commercial breaks. Despite his declining health, Trebek continued to complete this rigorous schedule. His affection for the show, Dragan said, was apparent.

“He just loved being there,” Dragan said. “And knowing that there’s only a certain amount of episodes left is just heartbreaking.”

Sometimes, however, Trebek was visibly tired during his later tapings. Though he exhibited the same droll charisma, he also willingly dropped the camera-ready facade. Dragan recalled one moment during the day she spent on the Jeopardy! set, when Trebek made a comment about wanting to go home and sleep. He was still wearing a mic — he made no attempt to disguise his exhaustion from the audience.

“I think that honesty about what he was going through really just endeared the entire country to him,” Dragan said. “He really did put himself out there and shared his journey with cancer with everyone. And I can’t imagine that was an easy thing to do.”

Despite his diagnosis, Trebek continued to host the show till the very end — just 10 days before he passed away. For Trebek, it was more than an occupation, it was something he valued deeply. It was, as he said confidently in a Good Morning America interview in July, “a good job.”

The last episode with Trebek as host will air Christmas Day.

“I feel grateful that I got to do it when I did,” Reich said.

Now, for Reich, his fellow contestants, and for those Trebek fans who played the game from home, there are always reruns. And luckily, there are many — about 8,000.

And for those that did meet Trebek, there are memories.

“Meeting him was even greater than I thought it could ever be,” Dragan said. “I think that while his legacy will always be associated with Jeopardy!, that those of us who got to meet him will always associate him with such kindness.”