You broke your laptop, and the whole world is online. What now? 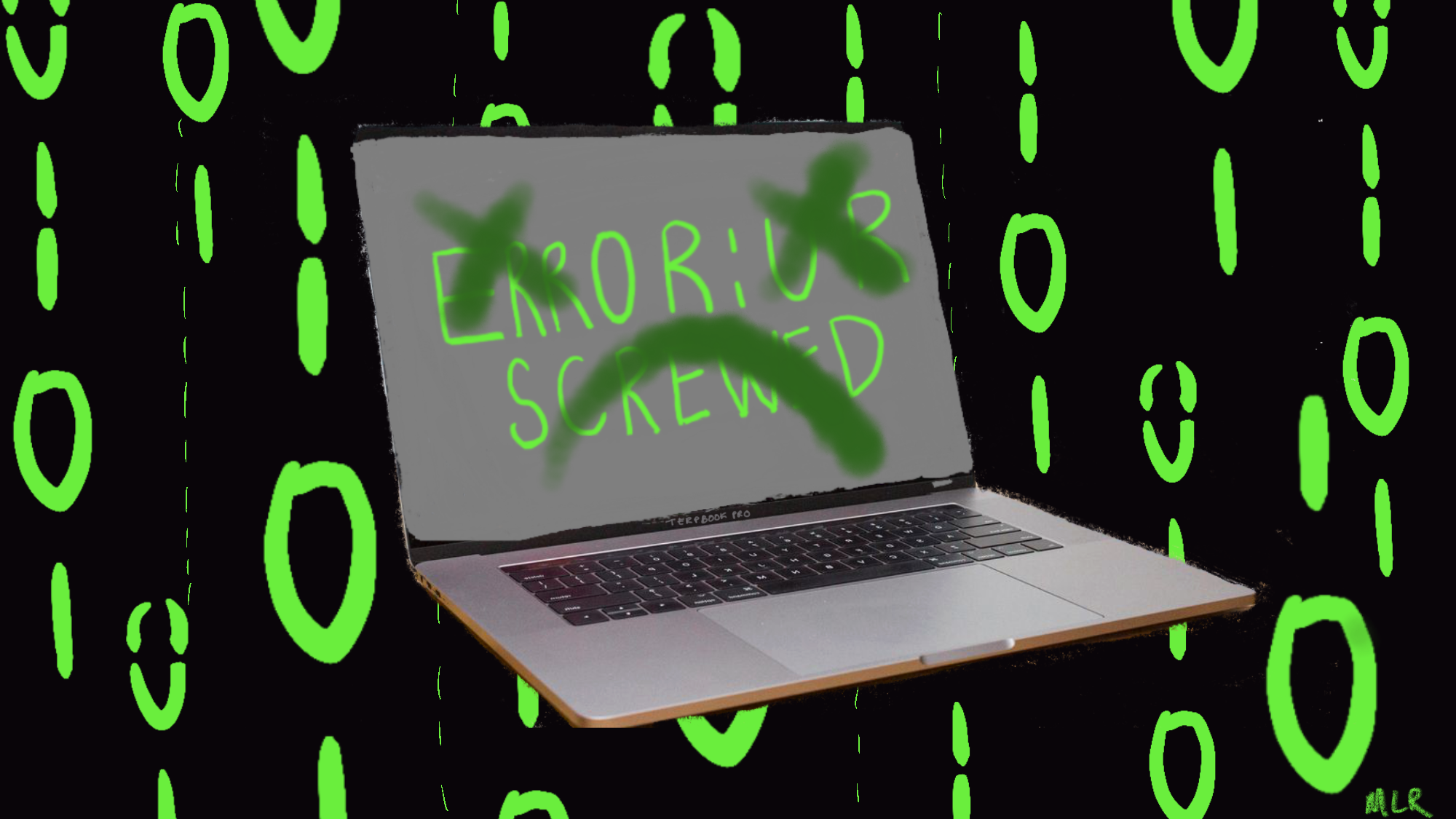 A broken laptop is especially worse in a semester that is largely online. (Illustration by Manuela López Restrepo)

One summer morning, Emmanuel Papastefanou woke up to a crack in his laptop screen. It spread internally from the bottom of the screen, spidering upward until it reached the top of the monitor, making it impossible for him to work. Papastefanou said he hadn’t dropped the laptop — the crack materialized on its own overnight.

By the first week of classes this fall, the laptop was unusable.

Papastefanou, a junior environmental science and policy major, said he’s had the same 2017 MacBook Pro since the summer before his freshman year. That same year, he witnessed a similar crack grow out of his monitor and took the laptop to be serviced. He paid for the service out of warranty.

Now it was happening again — only this time, with a global pandemic looming in the background. This summer, without a laptop to use to attend online classes or complete assignments, Papastefanou remembered an email he’d received months earlier from this university alerting students to resources that could provide technology during the pandemic.

He couldn’t find the email again, so he set about searching for resources himself. After around a week of Googling and phone calls, he ended up at the UMD Student Crisis Fund. He applied for financial assistance, entering “$0” as the dollar amount — instead, in the description section of the application, he requested a loaner laptop.

The UMD Student Crisis Fund has partnered with the Division of Information Technology this semester in order to accommodate students’ increased need for technology during the pandemic, according to Sarah Williamson, a coordinator at the vice president for student affairs’s office.

Williamson said the DIT noted a marked spike in the amount of requested laptops and Wi-Fi hotspots, so they wanted to be sure they were reaching students who “had no other option.” There have been 216 hardware loans so far this semester, compared to 149 loans in the same period last fall, according to information provided by the DIT through a university spokesperson.

In a semester when almost every meeting, class and assignment takes place online, it can be just short of devastating to break your laptop. I should know — I wrote the first draft of this story from a borrowed Dell Latitude, while my own computer idled at a pallid six percent on my desk. It had been a bit over a week since it stopped charging consistently; I watched the battery tick down as it sucked up power from the wall.

I requested my loaner laptop through McKeldin Library. This semester, they’re giving laptops out for two-week periods through curbside pickup. The website says students should request equipment at least one week in advance — luckily, I was able to pick mine up three days early.

But my laptop issues pale in comparison to those of Quintin Harry, a junior philosophy, politics and economics major. Harry is a member of the Student Government Association, a student fees coordinator at the Office of the President and a member of the Residence Hall Association executive board, among other additional commitments. It’s a lot to juggle — and on top of all of it, their laptop recently broke.

[Why I’m obsessed with skateboarding, and why you should be too]

Harry has ADHD. They use accommodations through the Accessibility and Disability Service Office, specifically in the form of an audio note-taking app, Sonocent. The ADS office pays for Harry’s use of the app, which helps them organize their notes.

But a broken laptop means Harry no longer has access to the app — and thanks to an ADS requirement limiting downloads of a paid version of Sonocent to only one device, Harry can’t get access on a loaner laptop, either.

Absent a laptop, Harry has been using a free version of Sonocent on their phone and a friend’s iPad. It’s not ideal, they said, and it has made keeping up with school work stressful.

“There was a file … I had to pull up for my internship that just would not load on my iPad,” Harry said. “I had to borrow someone else’s computer and convert the files and then send them back.”

Where was Harry’s laptop during all this?

As it turns out, sitting in a uBreakiFix in College Park. On Sept. 21, Harry’s laptop broke after some rough jostling during their move-in to Courtyards. Harry said a bag hit the computer, cracking its screen. Over the course of a week, the computer stopped connecting to the internet. Harry said they took the laptop in for repairs around Sept. 25. They finally picked up the repaired laptop on Oct. 28 — a few short hours before our interview. It had been sitting in the shop for more than a month.

Over the course of that period, the technicians at uBreakiFix had ordered the wrong components to replace the laptop’s screen, called Harry to report their mistake and then restarted repairs on the computer, which they handed back with a warning that the touchscreen feature might no longer work, Harry said. The technicians hadn’t provided an initial estimate, but the wait seemed excessive, Harry said. The cost of repairs, Harry said, totaled $190.

“If you have any kind of problems, and if you’re in a tight financial situation, like I am, then you’re just completely frozen at this time,” said Harry.

Some repairs require uBreakiFix technicians to special order parts, which can affect how long the process takes, according to a statement from Morgan Langdon, general manager at uBreakiFix College Park.

The pandemic and the election have caused more frequent shipping delays, according to the statement, but the store is accommodating increased demand for repairs by regularly stocking common device parts.

“We are committed to serving those who attend and work at local institutions,” the statement read. “We know students and educators are more reliant on tech than ever right now.”

As for Papastefanou, his Student Crisis Fund request went through. He was able to pick up a loaner from the Edward St. John Learning and Teaching Center. Strangely, he said, when he opened the laptop, it was dirty. The screen, he said, was “crusty,” and had “crumbs everywhere.” Then, on Sept. 16, he received another loaner laptop in the mail. Papastefanou said he hasn’t used the second laptop and doesn’t know why he got it.

“Different individuals from our team mistakenly sent laptops to rapidly meet a student’s needs without updating our records accordingly,” according to information provided by the DIT. The department later identified the mistake and contacted the student to get the extra hardware returned, according to the statement.

Papastefanou’s old MacBook Pro was returned to him from Terrapin Tech on Oct. 29, the day after we spoke. He said the technicians had called to tell him they’d ordered a wrong part, which presumably slowed down the repair process. Like Harry’s, Papastefanou’s laptop had been at the service center for more than a month.

Wait times can be extended due to missing information necessary to make the repairs, according to the DIT information, and repair times typically take between nine and 14 days.

“The turnaround time … it doesn’t make you feel safe at all,” Papastefanou said. “And with everything online … they don’t even want to talk to you on the phone most of the time.”

“We do our best to manage the customer’s expectations and minimize the frustrations when we encounter cases that take longer than expected,” wrote the DIT.

The process of replacing a laptop during a pandemic hinges on Kafkaesque. Customer service is bad enough — then add on the insecurity of not knowing if the loaner laptop you’ll receive will have the features you need, or if you have the money to pay for any out-of-warranty repairs or if you’ll be able to complete your assignments in time. A mysterious laptop in the mail and a month long wait at the tech shop would make anyone feel bewildered.

In the meantime, my own laptop is finally working. I was lucky enough to be under warranty. At the end of October, two repairmen rode the elevator up to my apartment on two separate days and took apart the laptop at my counter. They both removed the bottom panel of the computer, exposing the organized mess of tiny circuits that have ruled my last eight months with an authoritarian grip. A pinkie-sized bundle of worn silver wires lay severed on the table; this mechanical silk worm had prevented my computer from charging.

Everything I wrote and downloaded on the loaner will be deleted after I shut down the laptop. Library staff will wipe my files and any digital or microbial trace of my presence.

In my mind, I picture a group of men in black suits, solemnly handing the laptop down a long table in a semi-darkened room. Each man deletes a single file from the task manager. No one speaks. At the end of the line, a man in a hazmat suit takes the laptop in his gloved hands and dunks it in a pool of hydrogen peroxide. It fizzes. He holds his free hand up, bright yellow palm facing outward, making a mental count. He removes the laptop from the solution. It will survive; the virus will not.

Meanwhile, in an IT shop somewhere, a laptop idles. A crack climbs up the screen.