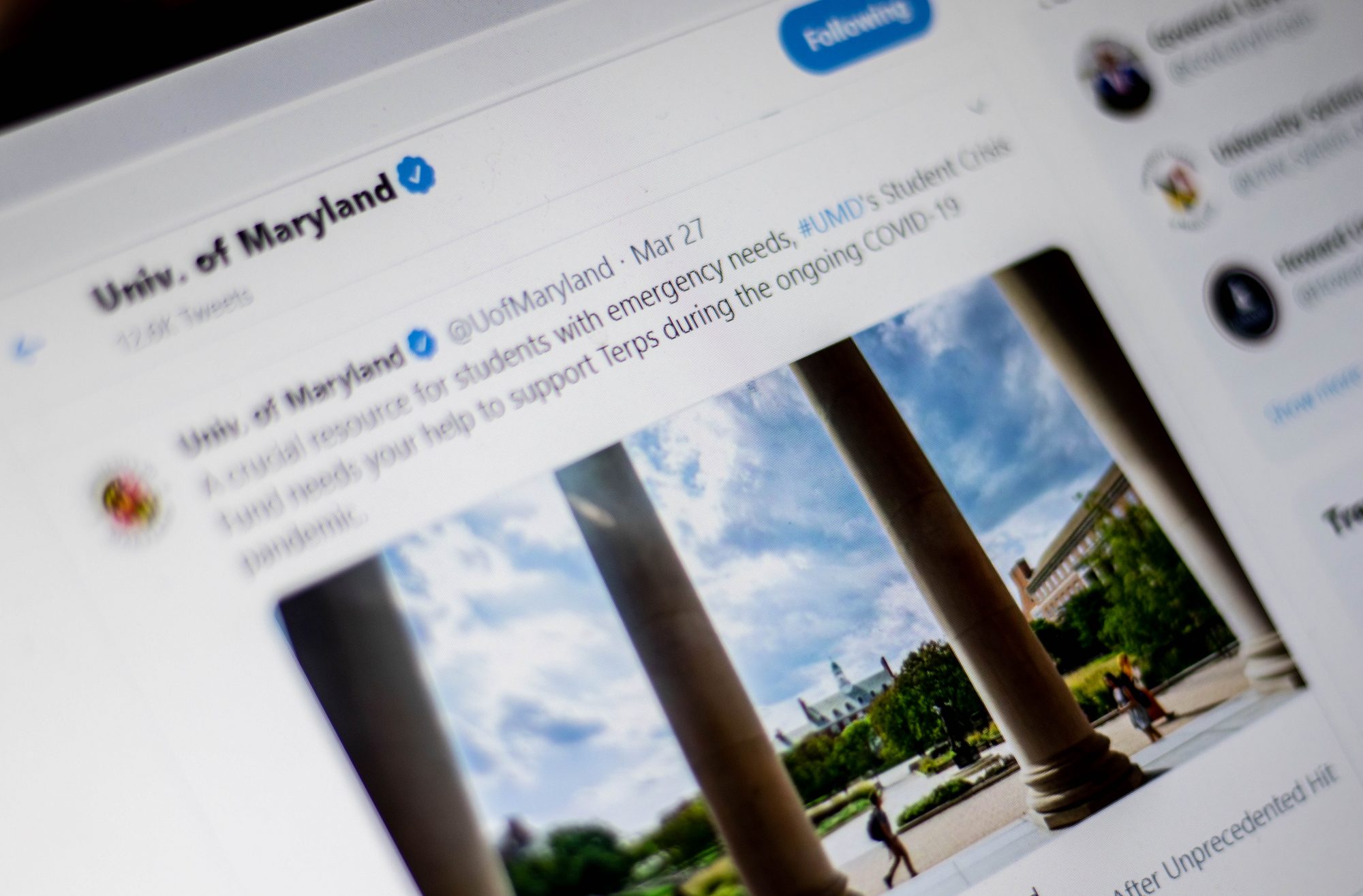 Due to the coronavirus pandemic, many students are requesting money from the University of Maryland's crisis fund. (Julia Nikhinson/The Diamondback)

By Emily Williams
For The Diamondback

With the Clarice Smith Performing Arts Center among the University of Maryland facilities closed due to the coronavirus pandemic, Emily Shallbetter worried about her current financial situation.

“I work in customer service,” the senior voice performance major said, “In order for me to work, there has to be events. So when there are no events, I can’t work.”

Shallbetter said she was stressed about paying for bills and groceries, and even more so about her post-graduation job prospects. When her work group chat informed her about the university’s student crisis fund, she sent in an application and was offered $500 from the organization.

“It’s particularly helpful that it’s available now because unemployment is impossible to apply for currently, because so many people are trying,” Shallbetter said.

The university’s student crisis fund accepts applications from any student who needs financial support. The only limitation is that students cannot apply twice, but the fund is now allowing students who applied in the past to reapply because of the pandemic.

[Read more: As coronavirus pandemic continues, some UMD employees are out of work]

The student crisis fund received its first coronavirus-related application March 11, said Sarah Williamson, a coordinator in the office of the vice president for student affairs. Since then, it has awarded about $379,050 to over 800 students financially impacted by the coronavirus, university spokesperson Hafsa Siddiqi wrote in an email.

“Especially in light of what’s happening, a lot of students have on-campus jobs, and the university had to move online, so [the fund] is relieving some of that revenue source they used to have,” Williamson said.

The Division of Student Affairs established the fund in 2001 to help students remain academically successful while they face financial emergencies. It relies mostly on private donations.

The application for financial assistance is a Google Docs form that asks for basic information and a reason for needing the money. The average award for students is $500.

Matt McVeigh, a junior economics and music major, noted how easy the process was after receiving a response from the fund three hours after submitting an application. He was awarded $500.

“As long as it was a valid reason, then it would go through,” he said.

Sophomore Erin Rogers was also awarded $500, after only requesting $300. Before the coronavirus pandemic caused the university to close, Rogers had never heard of the fund before.

“It was nice and comforting right now, especially because a lot of things are up in the air,” she said. “I don’t know if I’m going to have my summer job.”

Rogers, an environmental science and technology major, worried that the process was too simple, and said the extra money she had been awarded could have gone to a student who needed it more.

“There was no way of them actually checking that I genuinely needed the money,” Rogers said.

Because of the influx of applications, Student Affairs reached out to the community asking for more donations. The fund, on average, received two to five requests per week, but now receives over 70 applications daily, Siddiqi wrote. The fund has raised about $162,000 from community members since the drive began March 25.

“I guess I had kind of supposed that there was money available for students in emergency situations, but I didn’t realize that there was so much available to so many people and that it would be so easy to apply,” Shallbetter said.