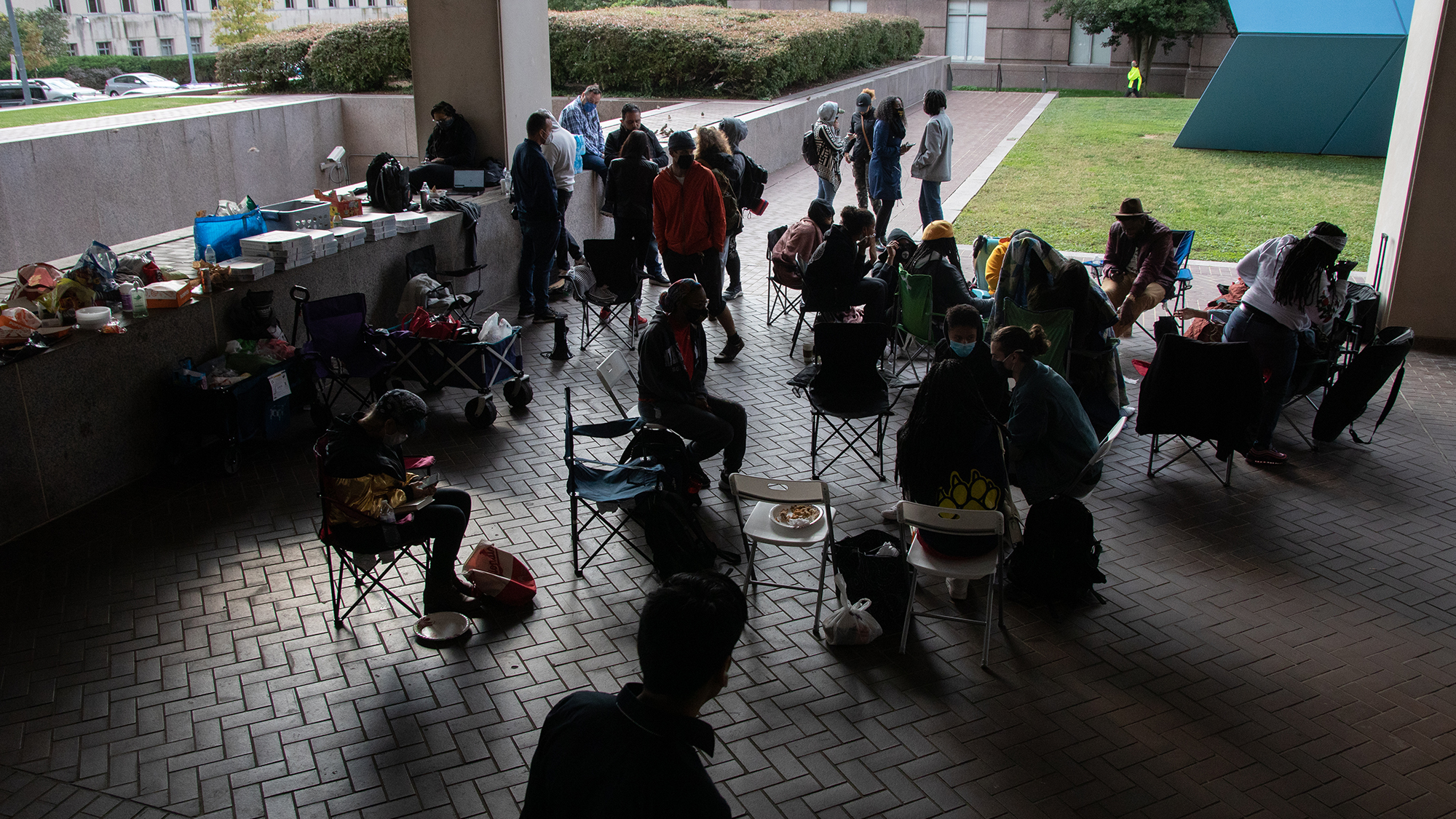 People gather at the intersection of C St. NW and 3rd St. NW, outside of the H. Carl Moultrie Courthouse, in Washington, D.C. on Oct. 16, 2020 for a jail support. Black Terps Matter organizer and University of Maryland student Saba Tshibaka was arrested by U.S. Capitol Police during a protest on Oct. 15. (Julia Nikhinson/The Diamondback)

There’s a video on Twitter of Saba Tshibaka in handcuffs. She’s standing in the street, on a corner near the U.S. Supreme Court, as two U.S. Capitol Police officers restrain her arms behind her back and another one pats her down.

“Apparently they’re arresting me because I’m resisting arrest,” she calls out. “This is ridiculous.”

Tshibaka, a senior philosophy, politics and economics University of Maryland student, had been participating in a sit-in with the Live Movement, a coalition of students from historically Black colleges and universities, to protest the confirmation of Judge Amy Coney Barrett to the Supreme Court. After being detained for resisting arrest — a charge she denies — she says she spent the following 27 hours in jail.

However, Tshibaka says she doesn’t regret protesting. She says she had been inspired by Anita Hill, a lawyer who faced ruthless questioning by the Senate Judiciary Committee when she brought forward sexual harassment allegations against Judge Clarence Thomas during his confirmation hearing to the Supreme Court.

“Regardless of whatever you think the outcome may be, if you feel the need to speak out about an injustice that’s happening, you need to do it,” said Tshibaka, an organizer with Black Terps Matter, a coalition fighting for racial justice at this university. “As a person that tries to practice what I preach, I’m going to speak out. I’m going to do something. I was willingly arrested.”

Tshibaka is one of many students at this university for whom last week’s confirmation of Barrett to the high court brought about strong feelings. While some were concerned about her position on issues such as LGBTQ+ rights, women’s rights and climate change, others were dismayed by the intense politicization of the confirmation process.

After being nominated to the Supreme Court eight days after the death of Justice Ruth Bader Ginsburg on Sept. 26, Barrett — who some have begun calling “ACB” to harken back to the “Notorious RBG’s” nickname — was confirmed Oct. 26 by a vote supported by all but one Republican senator.  In contrast, the confirmation process of the most recently added justice before Barrett, Brett Kavanaugh, took almost three months.

“I really didn’t think the process was going to go that quickly, just because it’s never gone that quickly,” said Molly Dugdale, a junior criminology and criminal justice and psychology major.

Preventing Sexual Assault, a student group at this university, has organized and taken part in a series of events in a show of its opposition to the Barrett confirmation. A group of its members attended the Women’s March in Washington, D.C., in large part because they wanted to flag concerns about her assumed position against Roe v. Wade, said Lizzie Mafrici, PSA President.

Additionally, PSA conducted a letter-writing campaign to infrequent voters in swing states, as a response “to the hopelessness we were feeling around the confirmation process,”as well as to protest any changes to Title IX, an issue very important to the organization, Mafrici said. Overall, Mafrici fears that Barrett will make changes that will harm Americans in a long-lasting way, she said.

“Just because they’re a woman in high power does not make them a feminist, especially if their policies directly hurt those marginalized and in need of raising up,” Mafrici said. “Amy Coney Barrett is no exception.”

Meanwhile, individual students are working through a variety of reactions to the implications of Barrett’s confirmation.

Kailee Goldberg, a sophomore theatre major, said she had an anxiety attack when she heard Barrett was confirmed. She said she fears Barrett is going to restrict her rights as a woman and as a member of the LGBTQ+ community.

“My suitemate and I just kind of sat together in disbelief for a while,” Goldberg said. “My reaction for sure was just terror. I’m extremely scared and worried.”

Goldberg particularly worries for the long-term impacts that Barrett’s position may hold. “My youngest cousin, she was just born last year. I’m so scared for her future,” she said.

Other students are scared for how Barrett’s confirmation — and the now solidly conservative majority on the Supreme Court — will threaten racial and religious minorities. Becca Carin, a junior Jewish studies major, said that civil rights would be in jeopardy with Barrett on the court. She added that the court’s conservative lean is not representative of the politics of the majority of people in the United States, especially people of color.

“There’s so much at stake and it’s kind of ridiculous that they’re pushing it through just because they want to get more conservative-leaning justices,” Carin said.

Sabina Khan, a freshman government and politics major, said she felt conflicted over Barrett’s nomination; on one hand, she disagrees with Barrett’s policies on a moral level. On the other, she felt like Barrett was qualified for the role and said the process was over-dramatized.

President Donald Trump appointed Barrett to the 7th Circuit of the federal appeals court in 2017, meaning she only served as a federal judge for less than three years before joining the Supreme Court. In contrast, Ginsburg was a federal judge for the U.S. Court of Appeals for the District of Columbia Circuit for over 13 years before joining the Supreme Court.

Anna Bliss, a sophomore criminology and criminal justice major, identifies as pro-choice when it comes to abortion rights, in contrast to Barrett, who has supported the reversal of Roe v. Wade. But Bliss also believes that Supreme Court confirmations should be made based on merit, not political belief.

“She’s an intelligent, hardworking woman who will be a good addition, no matter if we disagree on things,” Bliss said.

If Bliss was against one thing that came with Barrett’s confirmation, it was that it occurred after Senate Republicans refused to schedule hearings for former President Barack Obama’s Supreme Court nominee, Merrick Garland, in 2016. At the time, Senate Republicans had argued that any vacancy in the Supreme Court made during an election year should be filled by the next sitting president.

“The hypocrisy there is kind of unsettling,” she said.

Colby Merrill, a junior aerospace engineering major and member of Black Terps Matter, identified Barrett’s confirmation as a huge problem for themself, as well as for the entire Black Lives Matter movement.

Her confirmation to the high court, they went on to say, only symbolized a failing of the American justice system.

“You can see just from Saba and the Live Movement protesting, that we really do not have a say in this,” Merrill said. “She’s going to make decisions for me. And I’m not okay with her making those decisions, but I don’t have a choice.”