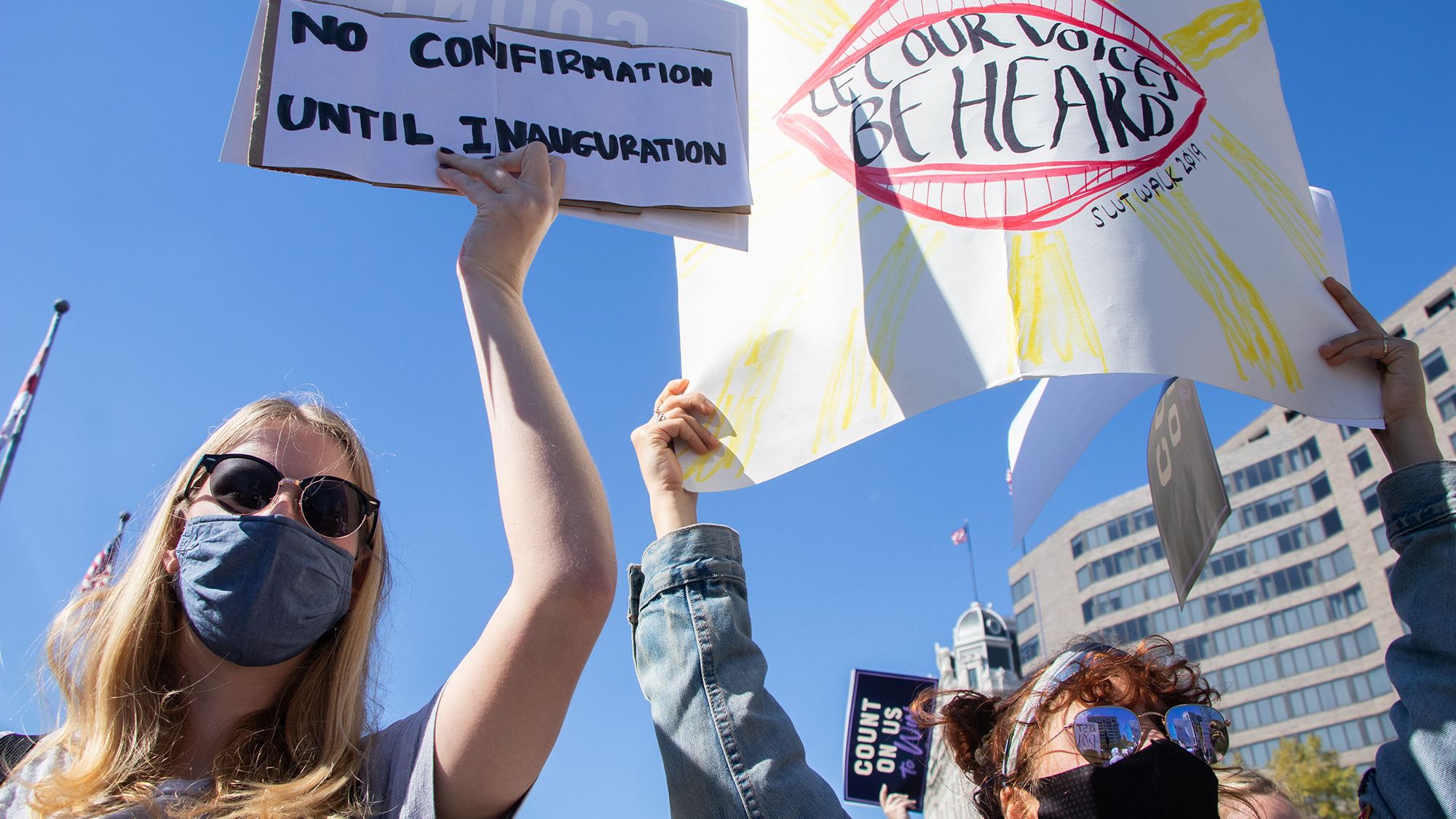 Crowds gathered in Washington, D.C., on Saturday for the latest iteration of the Women’s March, donning face masks and hoisting signs like “Sisters not cis-ters” and “WAP — Whack Ass President.” Protesters marched for reproductive rights, among other issues, with some dressed in feminist costumes like the late Justice Ruth Bader Ginsburg’s judicial robe and the red robes and white bonnets from The Handmaid’s Tale.

The march came in the final months of President Donald Trump’s term, more than three years after his inauguration prompted the original march in 2017. Now, ahead of the Nov. 3 election, organizers sought to remind people of that same passion.

University of Maryland students trekked to Washington, D.C., to show their support for the march’s cause, with some boosting posters that read “No confirmation until inauguration” and “Let our voices be heard.”

Paris Morton, a freshman government and politics major, came to the march with her friend, Sonali Noronha. Morton and Noronha came to show their support for women’s rights ahead of the presidential election and the Supreme Court confirmation vote.

“We just thought it was really necessary to be out here and standing up for people who can’t be here,” Morton said, with a Terrapin Strong mask strapped to her face.

“Especially with everything going on with the election coming up and ACB being confirmed,” added Noronha, a freshman physiology and neurobiology major, referring to Supreme Court nominee Amy Coney Barrett. Barrett’s confirmation is pending votes by the Senate Judiciary Committee, then the full Senate.

The march began with a series of speeches in Freedom Plaza. The area is a block away from the White House and features a direct view of the U.S. Capitol down Pennsylvania Avenue. Nee Nee Taylor, a Black Lives Matter DC organizer, was among the speakers. In one speech, Jasmine Clemons, a patient advocate for Planned Parenthood, spoke about her experience getting an abortion.

“We really need to work on more equality in health care,” said Marina Kissner, a senior kinesiology major, while reacting to Clemons’ story.

Kissner attended the march with Lizzie Mafrici, a senior public policy and women’s studies major and the president of the Preventing Sexual Assault organization at this university. For Mafrici, one of the things that stood out about Saturday’s march was the lack of police intervention, as compared to the response to Black Lives Matter protests.

“It just shows the inequalities in D.C. politics,” Mafrici said.

“I’m from a pretty liberal town myself, so I’ve never seen that big of a group for pro-life and baby posters everywhere,” said Grace McCormick, a junior psychology major.

Attending with her roommate, McCormick said she saw around 10 people she knows from this university. This was the first women’s march she has ever attended.

For Mafrici, political activism is critical, since it demonstrates the issues that matter to voters. And these issues will also play out on campus, she added.