After congressional run, Mckayla Wilkes is fighting to end the school-to-prison pipeline 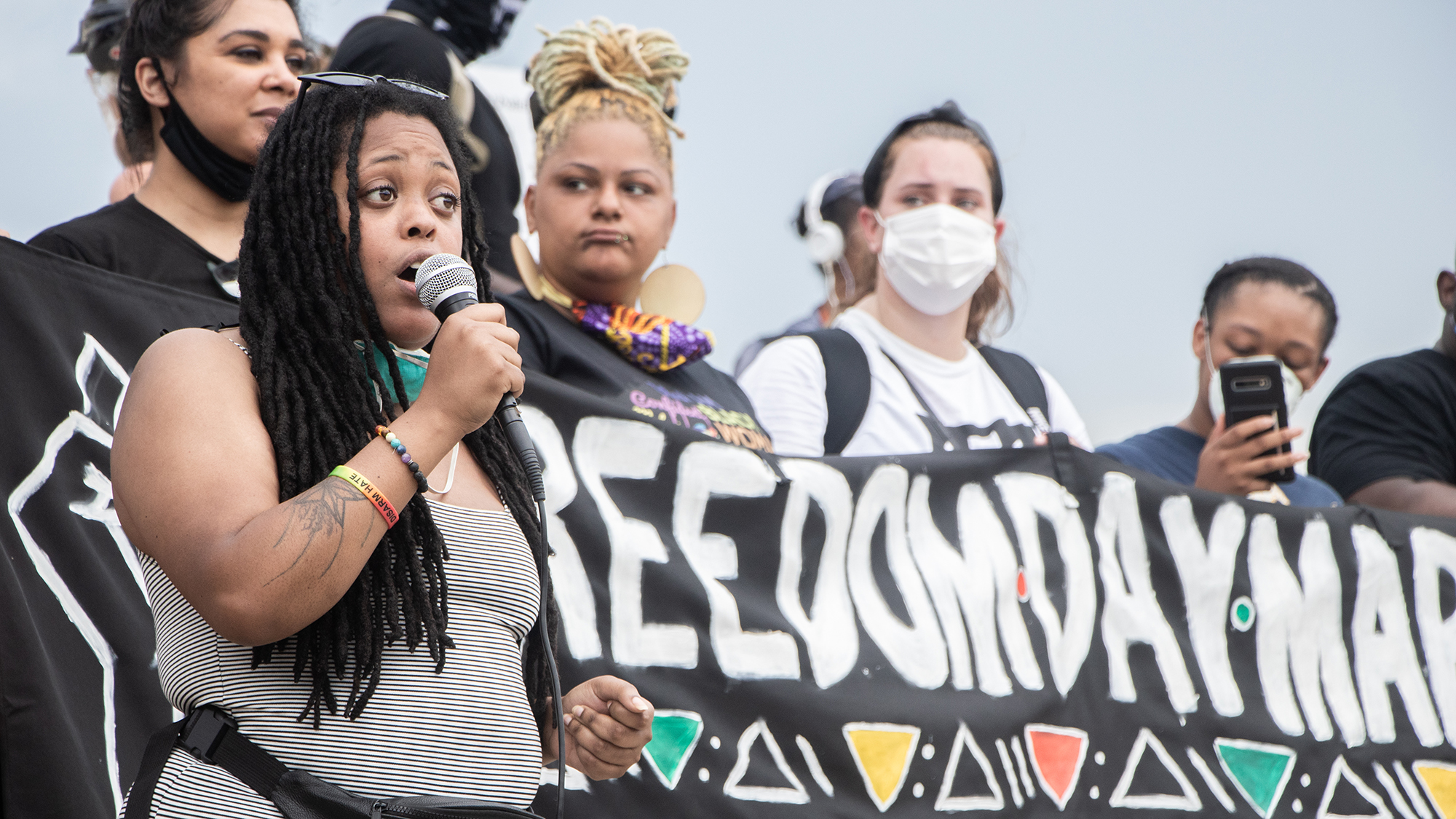 Mckayla Wilkes speaks on the steps of the Lincoln Memorial on June 19, 2020. (Julia Nikhinson/The Diamondback)

Mckayla Wilkes was just a kid when American Airlines Flight 77 crashed into the west side of the Pentagon, killing 125 people. Her aunt, a civilian employee with the Department of the Army, was one of them.

Not knowing how to process her grief, Wilkes said she became rebellious as a teenager, skipping class and running away from home. Looking back, Wilkes said she would have benefited from counseling. Instead, she spent much of her teenage years cycling in and out of juvenile detention facilities.

“Basically, just me being a kid and making mistakes and suffering from mental health, that behavior was criminalized,” Wilkes said.

Wilkes understands intimately how devastating it can be to become ensnared in the criminal justice system as a young person. And today, one congressional run later, she’s fighting to ensure that fewer kids will grow to understand the system the same way she has.

Over the summer, after losing her congressional bid to unseat House Majority Leader Steny Hoyer in Maryland’s 5th District, Wilkes founded a nonprofit organization with the former outreach coordinator of her campaign and a former University of Maryland student. The group seeks to attack the school-to-prison pipeline — a national trend, fueled by harsh school disciplinary policies, wherein kids are funneled from public schools into the juvenile and criminal justice systems.

The organization, called “Schools Not Jails,” advocates for criminal justice reform and ending the pipeline by endorsing local candidates with similar views and meeting with state legislators to push for policy change.

“We’ve seen a lot of energy on this issue and the carceral system more broadly this year,” said co-founder Dash Yeatts-Lonske, who graduated from the university this year. “The key is really just keeping up the momentum and turning that energy into actual policy change.”

A study published over the summer by a researcher from this university and a research firm found that increasing the presence of law enforcement in schools does not make them safer — instead, it increases the likelihood that students will be arrested after violating school rules.

Now, the county school board is in the process of discussing whether to remove school resource officers from all schools. The board tabled the measure for the second time in September, and it will be up for discussion once again in January.

Wilkes is in favor of phasing out school resource officers from local schools, as school boards in Minneapolis and Seattle have recently voted to do. A better alternative to the current officers would be unarmed officers who don’t have arresting authority, she said.

“Kids go to school to learn,” Wilkes said. “Not to be policed.”

Raaheela Ahmed, who is the school board member for District 5, received the latest endorsement from the organization last week. Ahmed was one of the original sponsors on the measure to remove SROs from schools, and two years ago, she led the effort to start an annual event encouraging students to take part in conversations about social injustice.

Seeing other school districts support the Black Lives Matter movement has been encouraging, she said, but she also wishes it had not taken so long.

“People are waking up now in a way they haven’t woken up before,” Ahmed said. “That’s what Schools Not Jails is about — making sure that it’s not just a moment, that this is a movement for something better because our kids don’t deserve anything less than that.”

After the election cycle is over, the organization will focus on legislative action, advocating for policies that would combat the school-to-prison pipeline, reform policing and end mass incarceration, Yeatts-Lonske said.

A bipartisan group of lawmakers from the Maryland House of Delegates voted earlier this month to recommend policing changes in the state, including more mental health screenings for officers. Last Thursday, the group also recommended repealing the Law Enforcement Officers’ Bill of Rights, a controversial measure that lays out the disciplinary process for police.

One aspect of the bill gives officers accused of misconduct a five-day window before they must speak with investigators, and critics say the bill protects officers from being held accountable for their actions.

The organization has been meeting with state legislators with the hopes of implementing criminal justice reform, Wilkes said.