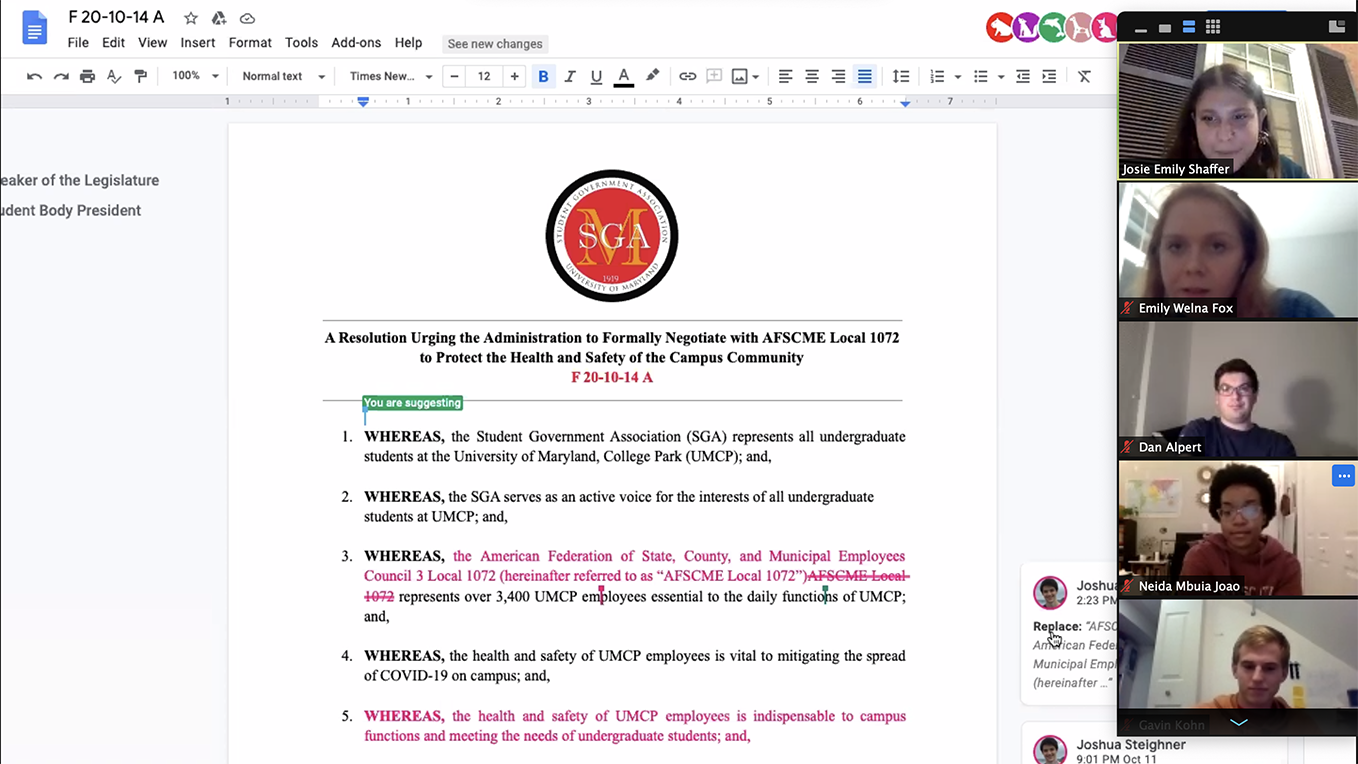 The University of Maryland’s SGA passed a resolution urging administrators to formally negotiate with the union that represents university workers at a meeting Wednesday night. The vote passed 39-0, with two abstentions.

The previous night, student organizers for the union and members of United Students Against Sweatshops, a new student organization that aims to support staff and student workers, provided testimony before the Student Government Association’s student affairs committee, which reviewed the resolution.

Over the past several months, the union — the American Federation of State, County and Municipal Employees Council 3 Local 1072 — has repeatedly asked for the university to bargain with its workers. Union members have said COVID-19 safety protocols are not consistently implemented, and that there still is insufficient protection for workers.

“It’s our duty as representatives of the student body and as members of the community more broadly to support the union and also make sure that admin is accountable for the promises that it’s made,” Steighner said.

During Tuesday’s discussion, students also raised concerns about the attorney representing the university in its collective bargaining discussions, Jay Krupin, who many have called “anti-union.” Michael Mareno, a member of USAS, recalled the way university President Darryll Pines reacted when he was asked several questions about the union, including one about Krupin, in an August Black Faculty and Staff Association town hall.

Pines criticized the line of questions, saying it fueled an “us-versus-them mentality.”

“That kind of goes to show a little bit that the university knows it might be in the wrong,” Mareno, a junior English and government and politics major, said at the committee meeting.

Emily Fox, a student organizer with the union, also noted that a significant number of workers are Black and/or Latinx — communities that are significantly more impacted by COVID-19 than other races and ethnicities.

Additionally, USAS member Neida Mbuia-Joao said, students have to know workers’ needs and rights aren’t just a staff issue. Students and staff interact on a daily basis — and if they get sick, students will get sick, too, she said.

“Whatever you need on campus, if you want to eat, if you want to go to the bathroom, if you want to get on a bus, you need a staff member to facilitate that function for you,” said Mbuia-Joao, a senior English major. “We shouldn’t think of them as a separate constituency from us, our fates are intertwined with one another.”

Currently, the union does not have a contract with the university that stipulates anything related to COVID-19, like contact tracing and personal protective equipment, said Fox.

“Usually, when they have a contract, they can challenge contract violations through a grievance process,” the junior philosophy, politics and economics major said.

At the committee meeting, President Dan Alpert said it was important to remember the SGA represents students.

“It’s important that we continue to stick to our core and protect our students and also recognize the relationship that staff has in ensuring student safety,” he said in an interview after the committee meeting. “At the end of day that’s what we want. We just want to keep people safe.”