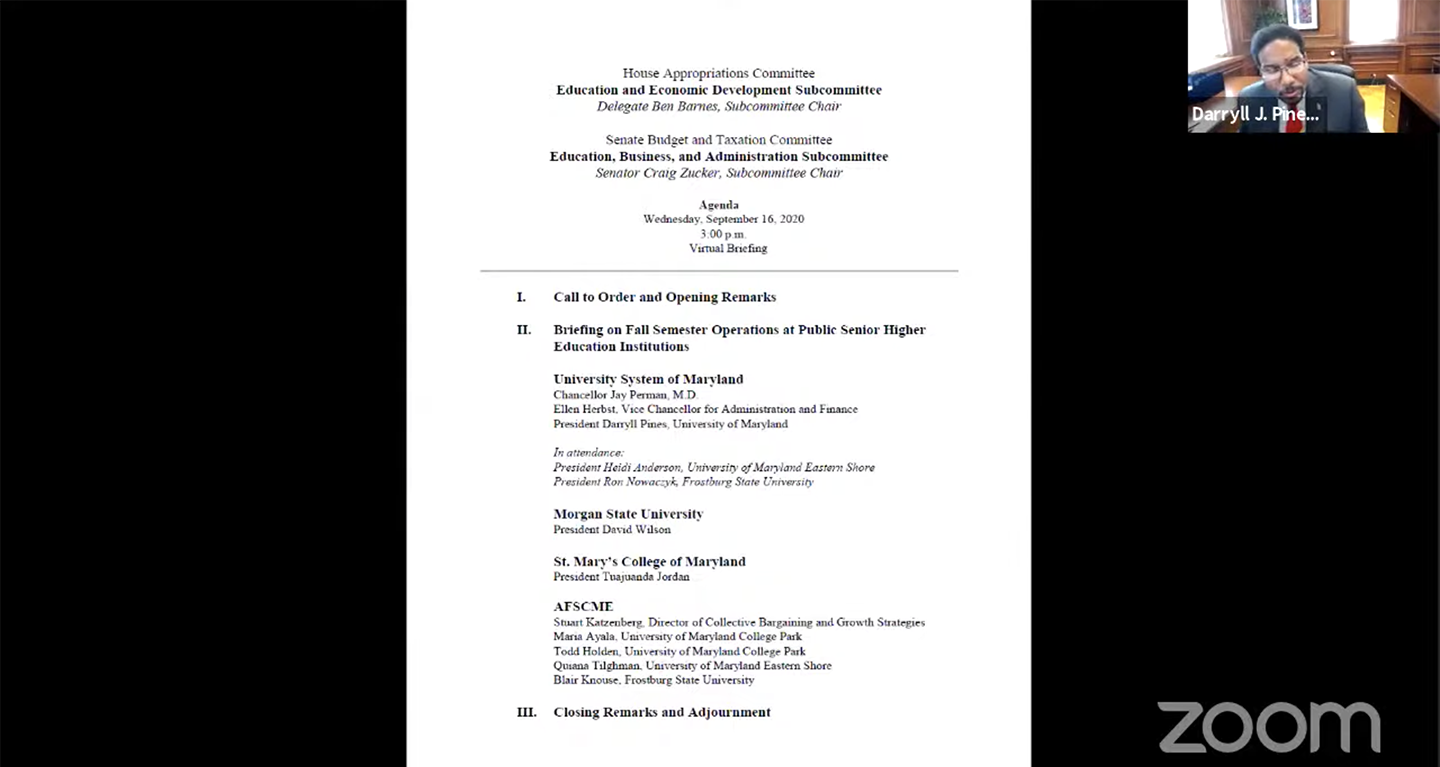 At the hearing, university President Darryll Pines said the university prioritizes the health of all members at the university community. (Clara Longo de Freitas/For The Diamondback)

University System of Maryland workers provided testimony Wednesday on the working conditions on system campuses amid the COVID-19 pandemic during a hearing in front of the Maryland House Appropriations and the Senate Budget and Taxation Committees.

At the hearing, four workers — two from the University of Maryland — urged the committees to increase their oversight on public universities. The universities should bargain with the union that represents workers systemwide and apply uniform safety policies across the system, they said.

“One clear lesson to have emerged from this global pandemic is that a crisis will reveal true character,” said Todd Holden, the interim president of AFSCME Local 1072, which represents workers at this university. “The revelation of true character doesn’t just apply to people, though. One can also see it expressed in our institutions.”

Several university leaders, including University of Maryland President Darryll Pines, also spoke to the committees about the safety precautions their universities have put in place to protect workers during the pandemic, as well as how the pandemic has hurt their institutions financially.

For months, union representatives have been pushing for the system to bargain directly with the union to work out a standardized set of health and safety policies for all system institutions. Currently, these policies vary across the system, said Stuart Katzenberg, AFSCME Council 3’s collective bargaining and growth strategies director.

Plus, according to an unfair labor complaint AFSCME Local 1072 filed in July with the Maryland State Higher Education Labor Relations Board, University of Maryland administrators have repeatedly rejected the union’s requests for the administration to bargain with members to create such a policy.

Katzenberg said the school has also refused to provide the union with data on how many staff members have tested positive for COVID-19 and has not kept the union attune to the locations of outbreaks on the campus. And, Katzenberg said, the union has not been involved in any campus plan for the health and safety of the system’s workers.

In his briefing to state lawmakers, though, Pines said the opposite, assuring the panel that the university collaborated with faculty and staff to reopen campus.

He also said the university has developed extensive health and safety measures, including enhanced cleaning and disinfecting of campus facilities and campuswide testing. All of these efforts were coordinated with state and county health officials and guided by recommendations from the system, Pines said.

Delaying the start of in-person undergraduate instruction at the university also allowed the school to conduct campuswide testing for faculty, staff and students, Pines said. He also noted that, though the university has implemented temporary salary reductions, most of the employees represented by the union will not be impacted.

The university has had nearly weekly meetings with union representatives since March, according to a statement from a university spokesperson. They also negotiated an agreement that “distinctly expressed how issues of health and safety protocols were to be addressed,” and the university has followed them, the statement read.

But in their testimony, workers said they continue to feel unsafe on the campus.

Maria Ayala, who works as a housekeeper at this university, told lawmakers that she was one of the 108 staff members for Residential Facilities who signed a letter in May demanding enough personal protective equipment when they returned to work. In the letter, they asked for three masks a day, Ayala said. Instead, she said they receive one mask each morning.

“We go through masks quickly while working. They get very sweaty before lunch,” Ayala said. “It is disgusting and dangerous to put them back on.”

Some workers have raised concerns about the university’s communication of different policies.

The university has translated coronavirus-related communications to both Spanish and Creole, according to information provided by a university spokesperson. Still, Ayala said leave policies have not been clearly explained — neither in English nor in Spanish, two languages she speaks — putting people at risk and causing unnecessary fear.

Since March, the union has had to deal with many flaws and deficiencies in this university’s COVID-19 response, Holden said.

Holden pointed to the recent incident with a Shuttle-UM driver, who said he was reprimanded when a group of young people threw an object at and broke his vehicle’s window after he wouldn’t let them board without masks.

“What is the priority here?” Holden asked. “Every worker should have a say in making their job safe, and in a state like ours their position is wrong, and it is deeply disappointing.”

[UMD shut off AC in many dorms to combat moisture. Housekeepers are falling ill without it.]

In his testimony, Pines expressed his commitment to keeping workers safe. And, he started his briefing by describing himself as a “product of two blue collar parents.” His father had a job at a supply center, while his mother was a bookbinder and a factory worker — both were members of unions, he said.

Del. Jared Solomon (D-District 18) asked system chancellor Jay Perman about the guidance the system has provided universities for working with unions and their workforces.

Perman responded that the system established early on that it would work to protect its employees.

“And that’s the way everyone has behaved,” Perman said. “We’re happy and eager to have discussions.”

Carolyn Skolnik, associate vice chancellor for the system, responded that, to her knowledge, there had not been any specific offer of hazard pay at any of the universities. However, she added, employees at this university who are asked to do housekeeping duties in quarantine or isolation houses are given the option to trade assignments.

Pines echoed Skolnik, adding that this university is preparing to hire outside contractors to clean quarantine and isolation spaces.

Holden told The Diamondback the oversight hearing was an opportunity to express workers’ voices. In his testimony, he said AFSCME will continue to fight to ensure that no worker is left behind.

“Because that is our character,” he said.