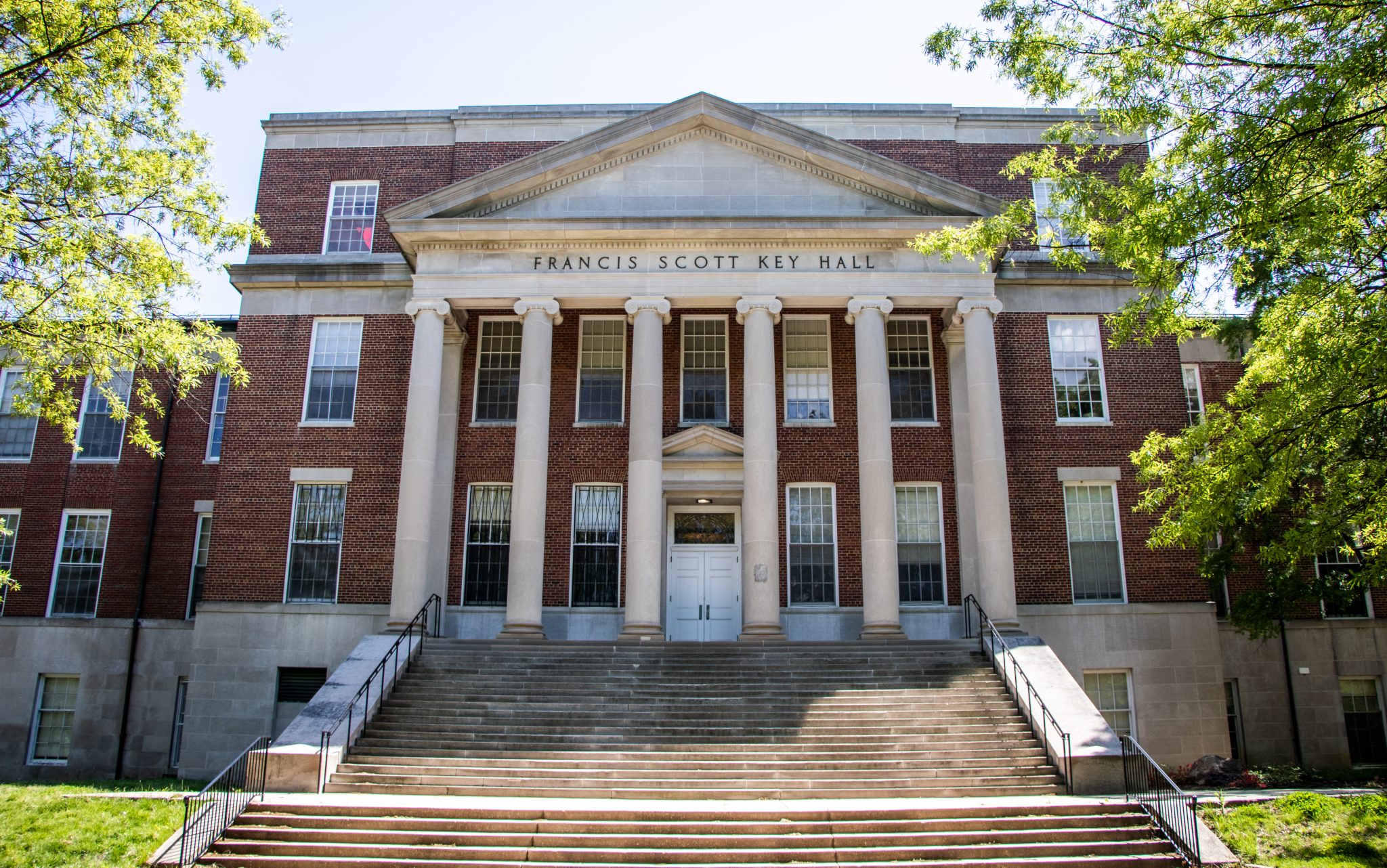 The office of Bonnie Thornton Dill, the dean of the university's College of Arts and Humanities, is located in the Francis Scott Key Hall. The college has been active in organizing against the new guidelines. (Julia Nikhinson/The Diamondback)

University of Maryland staff, faculty and students are sounding alarm over a recently released set of guidelines from the provost’s office that outline the expectation for staff members who work in academic and administrative offices to return to work in-person on the campus amid the coronavirus pandemic.

According to the guidelines, offices in academic units should open “as soon as possible” and no later than Sept. 14, and department heads, deans and directors should immediately begin drawing up plans to bring staff members — such as academic advisers and administrative assistants — back to the campus.

“The University of Maryland was designed to be a brick and mortar entity,” the guidelines read. “There is an implicit and reasonable expectation that if students (and faculty) return to campus this fall, there is a need for in-person staff coverage in the academic and administrative units.”

But many campus community members disagree. More than 250 faculty members have signed onto a letter to university officials, expressing disappointment in the guidelines. Faculty in the women’s studies department have also sent an open letter to university officials about the guidelines, and nearly 150 students affiliated with the arts and humanities college have signed onto another.

And while the guidelines make clear that staff members are expected to report back to the campus as soon as possible, in-person undergraduate instruction at the university has been delayed until Sept. 14, and when it begins, about 86 percent of undergraduate course sections will still be taught fully online.

Critics also point to the fact that many staff members have been successfully working from home since March. And according to the guidelines, a staff survey conducted over the summer showed many employees believe they were performing their duties from home as well as — if not better than — they did from on the campus.

[UMD shut off AC in many dorms to combat moisture. Housekeepers are falling ill without it.]

However, per the instructions, offices will be expected to have “some level” of physical coverage five days a week. And if the office wants to limit or shorten its in-person service hours from standard business hours, “there should be a clear rationale as to why abbreviated hours are sufficient for maintaining excellence,” the guidelines read.

At the University of Maryland, Baltimore County, another member institution of the University System of Maryland, only employees who have received the “necessary return to on-campus work approval” will be permitted to return to its campus. Otherwise, according to Phase 2 of the school’s reopening plan, most employees who can continue working remotely will continue to do so.

The staff survey also found that many employees are concerned about the risks of returning to the campus during the pandemic. Gwen Warman, an academic coordinator for the women’s studies department, stressed just how high the stakes are for her and her colleagues.

The workers union representing those employed at the university, the American Federation of State, County and Municipal Employees Local 1072, lambasted the guidelines as “paternalistic” and “out-of-touch” in a statement, labeling the guidance as “highly subjective and ripe to abuse workers’ safety and privacy.”

The guidelines do outline a series of “personal circumstances” that may affect a staff member’s ability to report to work on campus and should be accommodated. Supervisors should, for instance, grant flexibility to employees responsible for caring for children or older individuals, as well as those who must provide home-schooling due to school closures, according to the guidelines.

And though the guidelines list a few ways offices could plan staff rotations, Warman said they fail to take into account that some offices may have only a handful of employees to divide in-person work hours between. For instance, her office only has two staff members, including herself. And Warman lives with two people who are high risk for the virus, so she is set on not coming to campus.

In the statement, the union also pointed out that the committee charged with creating the policies was stacked with administrators and upper-level management. The university has made decisions “in a privileged bubble” with those who have “relative agency and choice, and without the input of front line workers who have the right to the same,” the statement reads.

Critics also stress that staff members do not have the same job security that tenured professors have. For that reason, tenured faculty members have a responsibility to speak out for those who might not have the ability to do so, said English professor Tita Chico, who started the faculty letter eventually signed by hundreds of her colleagues.

“I want to encourage the university as a civic institution to act in ways that support the most vulnerable among us,” she said. “We need to be particularly mindful of the inequities that the pandemic is exaggerating.”

Tina Lorick, a payroll coordinator for the Department of Electrical and Computer Engineering, has two other coworkers in her office. And Lorick won’t be able to come to work on the campus: Her sixth-grade daughter will be attending school virtually every day, and Lorick doesn’t have child care.

But even if Lorick were able to come to the campus, she’d be scared. She’s concerned the university’s testing system isn’t adequate.

In a campuswide email sent Monday, university President Darryll Pines recognized that a “significant number” of faculty and staff members have reported unease at returning to the campus.

Before students and employees could return to campus, they were required to provide proof of a negative COVID-19 test. Pines has also said there will be a second round of testing events in September, and after that, the university will test about 1,500 community members for the virus each week.›

The guidelines also lay out a series of steps the university has taken to protect the health and safety of campus workers: Plexiglass barriers have been installed in high-traffic locations, for instance, and air handling systems in offices have been checked and upgraded where needed. Everyone is also required to wear a mask on the campus except in private offices and employees and students are required to self-monitor and report symptoms related to COVID-19. Heavily used buildings have been modified to streamline traffic flow.

In Monday’s email, Pines pushed back against the idea that university actions have been motivated solely by profit, highlighting various decisions that have put health and safety first — supporting the Big Ten’s decision to postpone fall sports, for instance, and reducing dorm occupancy.

As a result of financial losses incurred by the COVID-19 pandemic, the university now faces a sizable deficit: former university President Wallace Loh told faculty and staff in April that the school was expected to lose close to $90 million last semester. But Pines stressed the university has “fought hard to minimize the impact on the livelihoods of our faculty and staff.”

“When we transitioned to a fully online environment last spring, hundreds of union and non-union staff were left unable to work because they needed to be physically on campus to perform their duties,” Pines wrote. “And yet we continued to pay their full salaries. Because this is not about money. It’s about each one of you.”

Still, Warman says the guidelines seem to be motivated by the intention to make campus feel normal. But that just isn’t realistic, she says — the world continues to be engulfed in a pandemic.

“Everyone wants to do their job and take care of the students and be safe,” she said. “We’re not trying to be difficult. We’re trying to make sure that everyone can give the best services in the safest way with the least number of possible exposures.”