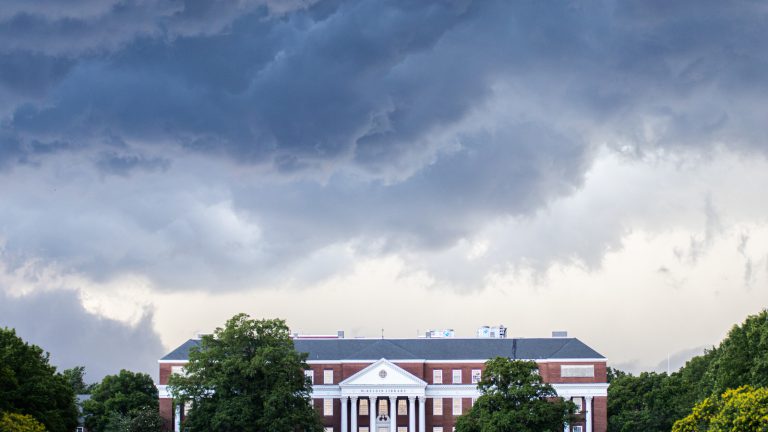 McKeldin Library, a popular study spot for students, on June 25, 2020. Some incoming freshman who choose to live at home during the upcoming fall semester fear they will miss out on college life. (Julia Nikhinson/The Diamondback)

This fall, 92 percent of the University of Maryland’s undergraduate course sections will be at least partially online, according to an independent analysis by The Diamondback, leaving freshmen with a difficult decision about on-campus housing.

Incoming freshmen have a lot of factors to weigh as they decide whether to live on the campus in the fall: financial costs, health concerns and, crucially, how many classes they’ll be taking in-person.

The university’s updated fall course schedule was made available to students Wednesday on Testudo, with finalized information about which courses are being offered in-person and which are being offered online amid the coronavirus pandemic.

“A big part of the freshman experience is getting used to college life,” said Eric Kong, an incoming freshman biochemistry major who plans to live at home this fall. “I won’t have that same experience.”

Kong is scheduled to have one class — a chemistry lab — administered in-person. The lab is one of about 450 undergraduate sections set to be face-to-face.

For incoming freshmen — 92 percent of whom lived in campus housing last fall — this prevalence of online lower-level courses has become a major factor to weigh as they decide whether to live on the campus.

“College is a big cost,” he said. “If I can save a little bit of money, I think it’s a pragmatic decision.”

The deadline for students to cancel their housing agreements without financial penalty is Monday — five days after the final course listings were made available. Originally, the Department of Resident Life set the deadline as July 17, but earlier this month it postponed the deadline to July 20, noting that new developments might cause students to reconsider living in dorms.

For incoming freshman Sareet Nayak, the decision was more fraught, but it became easier when she learned her introductory computer science course would be completely online. CMSC131 — one of the first courses required for computer science majors like Nayak — is normally held in a large lecture hall with more than 300 people.

This fall, though, all 42 sections of the course are completely online, both for lecture and for discussion.

“Because it was all online, I decided to stay home,” she said. “It makes sense that they’re doing it, but at the same time I don’t know if I want to pay all of that for no reason.”

Elizabeth Lawlin, an incoming freshman piano performance major, had a similar experience. When the schedule updates were first released on Wednesday, she saw some of her music classes were set to be face-to-face and thought she’d have to come to campus in the fall.

But the music school sent an updated message on Thursday, announcing that it is in the process of reclassifying some face-to-face courses as blended learning. Students also have the option to stay online for the whole semester, according to the message. Now, Lawlin said, she’s leaning toward staying home.

But staying at home doesn’t make sense for every student.

When Emma Friedman, an incoming freshman planning on majoring in astronomy and chemistry, saw that all her classes were set to be online, she sprang into action, emailing the Freshman Connection program and checking Testudo to see if she could wrangle some in-person classes.

“A lot of kids are staying home, but that’s something that works for them,” she said. “And I know it will not work for me.”

Friedman is from Chicago, so she will be traveling between the campus and her home far less than other students might have, and she’ll be taking all the necessary precautions, she said.

She’s been weighing her options, she said. “Is it going to be more or less harmful for me to stay at home?”

Friedman managed to get a spot in one of the 21 percent of UNIV100 sections that are face-to-face, as well as one in a in-person chemistry lab.

And though she was prepared to take ENGL101 this fall, all 129 sections of ENGL101 and its variants — the only courses that fulfill the General Education requirement for academic writing — are online. But with the help of the Freshman Connection staff, she was able to find an in-person linguistics course she could take to fulfill a different Gen Ed instead.

If Friedman hadn’t gotten the chance for some in-person instruction, it might’ve been a different story. She might have taken a gap year or enrolled in courses at a community college, she said. But for now, she’s planning on moving into a single room on campus this fall.

“I’m fortunate enough where I was not economically impacted due to this pandemic,” she emphasized. “To make a call like that, you have to acknowledge the great privilege and how incredibly lucky I am right now … for a possibility like that to even be on the table.”

Those who are thinking about staying home, like Lawlin, are worried about missing out on campus life. She’s talked to a few other freshmen in her major, and they’re all coming to the campus in the fall.

“I don’t want to miss out because other piano freshman people are going,” Lawlin said. “But I still don’t want to just be in my dorm, doing online stuff all the time.”

But with many freshmen deciding to stay home, there’s company in knowing that everyone is dealing with the same thing.

“Staying at home is a bit isolating,” Kong said. “When you have people that you know are also doing the same, it makes the decision a little bit easier.”

Still, with 92 percent of undergraduate sections at least partially online, the new dining hall procedures and a variety of other safety measures in place, life on campus won’t be the same.

“I’m not going to stay in my dorm 24 hours a day, taking classes online,” Friedman said. “I’m going to make this as normal as a ‘freshman experience’ as I can, while still maintaining the CDC guidelines.”