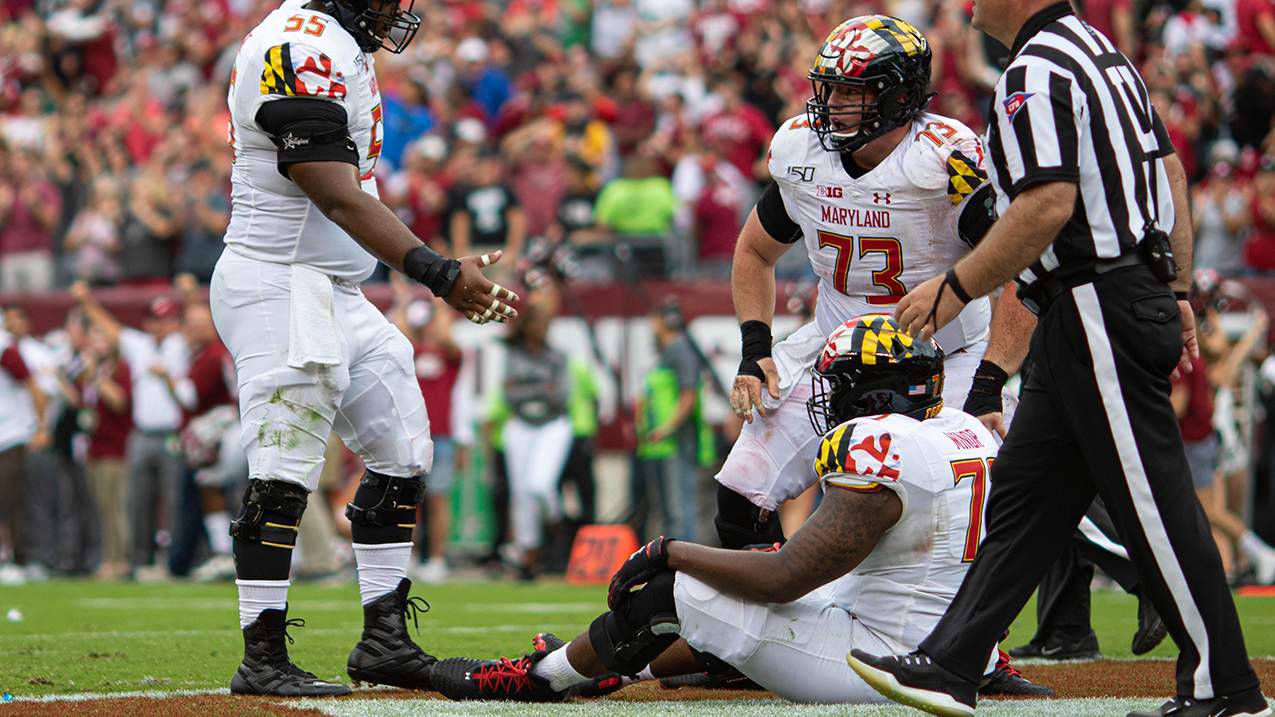 With about two minutes remaining in the first quarter on a chilly November afternoon, Maryland football found itself in desperate need of a first down. Facing a third-and-long and already trailing by 17 to Nebraska, the Terps were looking for some kind of momentum to right the ship.

Instead, the play ended with quarterback Josh Jackson planted in the ground, the Huskers’ rush overwhelming Maryland’s offensive line.

It was an all-too-familiar scene for that unit in 2019, as the Terps’ linemen struggled against stronger, more experienced Big Ten competition and surrendered 3.2 sacks per game, the most in the conference.

But head coach Mike Locksley has seen signs of improvement heading into this year’s campaign, thanks to an extended offseason that has allowed his inexperienced corps to grow.

“I think it’s a work-in-progress, as with anything … they’re pretty close to being one of the strengths [of this team],” Locksley said.

[Maryland football is ready to rely on its wide receiver depth]

Maryland enters this season needing to replace three key contributors. Sean Christie and Ellis McKennie graduated, while expected starter Austin Fontaine — who appeared in every game last season — opted out at the beginning of August due to concerns about the coronavirus.

The Terps will bring back some experience from last year’s squad. Senior Johnny Jordan — who was named to the Rimington Trophy watch list for the nation’s top center Wednesday — will anchor the line, while junior Marcus Minor will move to the interior to replace Fontaine.

But the rest of the group is young and inexperienced. Jaelyn Duncan and Spencer Anderson both saw significant playing time as true freshmen last season — and both are likely to sit near the top of the depth chart in 2020 — but they struggled against veteran defenses at times. Other starting contenders include Evan Gregory, TJ Bradley, Johari Branch and Amelio Moran, although none of them have played considerable minutes for the Terps.

Still, Locksley has seen positive steps forward from the group, and he has been pleased by the maturity of the young players. Anderson’s performance in practice has particularly stood out to both the coach and his teammates, with Minor praising the sophomore’s grasp of the playbook and fundamentals.

Beyond Anderson, Minor said the corps has improved its chemistry across the board. That, he said, will be key to progress on the field this season.

That has been noticeable to Minor’s teammates on the other side of the ball.

In preseason, the line has not been as consistently overwhelmed like it was in 2019. The group has been much faster, stronger and more competitive during practices.

“It’s a good group across the board,” safety Nick Cross said. “[The new guys] came in and soaked up the playbook like a sponge, they came here ready to work, and the veterans provided a lot of leadership and big brother mentorship, and it definitely shows.”

Locksley has also taken note. Maryland’s second scrimmage Saturday featured a more natural ebb and flow than the previous week’s simulated game, the second-year head coach said, in part due to stronger play in the trenches.

He also noted the group has been working on pass protection and saw some strides in that regard. Despite all this, Locksley is still concerned with the group’s overall inexperience and said a lack of depth could hurt them this season.

“That’s the one position that you can’t rush the growth,” Locksley said. “When you have true freshmen and you’re two deep, that’s the concerning piece for me.”

The first real test of that growth will come Oct. 24 when the Terps take on Northwestern. It will serve as both a litmus test and a building block for the group before a run of top-25 opponents begins the following weekend with Minnesota.

The line will set the tone for Maryland’s offense, and Minor said he and his fellow blockers are ready to take up that mantle.