10 months after its last game, Maryland football is putting its pads back on 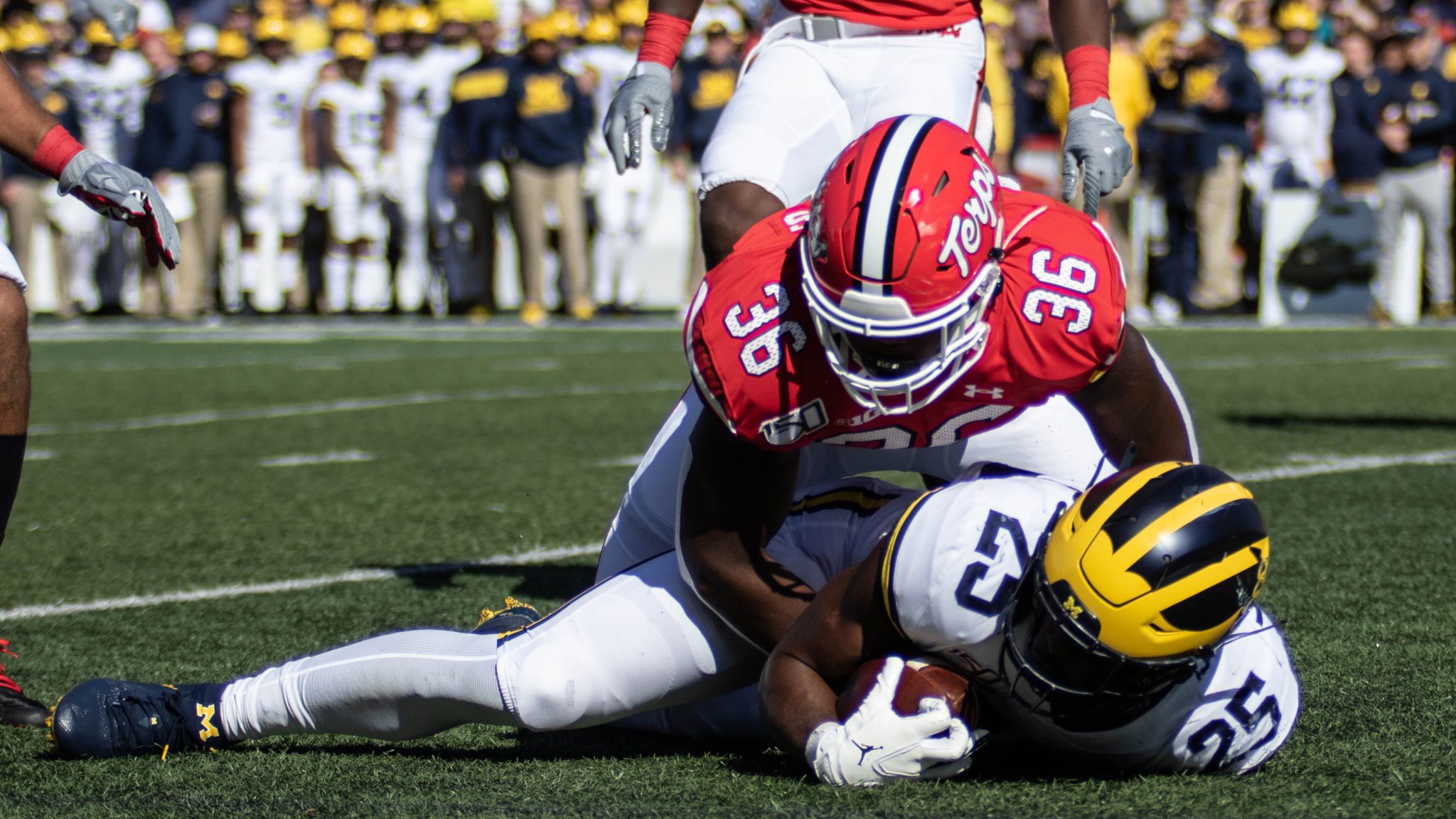 Maryland linebacker Cortez Andrews brings Michigan running back Hassan Haskins to the ground during the Terps’ 38-7 loss to the Wolverines on Nov. 2, 2019 at Maryland Stadium. (Julia Nikhinson/The Diamondback)

As Michigan State quarterback Brian Lewerke dropped to a knee and the clock ran out, Maryland football finally put a disappointing 2019 campaign that culminated in a 3-9 record to rest. The Terps trudged to the locker room and took off their pads one final time that season, hoping to start anew in 2020.

But on that cold November evening in East Lansing, Michigan, little did Maryland know it wouldn’t wear those pads again for ten months.

Now, coach Mike Locksley’s squad is back. The Terps began padded practices Wednesday as part of a gradual return to play following an extended pause due to the COVID-19 pandemic. Though a small step on the path to the Oct. 24 season opener, it’s significant in helping the team retain a relative sense of normalcy.

“I feel really comfortable doing things normally the way we would do it because of the [testing] protocols,” Locksley said. “Our guys were pretty excited about the opportunity to go out and start to develop the callous that’ll be needed for us to play the game of football.”

Maryland’s spring practices — which are mostly light contact and typically run with few pads — were halted in mid-March due to the pandemic, and the team has seen several stops and starts in formal workouts since then. The Big Ten did not allow padded practices over the summer due to concerns over possible COVID-19 transmission and organized activities mainly consisted of individual drills, weight room reps and film study.

But the Terps were cleared to put on the pads as the conference began daily rapid COVID-19 testing Wednesday in hopes of preventing an outbreak. For wide receiver Jeshaun Jones, it was a freeing moment that translated to increased energy during practice.

“With no pads, it’s like you’re playing, but you’re not really playing [full-on],” Jones said. “Now that we get to thud and do all those types of things, it adds a little more to practice.”

Wednesday’s practice was a particularly big milestone for Jones, who is returning from a torn ACL that sidelined him all of last season.

Despite rehabbing during the height of the pandemic and missing out on what would normally be valuable summer practice time, Jones hasn’t missed a step, Locksley said.

“Jeshaun is one of those guys on our team we feel brings … big playmaking ability,” the second-year head coach said. “There’s still some technical things and fundamental things that we’re going to continue to sharpen those tools … but there’s no doubt having a healthy Jeshaun Jones is good for Maryland’s offense.”

Even with the highly anticipated return to padded workouts, Maryland has still made the most of its limited practice time the past six months. The Terps worked on improving their mental fortitude, learning the playbook and developing stronger personal connections.

About half of the team is new to Maryland — be it freshmen or transfers — and Locksley said several players took it upon themselves to lead small workouts during the time away to help newcomers assimilate.

Now, the Terps are hoping those bonding exercises transfer to the field, where the process of restarting physical play begins.

“[The time off] allowed us mentally to really be prepared for what’s coming up,” linebacker Cortez Andrews said. “Now with pads on, we’re trying to get the toughness back, the techniques of tackling, making the correct blocks and correct fits, and stuff like that.”

And Locksley is already seeing a difference, with players blowing fewer assignments and staying more focused during the first two days of padded practices. It’s not quite the same, as Maryland is working on “thudding” — tackling without bringing the player to the ground — before ramping up to full-contact workouts and scrimmages.

But for now, Locksley is just glad his team has returned to a mostly regular practice setting. And after months ruminating on how to come back from a poor 2019 season, the Terps hope to see improvement across the board.