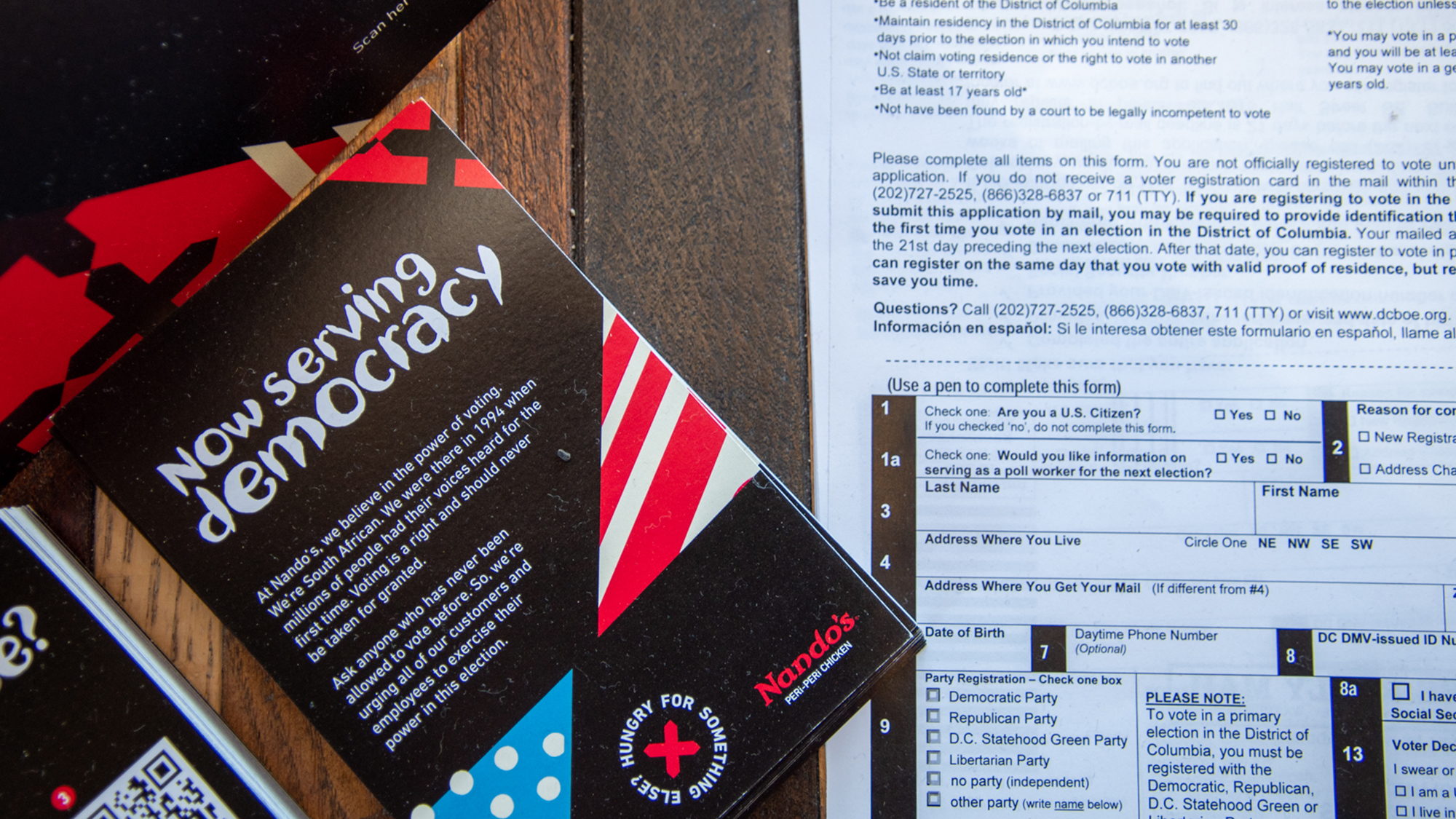 At the Nando’s in College Park, customers can eat, catch up with friends and now, receive resources to help them register to vote in the upcoming presidential election.

Starting on Sept. 22, National Voter Registration Day, the South African restaurant chain became a “one-stop shop” for voting resources in an effort to increase voter registration — offering informational handouts and, for the first time ever, adding voter registration forms to their menus that customers can order for free.

“This year, we are trying to empower as many eligible voters, whether that be our own employees … or our guests to vote,” said Sam Blum, Nando’s brand manager and University of Maryland alumnus.

The flyers, Blum said, include information such as how to request a mail-in ballot, nearby polling places and how to register to vote. He added that he’s most excited about customers being able to order their voter registration forms with their in-store, takeout or delivery orders.

“I think that there are a lot of people that are hungry for change, and we want to make sure that everyone can have a voice,” Blum said.

Though the effort will end on Oct. 13 in College Park, the restaurant’s pro-democracy platform is connected to the South African fight for democracy. With centuries of oppression from Dutch and British colonists and decades of apartheid, the country’s first step for a true democracy didn’t happen until 1994, the first year Black South Africans got the opportunity to vote.

“We know that it really is a special privilege to be able to vote, and so we want to make sure that everyone can take advantage of that,” Blum said.

Sam Orelowitz, a freshman enrolled in letters and sciences at this university, said he was already registered to vote and in the process of requesting a mail-in ballot. He said many social media initiatives have been pestering him to register and vote, and he thought Nando’s was doing its part in that push.

“I saw [the forms] a few days ago, they have English and Spanish so they’re really trying to accommodate, and I think that’s incredible,” Orelowitz said. “I would definitely take the form if I wasn’t already registered.”

Conor McCue, also a freshman enrolled in letters and sciences, came in with Orelowitz for their takeout order. He said the initiative was timely and significant with the upcoming presidential election.

“I mean, there’s just so much divide in America. I think it’s important that we try to bring everyone together,” McCue said.

Employees also get certain benefits with this initiative, Blum said. They’ll receive paid time off on Election Day so they don’t have to choose between work and voting. Additionally, they have access to all the resources customers get but will also be given transportation resources to get to polling stations.

Employee Amy Guenterberg is already registered to vote and noted that a lot of people seem to be too, since there’s an understanding that the upcoming election is important.

Still, she’s noticed people picking up flyers now and again. She praised the restaurant’s efforts to make it easy for anyone to get information, including the underprivileged community of College Park.

“It just makes it really accessible for all populations or all demographics of College Park, not just the students here but also the residents,” Guenterberg said.

Riley said the process to register and vote in the U.S. is too complicated.

The initiative could simplify the process, especially for younger voters who might be unfamiliar about some aspects of voting, Cain said. And with places like Nando’s making it easier for them to become voters, there may be more younger voters casting their ballots this year.