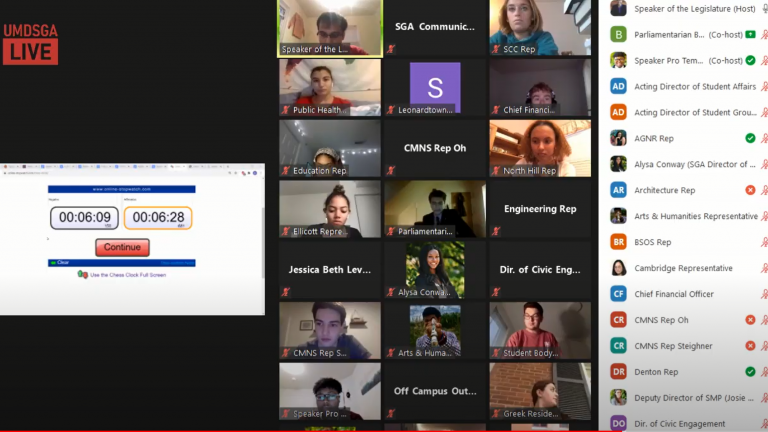 The University of Maryland's Student Government Association held its first virtual meeting of the semester on Sept. 2, 2020. (Lyna Bentahar/For The Diamondback)

In a split vote in its first meeting for the school year, the University of Maryland’s SGA began to confront complications that have plagued its executive board since the body’s former president vetoed changes made to its bylaws at the end of last semester.

During the Student Government Association’s annual omnibus meeting, representatives voted to approve revisions made to the group’s governing documents, including the decision to retire the position of financial affairs director and replace it with a chief financial officer. Just days later, though, then-SGA President Ireland Lesley declined to sign the changes into law, criticizing several of the revisions in a statement.

Though she didn’t mention the group’s decision to swap the executive board’s financial affairs director with a chief financial officer, Lesley’s veto cast the position into limbo — despite the fact that the student body had already voted to elect Kane Zambelli to that role in April.

On Wednesday, though, representatives moved, in a 30-0-1 vote, to amend the group’s bylaws to make Zambelli’s position official. Still, they held off on deciding whether to allow the chief financial officer and members of the finance committee to be financially compensated, with many of the body’s newest members raising concern that they were not yet properly trained to make an informed vote.

While the SGA bylaws do not call for compensation for all its elected officials, it has done so for the leader of the financial affairs committee and its members, as they hold positions in the administration that require a significant amount of free time.

Speaker pro tempore Hunter Petit voiced his own concerns that waiting to include compensation for committee members would only delay and complicate the financial process.

“If we don’t actually deal with this right now, it’s possible for it to either become much more of a difficult process later or less convenient,” Petit said. “I don’t think that that is necessary, especially considering these changes were already approved.”

Newly elected representatives in the legislature, however, were unconvinced that they could vote on anything to do with finances since they had not yet gone through training about the funding process for student groups. Senior representatives tried to reassure their colleagues that the money for these positions had been already allocated by the previous legislature, but the newly elected legislators did not find last year’s decisions relevant.

“Not only were those legislators finance-trained already and fully able to make those decisions, they also no longer represent the campus,” said Josh Steighner, a representative for the computer, mathematical and natural sciences college.

The debate incited a motion to delay the entire bill until after newly elected representatives could receive financial training. The discussion, though, was complicated by the fact that while this training was originally scheduled for the third week of September, it is likely to be pushed back due to complications of the coronavirus pandemic.

[Guide: What you need to know about life at UMD in the age of coronavirus]

Zambelli also stressed during the debate that any financial training that legislators undergo has nothing to do with the vote at hand, which was to amend the bylaws so that the chief financial officer could make necessary financial decisions as early as possible. Without the position’s existence, the financial affairs committee wouldn’t be able to fund student groups through the month of September.

“I would be fine with [tabling the bill],” said Kislay Parashar, speaker of the legislature. “But it’s going to be a nightmare, financially.”

While the bill was voted on and passed with no dissenting votes, a split vote still rejected the decision to include compensation in the bylaws for the chief financial officer and financial affairs committee, 13-17.

North Hill Representative Gabrielle Coleman, who was just elected last April, was happy with the resulting vote, as she and many other representatives were not comfortable voting on anything related to the process of allocating funds, even if the vote doesn’t directly affect the funding itself.

“[We’re told] not to vote on anything financial until we’ve been financially trained,” she said. “So that was a really big glaring thing to a lot of us.”

“[This decision] will hamper the financial process, though,” he warned.