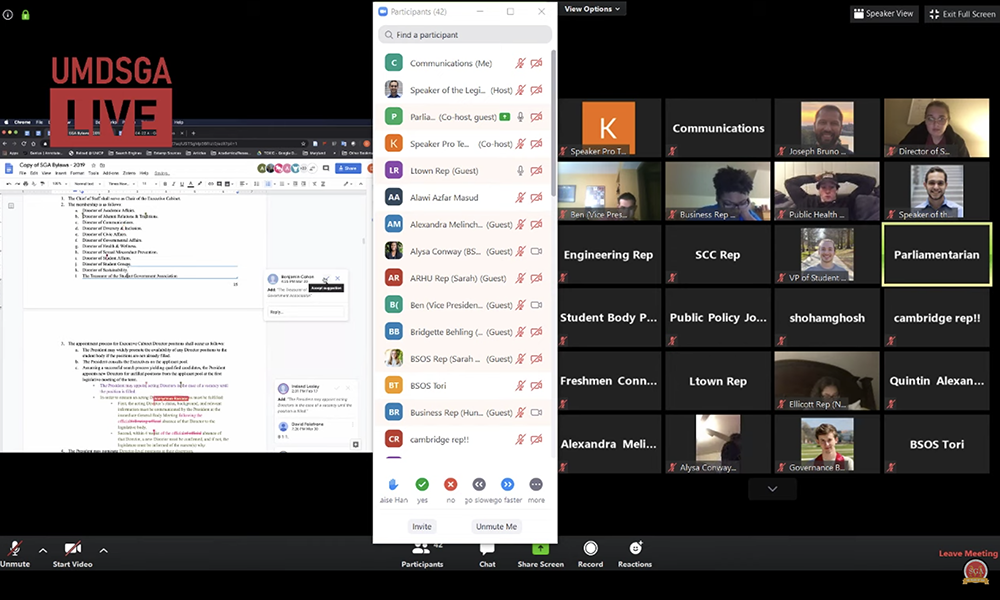 The university's SGA debates the ethics committee and student funding at its final meeting of the legislative session. (Daisy Grant/For The Diamondback)

The University of Maryland’s SGA reorganized its accountability and ethics committee and made changes to its policies for student organization funding early Thursday morning, at the body’s final meeting of the legislative session.

Legislators deliberated for nine hours over a Zoom call, parsing through a host of amendments to their bylaws. As the night dragged on, legislators seemed to grow frustrated with the lengthy process.

“It’s worth noting that we’re now 6 hours and 24 minutes into this,” David Polefrone, the body’s parliamentarian, said at one point. “Let’s please try to escape.”

At about midnight, the conversation turned to the accountability and ethics committee. Even before the discussion began, Polefrone recognized that it would be a contentious one.

“I don’t want to kick the hornet’s nest quite yet,” he said the first time his cursor trailed over the committee’s title in the Google Doc members were using to edit the Student Government Association’s bylaws. “I’m having a good night for the next 30 minutes.”

Indeed, many members were quick to describe the committee — which enforces the body’s ethics handbook and investigates internal misconduct — as having been clogged up with “squabbles” as of late. Polefrone chimed in to say that it took up 15 cases in the last month, as opposed to “maybe five” for the rest of the entire school year.

The committee also played a role in the days leading up to last week’s elections.

At the debate on April 20, heated exchanges surrounded the impeachment investigation of speaker David Rekhtman, who was also running to be vice president on the ImpactUMD ticket. Earlier this month, the body opened an impeachment investigation after several legislators alleged that Rekhtman disrespected fellow members, manipulated records and mishandled student concerns.

However, in a closed executive session last week, the ethics and accountability committee decided not to proceed with the impeachment. Rekhtman did not win his election.

After some debate over whether to get rid of the committee entirely, legislators ultimately retained it, voting to expand its membership and boost its transparency.

Furthermore, all members will be confirmed by the legislature — a change that drew alarm from SGA President Ireland Lesley, among other members of the body. Jonathan Frank, chief justice of the governance board, raised concern that this structure would put a magnifying glass on the committee’s membership, which before was anonymous.

Such a structure could allow for more diversity in the committee, said Elena LeVan, director of sexual misconduct prevention. It also protects members of the committee, she added, since they won’t be involved in every single incident.

Off-campus outlying representative Alexandra Melinchok alleged members currently used the committee to handle petty issues or as an intimidation tactic. She’s been sent to the committee herself, she said, and the experience was exacerbated by the fact that members of the committee are anonymous.

“We’re talking about problematic power dynamics,” Melinchok said. “It makes me feel extremely uncomfortable that people who have the ability to send me to ethics through intimidation, that they know who’s on ethics because they’re in the in-group.”

At the start of the discussion, Bryce Kowalczyk, an associate justice for the governance board, advocated for the removal of the accountability and ethics committee altogether. The governance board — which presently hears issues on constitutionality and appeals, among other types of cases — could absorb the smaller matters that are usually directed to the committee, Kowalczyk argued.

“The governance board is probably more trusted than the accountability and ethics, more overall,” he said. “Ethics really has an image problem and the governance board may or may not have that problem currently after recent decisions.”

However, although financial affairs vice president Ben Cohen acknowledged the committee is not his “favorite,” he said there was room to improve the ethics process, rather than outright disband the committee.

Still, he expressed interest in dissolving the committee down the line. But removing it now, he said, could mean even fewer “checks and balances” on the ethics process.

The body also briefly considered revisions to the committee’s appeal process, before voting the measure down.

In another close vote — one that overrode Lesley’s ardent opposition — the body also voted to revise its policies restricting student organizations from using SGA-granted funding to pay wages or salaries.

Previously, the body’s bylaws allowed an exception to this rule to organizations that gained the approval of the student body to use their funding in this way through a referendum. MaryPIRG, a nonprofit student lobbying group that bills itself as nonpartisan, pitched a successful referendum in 2018 to dedicate funding toward two non-student salaries.

However, as deliberation dragged through the early morning, Cohen fervently called for that exception to be wiped from the body’s bylaws.

“There is not a single group that could not use [a paid staffer], but then we’d be draining all the money, and the money is supposed to be used [for] student activities — not to pay salaries,” he said.

Lesley, though, raised concern that the body had not discussed removing the exception with MaryPIRG prior to the meeting. MaryPIRG currently employs an organizer, who helps hold phone banks and train students on advocacy work, Lesley said, adding that the staffer is accountable to all student groups on campus

“Do you want this done at 2 a.m., when a good amount of [the legislature] isn’t here, and there are no student concerns held because people didn’t know that we were doing this here?” he asked Cohen. “Is that the look that you want?”

Cohen, however, argued that he had proposed the change in February. Furthermore, he said, MaryPIRG had not issued a referendum during this year’s election season — meaning that it would not be able to dedicate funding toward salaries next year, as the exception required organizations to hold a referendum every two years.

The revision would also not stop MaryPIRG from receiving funding for other resources, Cohen said. Rather, it would just prevent organizations from holding similar referendums in the future, he said.

Behavioral and social sciences representative Victoria Nefflen agreed with Cohen, stressing that the adaptation of the bylaws wasn’t an attack on MaryPIRG. While she recognized that the organization did important work, she still described the fact that student fee money was going toward funding somebody’s salary as “atrocious.”

Lesley chimed in to say she wasn’t suggesting that the body shouldn’t consider the change in future years — just that it had not considered the consequences of the action enough to pass the motion.

Despite her objections, though, the amendment passed 14-13.

After the vote, legislators cycled through page after page of the body’s bylaws, at some points zipping through mainly technical changes on the document to clarify language and, at others, getting caught up in winding debates.

As the clock passed 3 a.m., members enthusiastically seconded a motion to adjourn, concluding the meeting. The revisions had passed.

“This has been incredibly encouraging, and this is not for nothing,” Polefrone said. “We really did a lot here, and I think we made a lot of good changes.”