Days before SGA elections, candidates clash over sustainability plans, other issues at debate 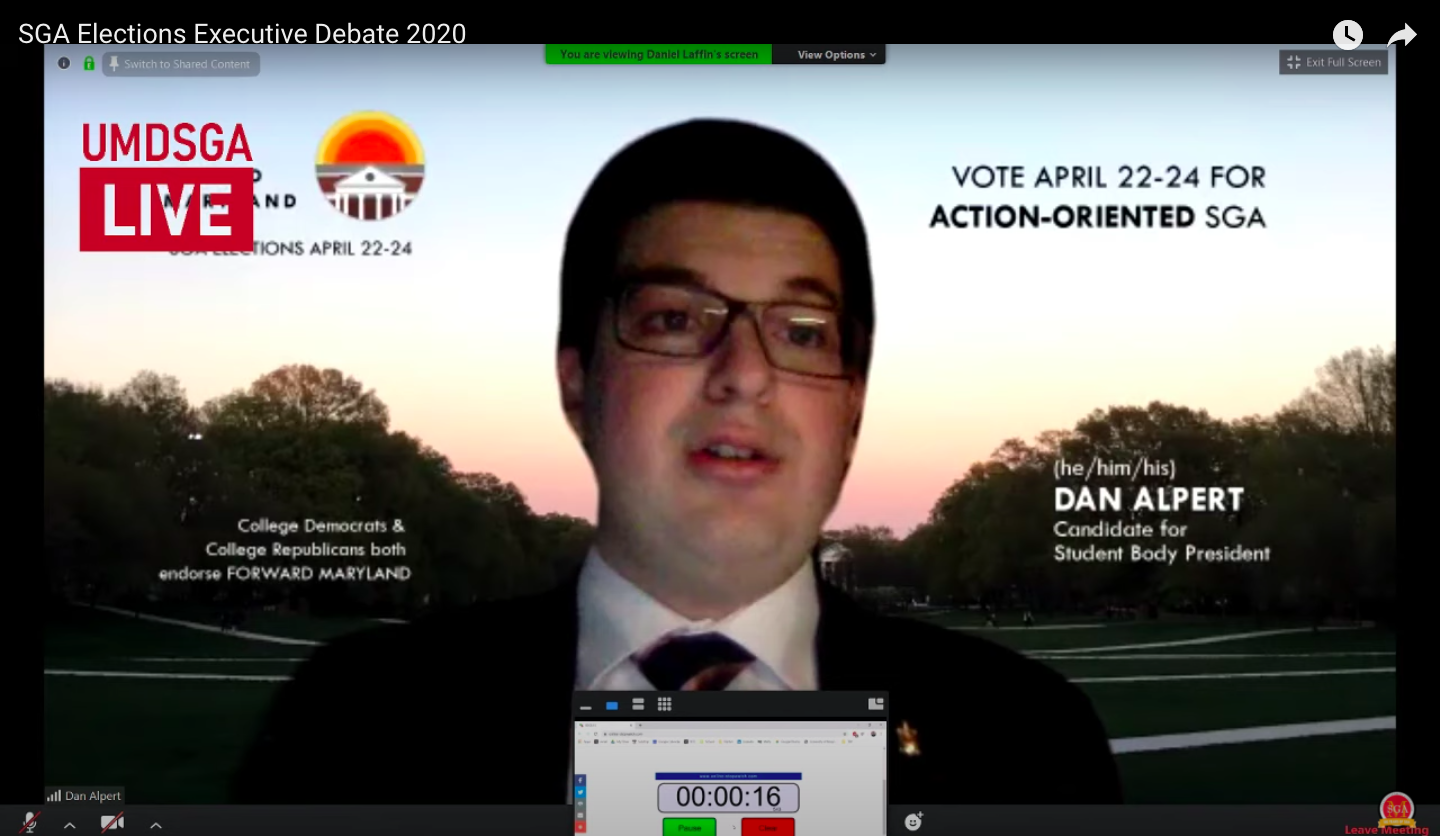 Dan Alpert, an SGA presidential candidate running with the Forward Maryland ticket, speaks at a virtual debate held over Zoom on Monday. (Angela Roberts/For The Diamondback)

Just two days before voting opens up for the University of Maryland’s SGA elections, candidates from the two parties gunning to represent the student body pitched their competing visions in a virtual debate.

While Monday’s two-hour discussion was largely cordial, candidates clashed over a wide variety of issues — from the efficacy of each party’s plans for improving sustainability on campus to how best to engage with students — with some of the most fiery exchanges centering on the ongoing impeachment investigation into David Rekhtman, the current speaker of the legislature and ImpactUMD’s vice presidential candidate.

The impeachment investigation into Rekhtman was opened at an SGA meeting earlier this month, after several legislators accused the speaker of disrespecting members of the student governing body, manipulating records and mishandling concerns from the group. However, Rekhtman said during the debate that he is proud of his record with the group, explaining that there have been more bills and student outreach during his tenure as speaker than ever before.

“The key there is to realize that everyone on SGA, regardless of what party they’re running for, is there for the same reason. And that is to improve the student experience,” he said. “The debate is not about whether or not to improve it — the debate is about how to do it.”

Later on in the debate, Rekhtman went on to describe the impeachment investigation as a “smear campaign” orchestrated by the Forward Maryland ticket. As speaker, he said, he has worked with every representative on any issue they felt the need to put forward for students.

“The reality is in order to be impeached, you have to lose the respect of the majority of the legislature, and that’s unfortunately what happened,” he said.

The two sets of candidates also hit a sticking point when discussing their plans for promoting sustainability at the university, specifically in terms of transportation.

Both parties agreed that the parking situation on campus needs work, with Rekhtman describing the situation as a “complete mess” and Alpert accusing the Department of Transportation Services of treating student fees like a “never-ending piggy bank.” However, Rekhtman pitched the construction of more multistory parking garages as a solution, while Alpert called for the improvement of sidewalks and public transportation.

“We have to choose the better of two evils, and I think there are ways to build multistory lots in more sustainable ways,” he said.

“The lesser evil is public transportation with the Purple Line, with better bus systems and with the Metro,” she said. “That is the best way to help UMD become more sustainable.”

Kelly Sherman, ImpactUMD’s presidential candidate, encouraged students to let the party know if there is any way they’d like to see its platform improve by filling out a Google Form it plans to circulate.

However, the mention of Google Forms by ImpactUMD candidates swiftly became a popular attack point for Forward Maryland candidates during the debate. Sending out Google Forms is not the best way to collect student feedback, Alpert emphasized — it’s going out and speaking with students. And that’s what candidates in his party have been doing throughout the campaign, he said.

While the debate was crowded with disagreements, the candidates found common ground when discussing the implications the COVID-19 pandemic has had for students. They agreed that the outbreak — and the extended period of social isolation — has upended the mental health of many students who will require support whether or not they are able to return to campus in the fall.

Forward Maryland and ImpactUMD both advocated for the expansion of telehealth services, with Sherman expressing concerns about the  difficulties the Counseling Center faces in providing help to students across state lines.

Prasetiawan also highlighted the importance of Forward Maryland’s plan to create liaison positions in the SGA for first-generation low-income students, as well as undocumented students — two populations that she said have been disproportionately affected by the pandemic.

She raised Forward Maryland’s idea to create these two positions again when asked how her party would promote diversity and inclusive efforts.

“We can’t have diversity as an empty promise anymore,” she said. “And that’s what I’ve seen SGA do. And that’s how I feel as an Asian Muslim woman on this campus. We need to do better, and we need to be held accountable in this next year.”

Rekhtman, though, questioned the ability of a liaison to sufficiently cover the concerns of all members of a certain community. Instead, he said, ImpactUMD will work to reach these communities in other ways — including through the finance process. He proposed adding a question to the finance application about how the SGA could improve.

The chief financial officer candidates also clashed over their strikingly different backgrounds. While Zambelli currently serves on the finance committee, Simran Chertara, ImpactUMD’s candidate, only has experience with the committee through her past efforts to get a club budget approved.

Throughout the debate, Zambelli argued that his experience with the funding process has well prepared him to take over as chief financial officer, casting doubt on Chertara’s ability to do the same. Chertara, on the other hand, accused Zambelli of undermining the competence of students who haven’t served on the SGA. She asserted she could bring a new perspective to the finance committee.

Still, both sets of candidates expressed pride in the campaigns their parties have run, stating at multiple points throughout the debate that they have not only “talked the talk” but also “walked the walk” in terms of advocating for students and working to make a difference on campus.

Students can begin casting ballots in the race on Wednesday and continue to do so until voting closes on Friday.