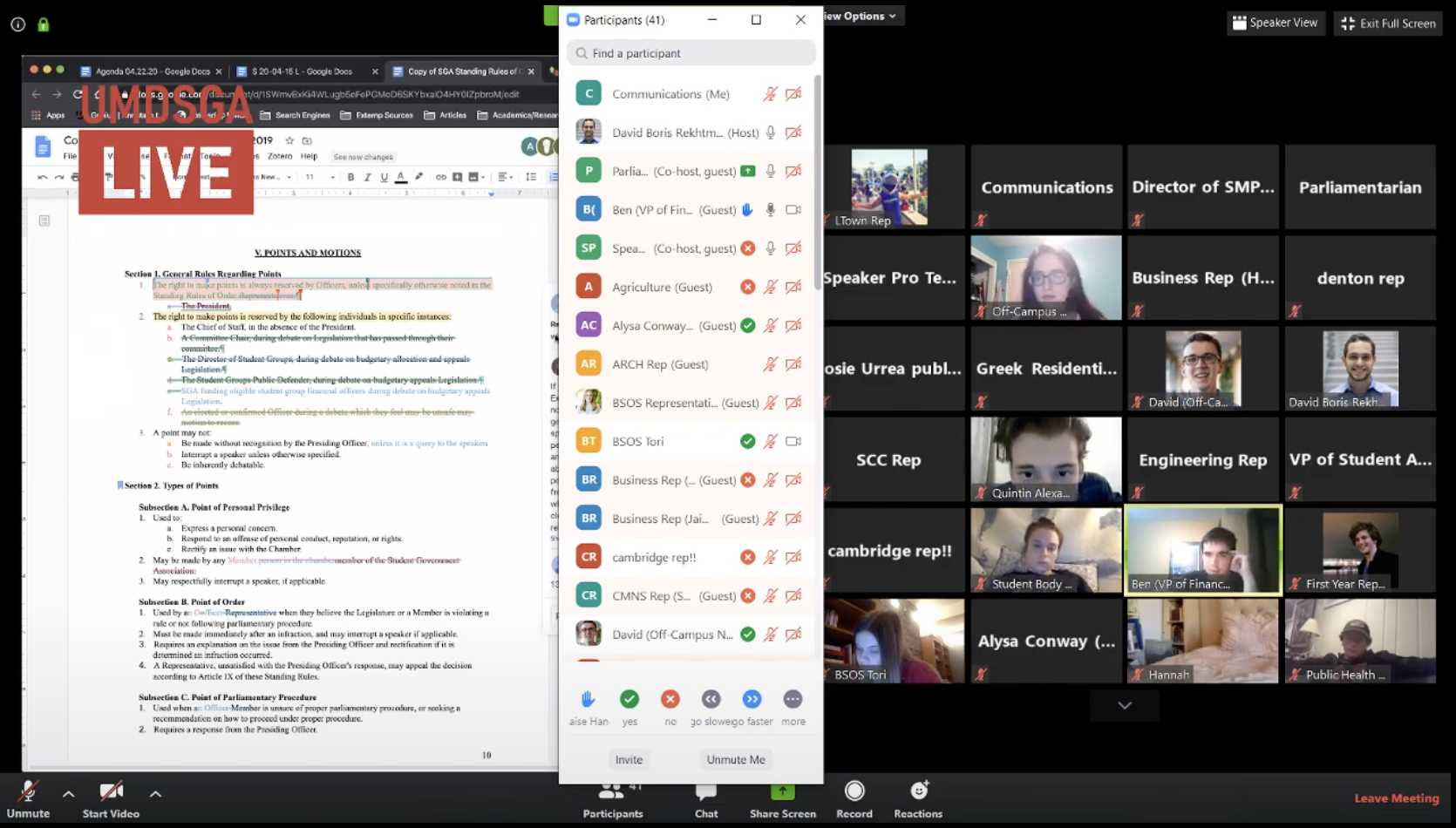 The University of Maryland's SGA met over Zoom on April 22, 2020. (Rachel Hunt/For The Diamondback)

The University of Maryland’s SGA passed 11 bills Wednesday, including one approving the establishment of a Latinx/Hispanic caucus as well as a measure urging administration to provide relief to families of employees who die as a result of COVID-19.

Within the first hour of the meeting, legislators went into two executive sessions closed to the public. Legislators also decided they would not be proceeding with the impeachment of David Rekhtman, the speaker of the legislature, according to speaker pro tempore Kislay Parashar.

The decision came after the Committee on Accountability and Ethics recommended to not move forward. But anyone can make a motion at any time, Parashar said.

“So we don’t know what is going to happen,” the sophomore computer engineering major said.

The almost nine-hour meeting comes in the middle of the Student Government Association elections, as competing parties Forward Maryland and ImpactUMD wait for the voting period to end on Friday.

Wednesday’s meeting also marked the second-to-last meeting of the year. The final meeting — the annual “omnibus” — will be the last opportunity for the SGA to pass legislation before the session ends. April 12 was the last chance to submit bills in order to meet the one-bill-per-semester requirement, Parashar said.

“It usually stacks up exponentially towards the end of the year, so that the members could say that they have met the requirements and done something,” said Jinwook Hwang, the body’s communications director. “That’s why we saw 11 bills discussed just in a single day.”

Josie Urrea, the public policy representative for the SGA, sponsored the act establishing a formal Latinx/Hispanic caucus, which passed 32-1, with one abstention.

The black caucus is currently the only cultural caucus in the SGA, Urrea said, and it should not be dealing with matters that concern Latinx communities. Each community has specific issues, which may not apply to others, she said.

This legislation doesn’t prevent SGA members who don’t identify as part of the community from joining, though, stating that the caucus will be “pluralistic.”

Now, Urrea is working with officers and legislators to reach out to Latinx organizations on campus. Although the caucus will not currently be able to meet in person due to COVID-19, Urrea wants to get a head start so the caucus can begin early next year.

Another bill, sponsored by Denton representative Josie Shaffer, urged U.S. Education Secretary Betsy DeVos to withhold the final changes to the Title IX guidelines until in-person classes resume, so that students, faculty and staff can focus on the transition to online education. The bill passed 33-0, with one abstention.

“A lot of things are up in the air in terms of university administrations,” said Shaffer, a sophomore government and politics major. “For Betsy DeVos [to] potentially release these ultimate rules about sexual misconduct and have universities enforce it right away, is just another added stress that students don’t deserve.”

Elena LeVan, the sexual misconduct prevention director, was also involved with this legislation.

Second-to-last on the table was a bill approving the SGA’s move to urge this university to provide relief to families of employees who die from COVID-19, which passed 32-0 with one abstention.

Sarah Ronayne, the representative for the behavioral and social sciences college and the bill’s sponsor, said the university has promised to pay dining and residential facilities employees through the spring semester. But, she realized, there are no details about what the university would do to help families of employees that die.

“It’s urging the university to take action and make sure that our community is supported and the family members of our employees are supported,” the sophomore government and politics major said.

The body also spent about seven hours discussing a tabled bill from the previous week’s agenda that amended the body’s standing rule of order and examined “archaic and noninclusive” pronoun language in SGA governing documents.

The group was still seeing amendments added on language specifications in the early morning. At about 2:45 a.m., the bill passed 18-3, with four abstentions.