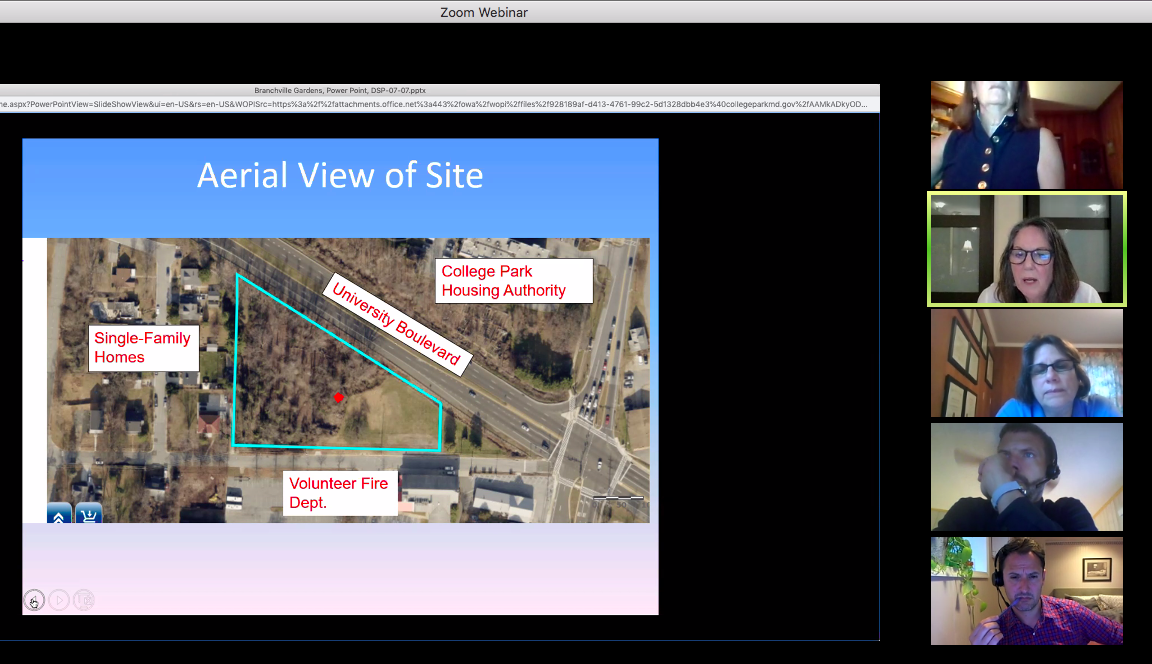 The College Park City Council discussed a detailed site plan for an affordable housing project that has been at a standstill for decades during a Zoom meeting Tuesday night.

It’s been 33 years since Cruz Development Corporation filed the project’s preliminary plans with the city. As for why the project has taken so long to be completed, College Park city planning director Terry Schum said the Boston-based developers and the property owners may have put it on the back burner in favor of other priorities over the years.

At the meeting, District 2 Councilman P.J. Brennan expressed excitement about the project, adding that affordable housing in the city was a “much-needed product.”

If given the green light, developers plan to construct the building on Branchville Road, near the Branchville Volunteer Fire Department’s headquarters. The property is planned to include a seven-story building with 81 units and 130 parking spaces, said College Park senior planner Miriam Bader.

At its meeting next week, the council will either approve or reject the site plan. The Prince George’s County Planning Board will then have the final say on the site plan’s fate on July 23.

The plan the developer presented on Tuesday didn’t meet the city’s requirements for lighting, green area, public spaces and site and streetscape amenities. However, Schum said the company and city staff have been discussing ways for Cruz Development to meet them.

Since constructing the development will mean razing 1.06 acres of woodland, the council is also requiring Cruz Development to replant that same amount offsite, along with the trees the company will be required to plant to offer tree canopy coverage on the property.

At the meeting, Brennan expressed hope that the council could incentivize Cruz Development, as well as future developers in the city, to plant trees on private properties.

“Any creative ways we can figure out how to keep the trees within our city or the surrounding watershed, I think, is an important goal for this council,” Brennan said.

Additionally, District 1 Councilman Fazlul Kabir expressed concerns about how the developer’s plans have changed, regarding the construction of a loop that would allow Branchville fire trucks to turn in and out of the nearby station.

Back in 1988, the company would have been required to build this loop, but the conditions its plans must meet before approval have since changed. City staff, along with the city engineer, went out to analyze the area and determined that based on measurements and drawing, the given space was adequate for fire trucks to maneuver in and out of.

However, Kabir wondered what the fire department thought about the matter. He said the department’s vehicles have already sustained damage when turning in and out of the station because of the area’s quality. Currently, the department only has a gravel path to go out onto Branchville Road.

“I’m worried that actually going over that gravel space could be causing a problem to the vehicles that turn in and out,” Kabir said.

Cruz Development Corporation’s attorney Dan Lynch explained that the company changed its plans because it worried adding a new feature to the area would interfere with the fire department’s ability to move in and out of its garages.

“One of the concerns we had all along is doing anything that would impact the fire department’s operations,” Lynch said.

Schum said city staff were providing their best recommended solution and would continue to work with the fire department to accommodate its needs, as well as the needs of property owners.

“It’s not the perfect situation, but it’s an existing condition we’re trying to make the best of,” Schum said.