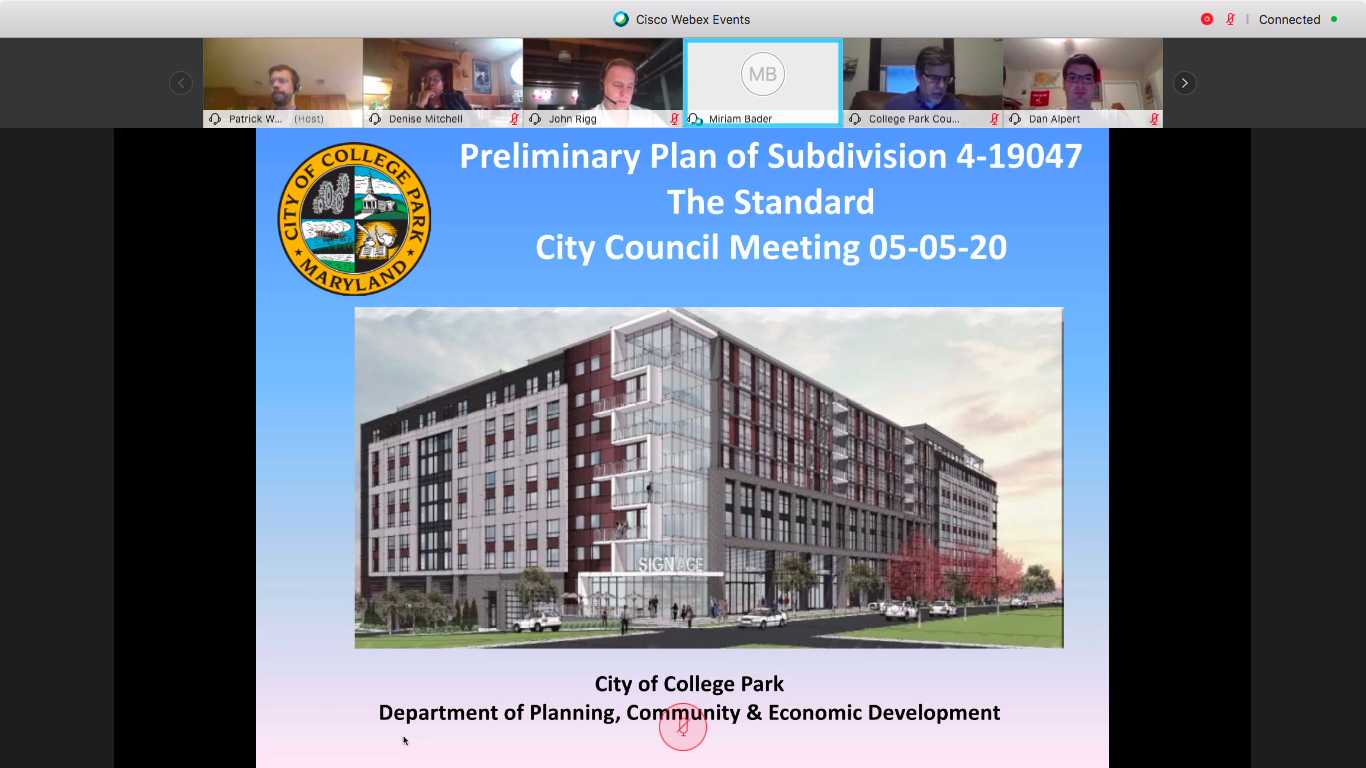 The College Park City Council discusses preliminary site plans for The Standard, a new student housing development on Hartwick Road, on May 5, 2020. (Clara Niel/For The Diamondback)

The College Park City Council homed in on questions that still need to be answered about site plans for an apartment complex on Hartwick Road at a work session Tuesday night.

According to the meeting’s agenda, the project — called “The Standard” — is set to feature 283 apartment units, 6,000 square feet of retail space and a 248-space parking garage. The building, which is being developed by Landmark Properties, is projected to be nine to 10 stories, with study rooms on each floor and amenities such as a pool table, sauna and fitness rooms.

Protecting the environment and the city’s greenery were hot topics during the work session. District 2 Councilman P.J. Brennan raised concerns that the project doesn’t meet the tree canopy requirements Prince George’s County has in place for developers who propose disturbing 5,000 square feet of land or more.

These requirements exist to offset the effect of development on the environment. According to the U.S. Agriculture Department, tree canopies have many benefits in urban settings: They reduce summer peak temperatures and air pollution, bolster wildlife habitats and increase property value, among other things.

Landmark Properties is required to provide 8,059 square feet of tree canopy but, due to site constraints, the development will only be able to cover 5,030 square feet. However, Miriam Bader, city senior planner, said the developer is requesting a partial waiver of these requirements for The Standard, since it is still doing significant planting.

For Brennan, along with others, the inability to meet canopy requirements raised concerns.

“I think we’re all fairly sensitive about our tree canopy and not meeting those requirements,” he said.

But Eric Leath, a Landmark Properties spokesperson, worked to alleviate some of these concerns. Although only trees planted on the site are counted within the tree canopy requirement, Leath said the developer will also plant trees by nearby streets, which will make up for the 3,029 square feet of missing canopy.

Landmark Properties also requested to change the green certification of the building from the required LEED Silver to NGBS Bronze. Both are systems used to rate buildings based on how well they meet certain sustainability standards, but LEED is one of the most well-known systems while the National Green Building Standard is a lesser-known system that is gaining traction.

Chris Hatcher, who identified himself as Leath’s legal representative, said that the site’s rating could advance to NGBS Silver — it would require some changes and cost an ample amount of more money. Either way, Hatcher said, Landmark Properties plans to move forward to satisfy the requirements for NGBS Silver.

But some council members expressed reluctance to switch to another green ranking system without more information. City staff said they would be open to changing to another certification program, so long as Landmark Properties can provide evidence that the different rating would be equivalent to LEED Silver.

Brennan suggested having an unbiased third party weigh in on what the best rating system for this project could be. District 3 Councilman Robert Day pitched the use of a matrix to compare the two rating systems and better understand their differences.

College Park Mayor Patrick Wojahn said he looks forward to seeing a comparison of the two rating systems. He added that some questions remain regarding how best to preserve the tree canopy.

“I think we have a couple of issues that we still need to work out,” he said.

The Prince George’s County Planning Board is set to discuss the detailed site plans on June 24.