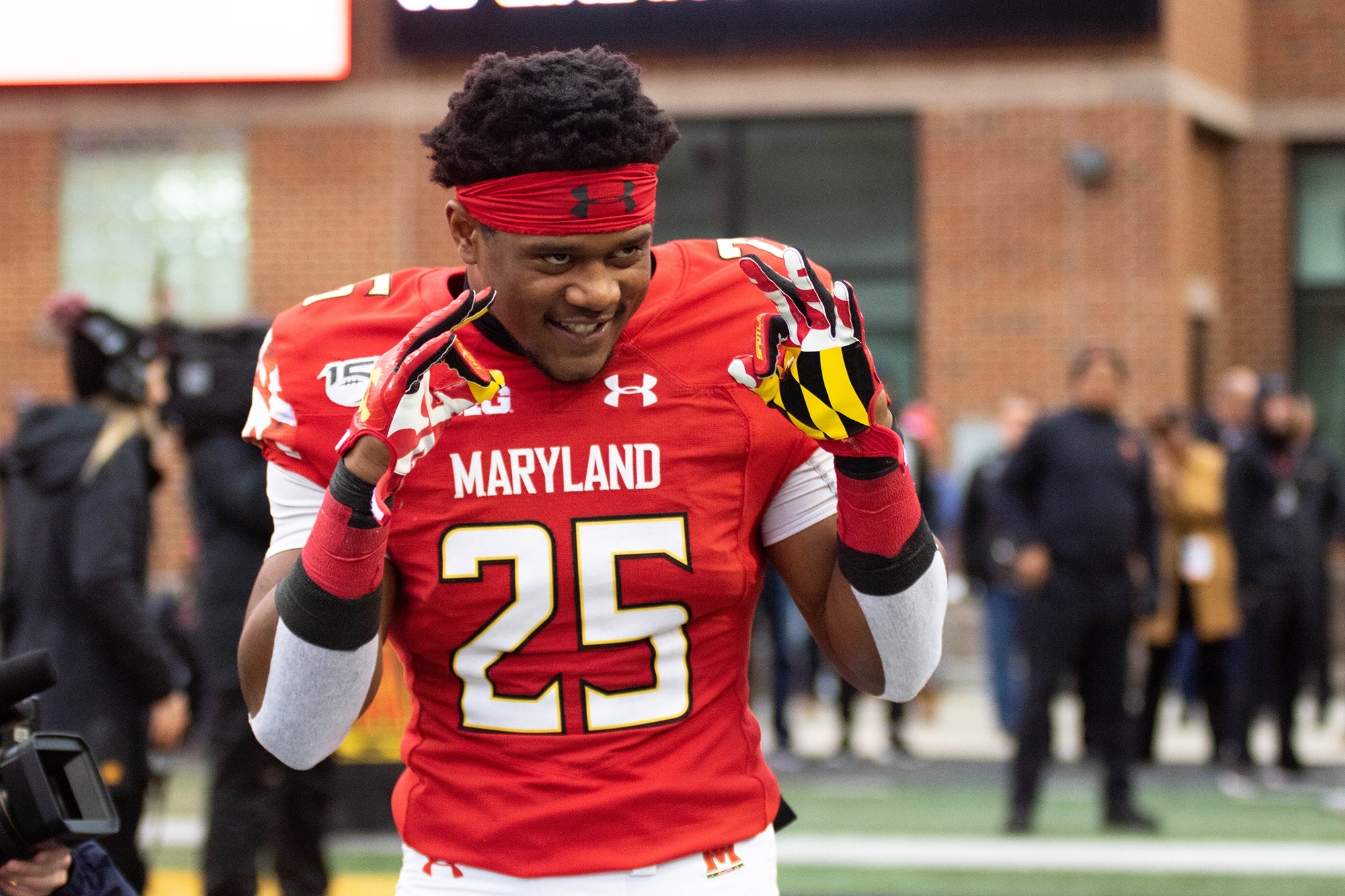 Safety Antoine Brooks before Maryland football's 38-7 loss to No. 14 Michigan at Capital One Field on Nov. 2, 2019. (Julia Nikhinson/The Diamondback)

In 2015, former Maryland safety Antoine Brooks was sitting in a hospital recovering from a gruesome ankle and wrist injury that led him to question whether he’d ever play football again. A star quarterback and defensive back at DuVal High School with multiple Division I offers, Brooks’ burgeoning career looked in jeopardy. Playing again seemed more like a dream than a reality.

Yet five years later, the All-Big Ten talent is headed to the NFL. The Pittsburgh Steelers selected Brooks in the sixth round on Saturday, making him the second Terp off the board. Running back Anthony McFarland was chosen in the fourth round, also by Pittsburgh.

Over his four years in College Park, Brooks garnered two All-Big Ten nods while serving as a steady presence in Maryland’s defense. He established himself as one of the best tacklers in the Big Ten, leading the conference with 5.8 solo tackles per game in 2019.

While he seldom made big plays, Brooks was always available to do the dirty work for the Terps’ defense while playing multiple positions. That versatility could help the Lanham native with the Steelers.

Brooks enjoyed a glittering high school career at DuVal, being named Prince George’s 4A Offensive Player of the Year in 2015 and garnering All-Met honors twice. However, his career-threatening injury slowed the momentum, and he came to Maryland as a relatively unheralded two-star recruit.

Brooks swiftly reinvented himself as a defensive back, and after playing sparingly his freshman campaign, he enjoyed a breakout season in 2017. Brooks started 11 games at linebacker and led Big Ten defensive backs with 9.5 tackles for loss. He improved from there, switching to safety for his junior campaign and continuing to excel as a tackler.

Perhaps his biggest moment in a Maryland jersey came in the fourth quarter against No. 23 Texas in 2018. With just over a minute remaining and the Terps up by five, Longhorns quarterback Sam Elingher slightly overthrew his targeted receiver. Brooks was on hand to leap and snag the pass, icing the game and securing a 34-29 upset. It was the perfect culmination to Brooks’ best game to date as a Terp — one in which he tallied 11 tackles.

While he faded slightly down the stretch of his junior year, Brooks rediscovered his form for the 2019 season. He made 13 tackles against Temple and recovered a fumble that kept the Terps in the game. Brooks also continued to be a menace against the run game, posting 8.5 tackles for loss on the season.

In 2015, Brooks’ football career could well have been over. Battered by a devastating injury, even the college game seemed to be devolving into a pipe dream. Yet he reinvented himself and became one of the best tacklers in the Big Ten, and he now has the chance to show that versatility at the next stage.

“He doesn’t do it with a whole bunch of talk, and he’s not a guy that stands up in meetings,” Locksley said. “But he plays hurt, he plays reckless with his body. He’s banged up after every game.”