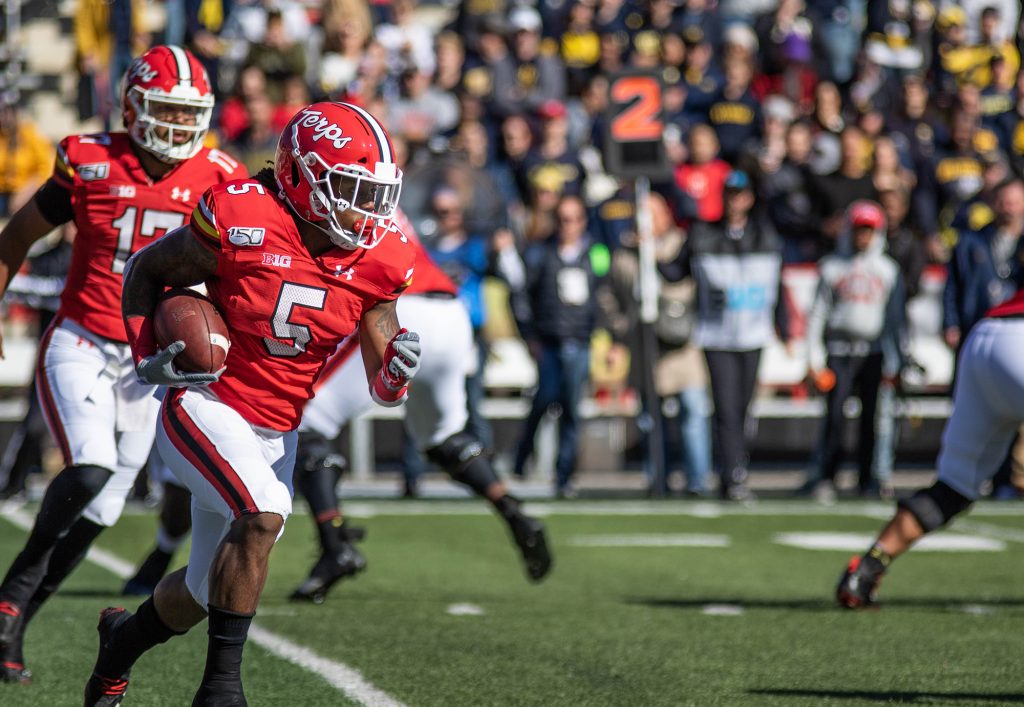 Running back Anthony McFarland rushes the ball during Maryland football's 38-7 loss to No. 14 Michigan at Capital One Field on Nov. 2, 2019. (Julia Nikhinson/The Diamondback)

For so much of Anthony McFarland’s college career, he had to wait to make it to the big stage. Injuries, poor team displays, coaching changes — McFarland was often a victim of circumstance, collateral damage in a whirlwind three-year period for Maryland football.

But now, after being drafted by the Pittsburgh Steelers in the fourth round of the 2020 NFL Draft, McFarland has finally arrived in the spotlight.

A four-star recruit from nearby DeMatha High School, McFarland dazzled with the Stags, climbing to the top of recruiting rankings after racking up 1,124 yards on the ground in his sophomore year and adding 12 total touchdowns as a junior.

Then, he broke his fibula, spelling an end to his high school career before he had the chance to step onto the field for his final campaign.

Still, McFarland persisted. And despite interest from national powerhouses Alabama, Clemson and Penn State, among others, McFarland chose the Terps, just two years removed from a 3-9 record.

He redshirted his first season, getting a front-row seat as Maryland limped to a 4-8 record.

Then 2018 happened. Jordan McNair’s death sparked an investigation into the Terps’ culture, culminating in Durkin’s dismissal — shortly after being reinstated by the Board of Regents. Maryland’s on-field woes continued, as the Terps stumbled to a 5-7 record. But McFarland was one of the few bright spots. He starred in his freshman campaign, posting 1,034 yards and four touchdowns.

Just one week later, McFarland thrust himself into Maryland lore when No. 9 Ohio State came to town.

It started on the second play from scrimmage. First, McFarland saw a gap emerge. Then, green grass. And as he scampered toward the end zone, some 81 yards away from where he first started, McFarland’s talent level became all the more pronounced.

[Read more: As coronavirus spreads, Maryland looks ahead to an uncertain future for football season]

Then, about five minutes later, he did it again. The sprint was slightly less strenuous — 75 yards this time around. But there was McFarland, arms outstretched, basking in adulation from the stunned Maryland faithful once more.

His 21-carry, 298-yard showing wasn’t enough for Matt Canada’s squad that day, as the Terps eventually fell 52-51 in overtime. But McFarland had established himself as one of the nation’s best backs, a fact not lost on new coach Mike Locksley.

“I’m glad he decided to come here and he was here waiting when I took over,” Locksley said earlier in the season. “He’s a dynamic special player and talent who works really hard and I think he’s really earned the respect of his teammates with how tough he is.”

McFarland wasn’t quite able to match his freshman performances in 2019, rushing for 614 yards while splitting time with Javon Leake. Injury woes hampered his success, with a high ankle sprain forcing him to cede snaps.

But, he scored eight touchdowns. And, there were still bright displays. A three-touchdown showing in Maryland’s 63-20 shellacking of then-No. 21 Syracuse on Sept. 7. An eight-carry, 134-yard outing in McFarland’s last game of his career, a 19-16 defeat to Michigan State on Nov. 30. And a fourth and one punch into the end zone, after breaking two tackles, against Temple showed glimpses of his versatility.

Now, McFarland turns his attention to the NFL. It will be a far more challenging test than his previous one.

But after carrying much of the load for Maryland football over the past two seasons, McFarland has higher hopes — to become the latest Terp alum to strut their stuff in the big leagues.