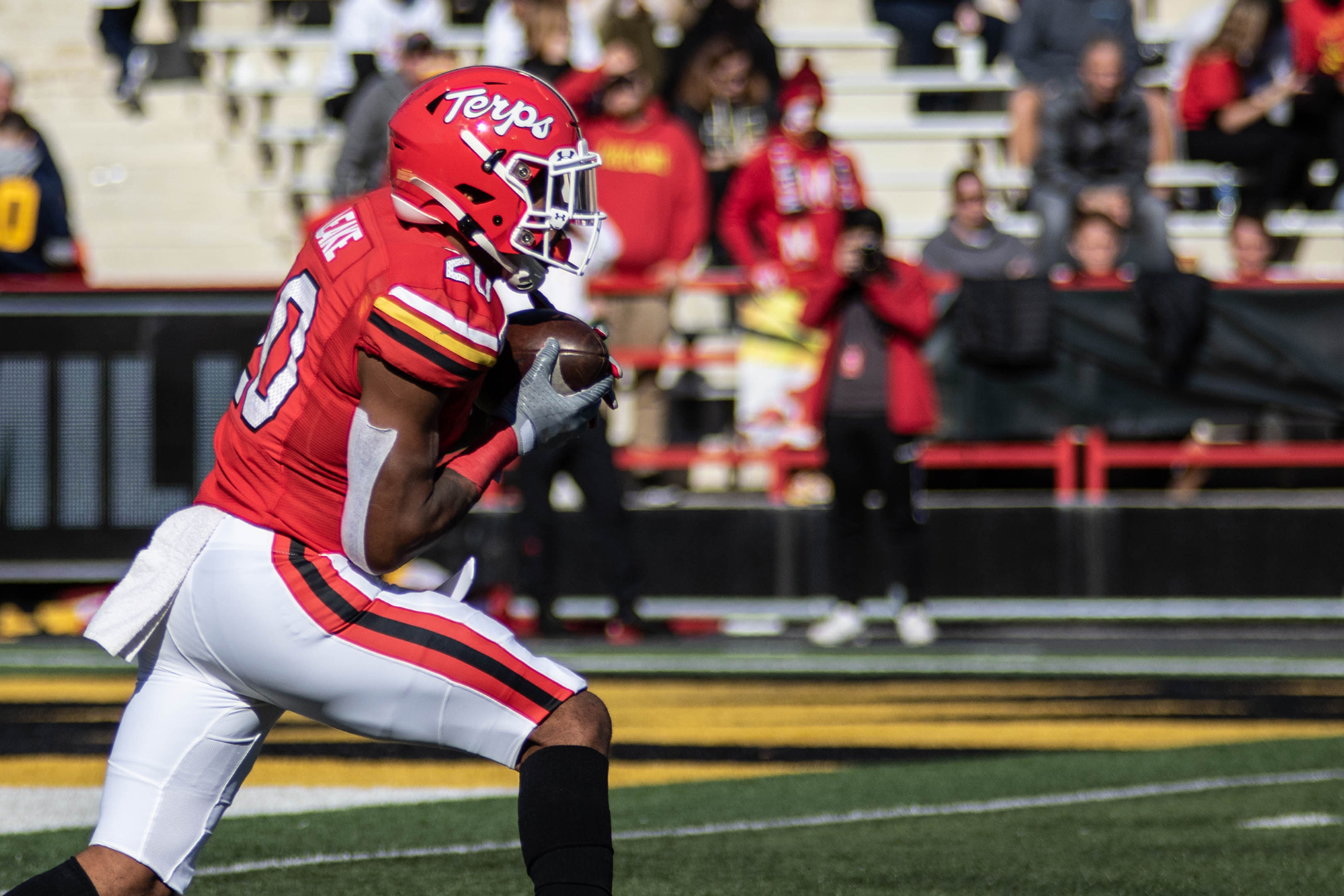 Running back Javon Leake rushes during Maryland football's 38-7 loss to No. 14 Michigan at Capital One Field on Nov. 2, 2019. (Julia Nikhinson/The Diamondback)

When Javon Leake arrived in College Park in 2017, he was relatively unknown on the national stage.

He had been to a state title game. He had racked up accolades — a 2016 American Family Insurance/USA Today All-USA North Carolina first-team nod, two appearances on the Greensboro News & Record HSXtra first-team All-Area.

Still, as a three-star recruit, dreams of playing in the NFL seemed fanciful at best.

But three years later, Leake is there, expected to be signed by the New York Giants after going undrafted, ESPN’s Jordan Raanan reported Saturday night.

Leake impressed while at Page High School, rolling through Class 4A to the tune of 2,048 yards and 30 touchdowns as a junior. He followed that up with a “modest” 1,679 yards rushing in an injury-hampered senior campaign, drawing interest from schools across the country — Louisville, Virginia Tech and South Carolina, among others.

Leake chose Maryland, though. And when he arrived, he was greeted by a logjam at running back. With Ty Johnson, Lorenzo Harrison and Jake Funk all vying for minutes, Leake struggled to get on the field, tallying nine carries for 99 yards in his freshman campaign. Despite the small sample size, though, Leake made an impact — two of his carries ended in touchdowns.

After gaining a more prominent role in the offense during his sophomore season, Leake emerged as a goal-line threat. Despite receiving only 34 opportunities to run the ball, Leake led the Terps in rushing touchdowns with seven.

But, for all his talents on the ground, it was on special teams where Leake starred. He added a return touchdown — a 97-yard scamper against Illinois — and averaged over 24 yards per return as a sophomore.

With McFarland and Funk battling injuries, Leake saw his role expand in 2019. Soon, he became a key cog in coach Mike Locksley’s offense as a junior — all while retaining his role as kick return specialist.

Meanwhile, on special teams, Leake solidified his status as one of the nation’s best returners, racking up a conference-best 804 return yards and posting two touchdowns en route a first-team All-Big Ten appearance as a returner, while also being named Rodgers-Dwight Big Ten Return Specialist of the Year.

Leake finished his career with 1,487 return yards, good for fifth in program history. His three return touchdowns are tied for first.

“Javon is a big time playmaker who has the ability to hit the home run,” Locksley said on Oct. 19. “He does everything we ask of him.”

Now, Leake is being asked to do more: compete with the NFL’s best.

Not bad for an unknown playmaker out of Greensboro.