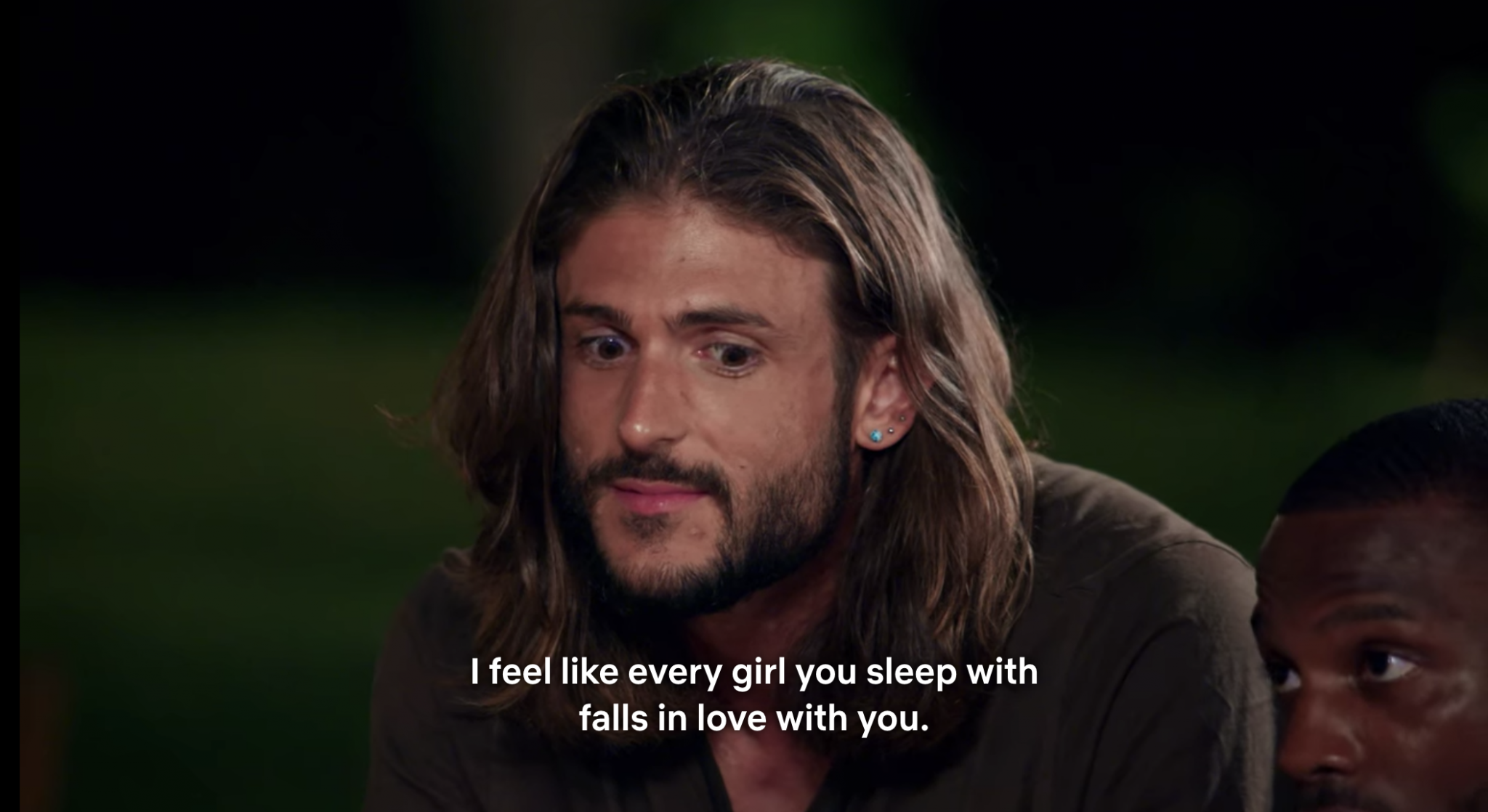 Assumptions run high as contestants get to know each other. (Photo via Netflix)

On Too Hot to Handle, Netflix gives us a voyeristic peek into a group of oversexed individuals confronted with the unthinkable: no kissing and no sex, all in the pursuit of a cash prize.

Honestly, Netflix couldn’t have chosen a better time to release the show than in the middle of mass social distancing — when you can swipe through any zip code you like on Tinder, but you’re also not really allowed to leave your house. As they say, life imitates art, and in this reality series we get to watch people work out our frustrations for us.

Most of these love-themed shows deal with producer interference and unconventional challenges, but almost always with a final goal in mind — establishing a true connection. Too Hot to Handle has entered the realm of reality television with something different. They’ve taken a rehabilitative approach with these “serial swipers.”

While I’ve been comparing the experience of this past month to more apocalyptic movies and shows, it’s nice to see more direct similarities in reality TV. And, just like real life, there are people having a hard time coping with social distancing.

Any time the contestants succumb to a kiss or sex, money is taken out of the $100,000 prize fund. So when new couple Harry and Francesca decide to ignore the rules and lock lips, the others are not very pleased. Rightfully so! Others were abstaining from activities they enjoyed only to find people blatantly disregarding the social expectations. Sound familiar?

Besides partaking in ridiculous antics and resisting the temptation to hook up, the cast members are also on a journey to develop something real. They participate in a series of self-healing workshops. Some are a bit archaic and separate the contestants by gender. One males-only exercise was led by a self-proclaimed “heart warrior” who wanted them to draw their insecurities on posters. The men ended the workshop by running full speed at their posters and launching a spear through them.

I didn’t really buy into these workshops or their intentions — they mostly just felt like shallow plot devices to get through the episodes. In the aforementioned exercise, one contestant expressed his vulnerabilities by simply writing “FEAR.” Despite this immense bravery, I couldn’t help but wonder if that was truly the deepest he could dig. From what I witnessed, the cast seemed pleased with these exercises and themselves. I guess they always have more personal time to explore these feelings further.

To keep up with the 2020 techno-hellscape theme, the show’s host is a smart home speaker. Move over Alexa, because Lana is here to keep these lustful 20-somethings in line. We’ve moved on from the classic question of “Is my smart device listening to me?” to just accepting that those devices are a great tool to learn about the contestants you’re banning from sex.

Basically, Lana plays the omnipresent god who knows what every contestant is up to at any time. For most of the first episode, she keeps quiet and collects data about the contestants. Her speakers are placed in convenient locations all around the stereotypical beachfront villa — no one can pull a fast one on Lana. Most of the shots we get are from fixed cameras that capture everything. The filming techniques reminded me of the camera setup in Big Brother. The lack of interaction between contestants and an actual human host, however, make it feel more like a social experiment.

I prefer this format. It provides me with an uninterrupted view of these boisterous guests. The only slice of awareness comes from Desiree, a narrator who never directly addresses the contestants. Desiree calls out absurdity when she sees it. Without her, the show would get maddening pretty fast. While her one-liners were a little over the top at times, she humbled people whenever they said something foolish.

In the first episode, British contestant Chloe summed it up perfectly when she surmised that everyone was “proper sexual.” Based on their gutwrenching reactions to Lana’s sex ban, I’d say Chloe has it right. Too Hot to Handle is a strong addition to love-themed reality shows, and I’d be down to watch a second season to see if the next set of contestants can lose less money for their sexual infractions.