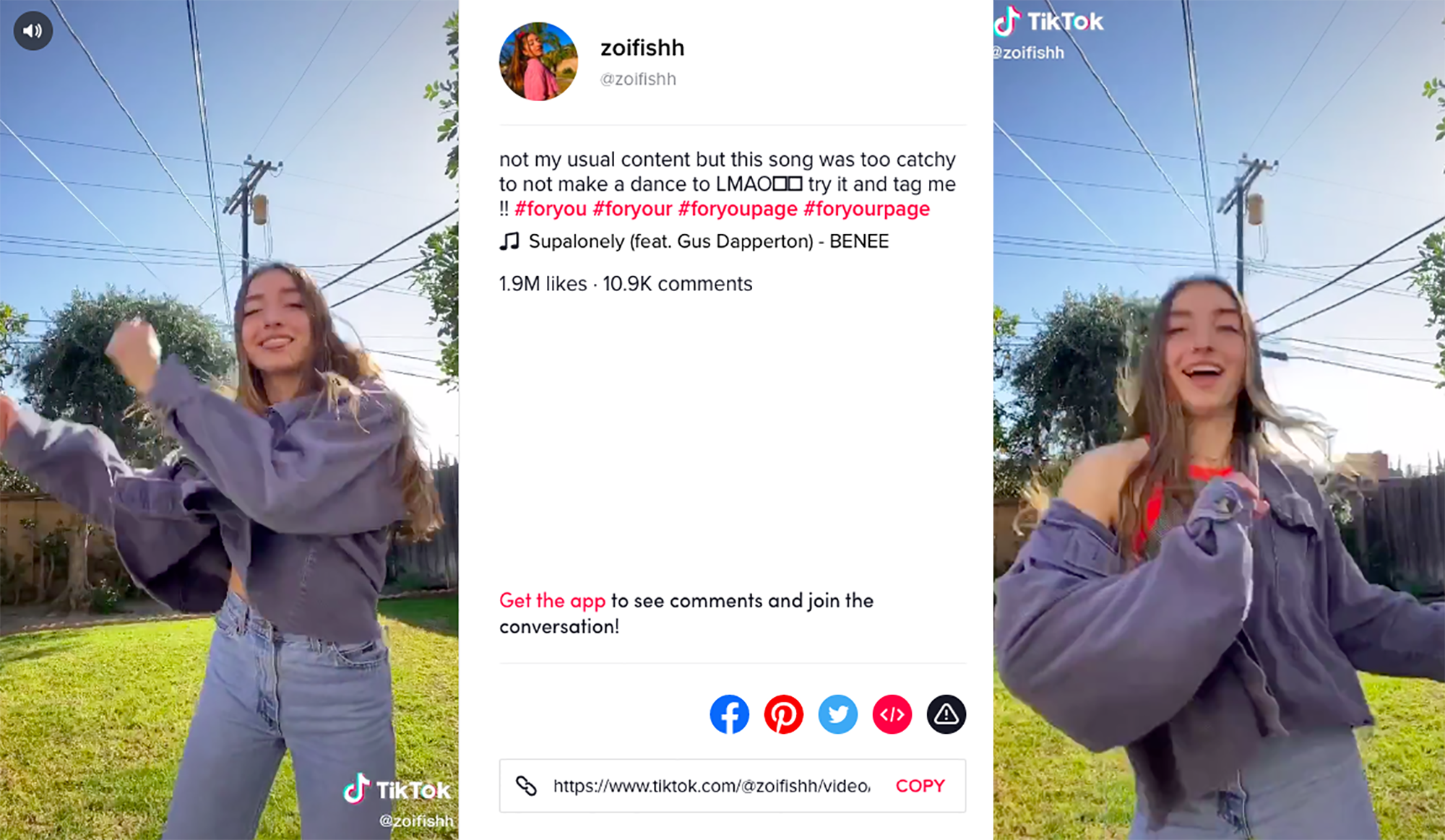 The creator of the dance "Supalonely" dance demonstrates her choreography. (Photo via TikTok)

Perpetual free time is my new enemy. As we’re confined in our homes during this pandemic, I’ve run out of ways to avoid “rise and grind” culture. The more I think about how much I could get done at the moment, the less I usually accomplish. Why clean my house or bake banana bread when I can scroll through TikTok in a cloud of existential dread?

Surprisingly, I offer TikTok as more of a solution to my lack of productivity rather than a way to waste time. In a typical scrolling session, I come across a decent amount of dance videos. Most of these dances emerged from viral trends, are backed by a Top 40 hit and last about 10 to 20 seconds.

I think these dances are more than just a trend today’s kids are getting into. Attempting to learn them is ideal for the mind, body and spirit. You don’t even realize you’re getting some form of exercise because you’re too busy learning how to hit the woah correctly. Sure, it’s no hardcore pilates workout, but it’s something.

You can’t deny the sheer pride of finally mastering a dance to a Doja Cat song after a sweaty, hour-long practice. When larger tasks seem too daunting, TikTok dances can give you a quick sense of accomplishment.

For everyone (including me) who feels too old to be on the platform: You should start out slow. Once you’ve learned a couple of dances, you’ll realize that a lot of them come from the same stockpile of roughly ten moves. Here are some TikTok dances — ranked by difficulty — to get you started and boost your spirits.

@yodelinghaleymy dance has been all over my fyp omg that’s so swag and THANK YOU for 300k that’s insanely swag!! AAH♥️♥️♬ Say So – Doja Cat

With just a couple of clean-cut, stylized moves, Haley Sharpe had a viral hit on her hands. She even made it into the official music video. This is an excellent first dance for TikTok novices — you need to start off your journey with some confidence. It’s a bit shorter than the others on this list, and the minimal moves allow you to experiment with whatever amount of attitude and expression you see fit.

A harsh reality of many of these dances is the lack of credit given to choreographers. In an earlier video of her dance to “Out West,” Nicole Bloomgarden calls on some big TikTok names to give her the credit she deserves. I was originally going to rank this dance as easy, but I quickly learned that Bloomgarden’s choreography is more complex than the dance other users are passing around. As more people post their takes on a dance trend, it’s natural for the moves to be altered a bit, but the watered-down version of “Out West” cuts out a majority of Bloomgarden’s original dance.

Credit should always be given to the creator of a dance, especially if you have a massive following. For something a little more nuanced than the viral version, try learning the original. The tempo is still slow enough to get into the hang of things. Plus, you’ll get more practice of hitting the woah.

I felt like I unlocked some secret TikTok code when I finally mastered the “Renegade” dance. The trend was everywhere, which made it especially disheartening to learn that it had just been simplified and taken from another app.

Jalaiah Harmon, creator of the “original Renegade,” was another victim of missing choreographer credit. Luckily, Harmon eventually received credit, which felt like a turning point. Two famous TikTok dancers, Charli D’Amelio and Addison Easterling, even posted videos dancing with Harmon to her original choreography. Now, I see a lot of TikTokers shouting out the users who started these dances in their captions. Maybe it’s just to protect themselves from a scandal, but it’s a sure sign of a changing culture.

The stolen, diluted version of the “Renegade” dance is ranked at medium. The original version is harder, so I’d suggest starting with the modified one and working your way toward Harmon’s choreography.

Nothing can bridge the divide between Millennials and Generation Z like a TikTok dance to a Kesha song. The moves aren’t as hard to master as the cutthroat energy you must deliver. A blood-thirsty Kesha sings about wanting someone’s liver on a platter — you better serve us some ferocity.

When her album Cannibal came out in 2010, I was just a sixth grader with an affinity for Silly Bandz. A decade later, her music carries on a whole new meaning. Imagine a timeline where people only thought of “Tik Tok” as the singer’s breakout track. Now, Kesha herself has joined in on the dance trend.

@zoifishhnot my usual content but this song was too catchy to not make a dance to LMAO???????? try it and tag me !! ##foryou ##foryour ##foryoupage ##foryourpage♬ Supalonely (feat. Gus Dapperton) – BENEE

I admit, I was pretty intimidated by Zoi Lerma’s “Supalonely” dance — the moment you can’t separate each move in your head is when you know you’re in trouble. Lerma’s creativity is to blame. She didn’t incorporate any of the classic moves you find in countless TikTok dances.

The “Supalonely” dance requires a crispness of movement that I didn’t think I could replicate. But I definitely recommend giving these harder TikTok dances an earnest try. The feeling of accomplishment after finally nailing the choreography completely distracted me from the swarm of ELMS notifications hitting my phone.

Pulling off this dance will have you saying “I’m that bitch,” just like Megan Thee Stallion in the beginning of “Savage.” This song was the soundtrack to my first week of quarantine. I hesitate to call it catchy, though. I might just have the chorus permanently stuck in my head after hearing it on a loop. Only after my 20th attempt at throwing it back did I truly relate to the lyrics — I was classy, bougie and ratchet.

For anyone born before 1996, throwing it back is a move where you body roll sideways and stick your butt out. The key is to flaunt your assets in an effortless manner. To achieve that effortless flow definitely takes some practice. If the move is too much for you, there’s the safe alternative of doing an upright body roll while holding your hands behind your head.