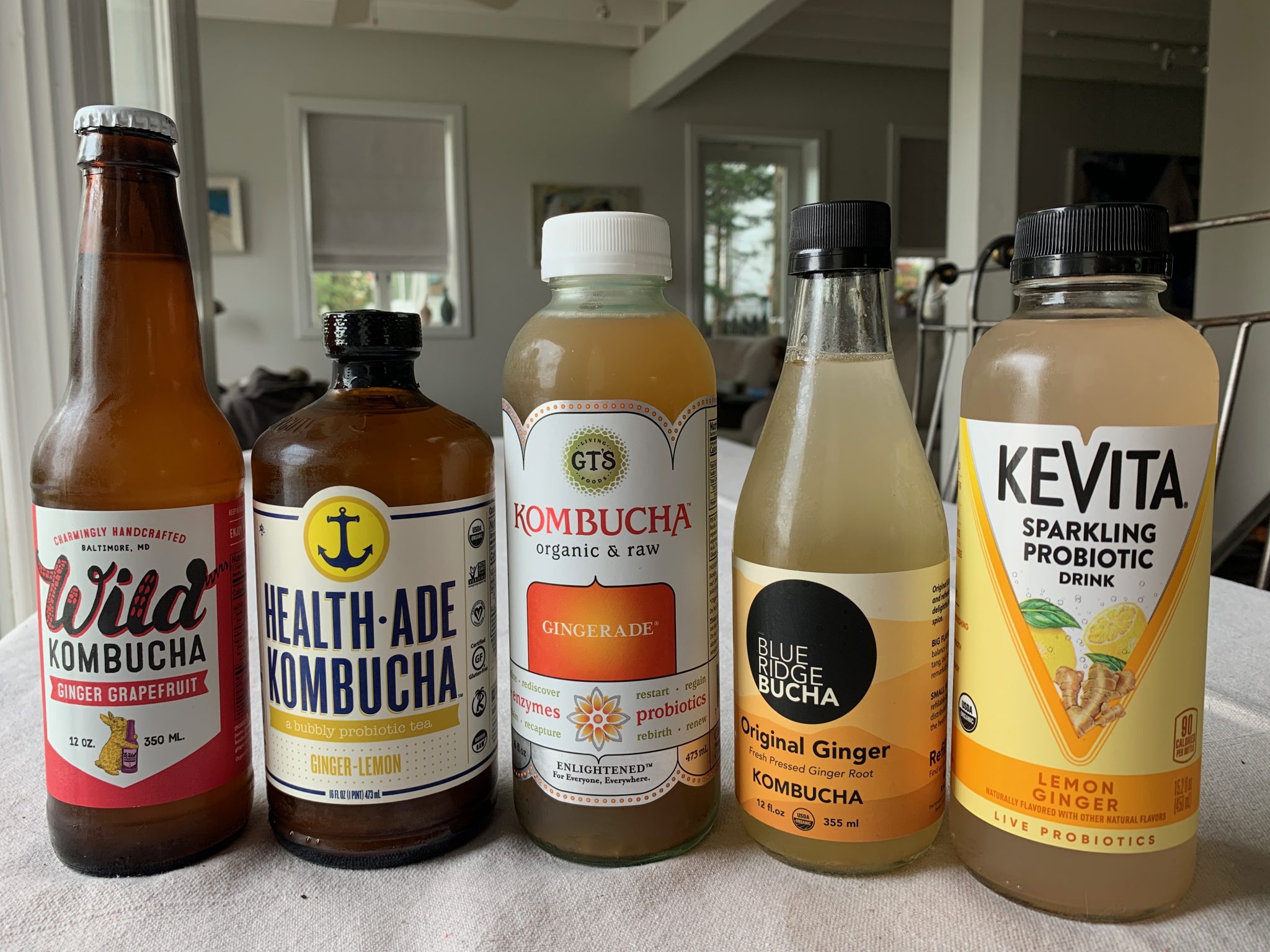 A few years ago, I visited a family friend who made their own kombucha. I will never forget my first sight of it: a mushroom-like organism floating in murky liquid. It was a bit terrifying. I didn’t understand why anyone would willingly drink it, until I learned more about kombucha and even grew to love the taste myself.

Kombucha is loaded with probiotics, which give your gut healthy bacteria, in addition to other health benefits. My father drinks it every day and swears by its soothing digestive effects. From my general polling, people seem to either love it or hate it. Most kombucha is slightly vinegary, tangy and fizzy — definitely an acquired taste.

I’ve tried a few kombucha brands before, but I wanted to conduct a blind taste test to determine which is the best. I ranked five popular brands based on taste, effervescence (fizziness), smell and flavor. For consistency, I tried each brand’s ginger (or closest to ginger) flavor.

This kombucha was my least favorite for a few reasons. First, the smell is not appealing. It smells like beer — and not in a good way. It wasn’t very fizzy at all, and kombucha needs to be fizzy. The taste of Blue Ridge Bucha was also lacking. It wasn’t tangy or sweet. It had a decent ginger flavor, but didn’t really taste like kombucha. Don’t trust a drink that smells like beer but isn’t.

Kevita markets this bottle as a “sparkling probiotic drink.” While they don’t call it kombucha, I find it similar enough to include. The drink didn’t have a noticeable smell, and it had a very light taste. There wasn’t much effervescence or classic vinegary tang. The ginger flavor was nice, but it was sweeter than the kombucha I’m used to. It had that fake sugar taste to it, similar to a Sparkling Ice. If you like the taste of that, maybe you’ll like Kevita. But as far as kombucha goes, this drink was not my favorite.

This ginger kombucha had a slight vinegary smell, but it wasn’t overpowering. There was a good amount of effervescence and a light ginger flavor. It tasted like a standard kombucha. If you’re a newbie in the world of kombucha, definitely start with GT’s Living Foods. The “gingerade” flavor is my favorite, but they have a ton of other options.

If you haven’t seen Cody Ko’s YouTube video “The Kombucha King,” you need to watch it. It’s absolutely hilarious and discusses the mind of the brand’s founder, GT Dave. Overall, GT’s makes an all-around decent kombucha.

When drawing this cup to my face, I was immediately hit with a potent ginger smell. Unsurprisingly, it had a strong ginger flavor, too. I love ginger, so this was a plus for me. There was a perfect level of effervescence, and it was more vinegary and tangy than the rest of them. This is definitely a potent drink— maybe not for new kombucha drinkers — but I really enjoyed the strong, classic kombucha taste.

My favorite out of the five was a brand I’d never tried before. Wild Kombucha had little to no smell, but a fantastic taste. There was a perfect tangy-to-sweet ratio and a good amount of effervescence. The ginger was balanced with a little bit of a fruity taste, probably because the flavor was “Ginger Grapefruit,” two of my favorite flavors. Overall, it had everything I like in a kombucha.

Wild Kombucha is a local brand, which is another plus. Mobtown Fermentation, a kombucha brewery out of Baltimore, handcrafts Wild Kombucha. They create interesting flavors like “Blueberry Yerba Mate” and “Elderberry.” It comes in cool, beer-like bottles so you can kick back and cheers to gut health.