During quarantine, Club Penguin has become more chaotic than ever 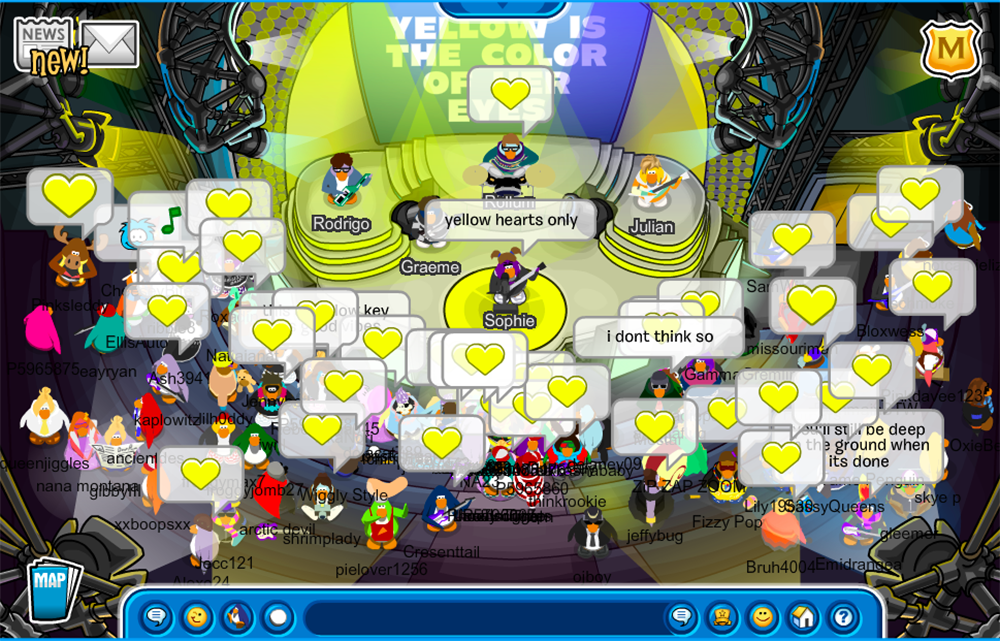 As I wither away in my childhood bedroom during lockdown, I’m filled with equal parts boredom and nostalgia — no surprise if you’ve read my column about Omegle. Fellow writers have explored the idea of regression as many young adults are forced back into routines they had happily outgrown.

As someone who spent the majority of their youth online, I find myself curious about the places I used to frequent. Revisiting these online communities, I enter with two main questions: “Have they changed at all?” and “Are other people doing the same thing as me?”

When it comes to Club Penguin, the online chatroom website that was previously shut down by parent company Disney in 2017, my intrigue was burning. I spent a large chunk of my elementary years absolutely obsessed with the website, begging my mother to allow me to use my allowance on membership cards at the local Blockbuster that had granted me premium user status.

I eventually had to set a timer every day because I would waste hours fervently playing mini games to earn coins and purchase clothing, Puffles and igloo expansions. In retrospect, it was the first experience I had with class consciousness, in terms of how superior I felt wearing the “exclusive” members-only items.

But like many online role-playing games, the main draw was the fantasy of pretending to be whoever I wanted. In real life, I was an awkward, sometimes moody kid. In the penguin world, I was a stylish, independent penguin lady who could make new friends.

So as an awkward, sometimes moody 21-year-old, I decided in my listless search for mental stimulation that I would see what was going on with the posthumous reconstruction of the site.

Club Penguin Rewritten is a fully functioning gaming site using previously saved files from the original Club Penguin website. In this version, however, there are mature servers where chats are unmonitored, and every user is automatically given member status. The free reign is where the trouble begins.

I was unaware of the existence of the unmonitored chat servers, until I decided to log on with a friend to hang out. When you are initially spawned in the main town, you are flooded with an abundance of overlapping white chat bubbles. Unsurprisingly enough, there were various bots advertising “Zoom parties” that promised sex, followed by access codes and passwords to join. Other people simply advertised parties at their respective igloos, also promising “sex and drugs” — whatever that could mean in this genital-free penguin domain.

[Read more: I was supposed to see Soccer Mommy live. Instead, I watched their concert on Club Penguin.]

And of course, like the unfortunate majority of the internet that has absorbed the malicious, mistaken culture of racism as humor, there were people yelling racial expletives and purposefully derogatory messages. My best friend who I logged on with recounted experiencing harassment when another user began targeting her for jokingly declaring her support of “Barbz for Bernie.”

This new sinister tone felt mind-blowing. I had always associated this website with a squeaky-clean standard of decorum. Sure, back in the day there were workarounds for people who wanted to talk about forbidden topics, but the majority were fearful of being struck down by the moderating overlords. Here I was, a terrified and bored college student trying to revisit a happy memory, unable to stop myself from reading the never-ending bile of internet trolls who wanted to get reactions out of others, advertise their TikToks or get someone to send them nudes on Snapchat.

In some ways, though, it feels perfectly apt to describe what so many of us are going through. Aspects of our childhood are now being inextricably fused with the dark, ugly recesses of modern culture. I mistakenly believed that by revisiting Club Penguin, I would be comforted in some capacity. But, just like experiencing this pandemic in a room that I haven’t touched in years, it has instead reminded me of how much living in the future sucks.