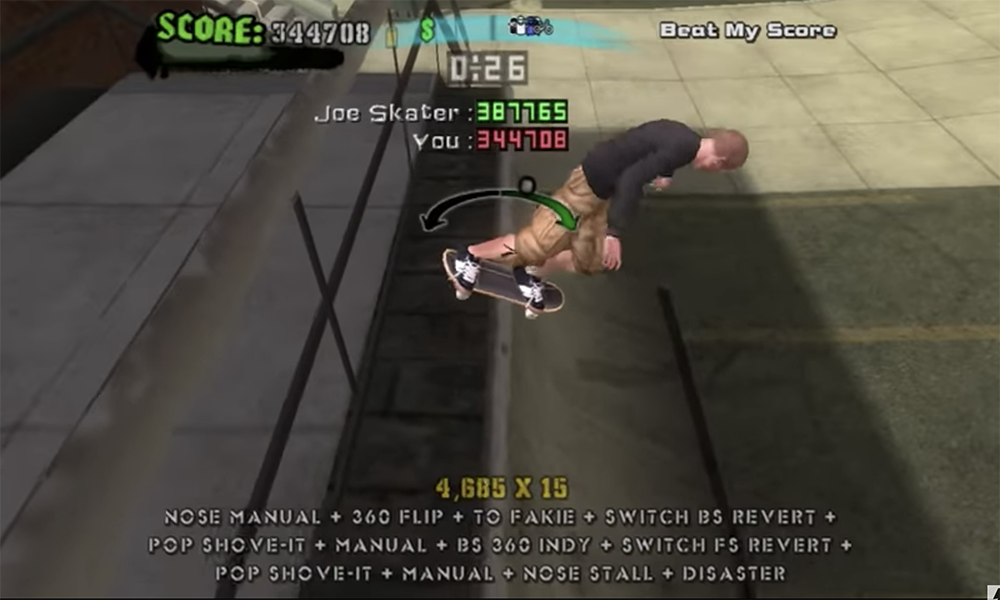 'American Wasteland,' the seventh installment of the Tony Hawk game series, came out in 2005. (Photo via YouTube)

As college kids stuck in our parents’ houses search for entertainment, many of us have turned to video games, the nation’s most productive pastime. This series of articles examines some of the best decade-old video games that students across the world may be rediscovering as they rummage through their basement closets.

Last week, I took on one of my favorite games with first-person shooters — but this week I’m switching games, and genres. From the battlefield to the skatepark we go, ready to examine two of the most memorable skateboard video games of my young life: Tony Hawk’s American Wasteland and Skate.

Throughout my 21 years, video games have allowed me to participate in activities I was mediocre at in the real world, which is probably a large part of why skateboarding games are so popular. Something as simple as an Ollie takes months of practice, but it’s pretty easy to do on a screen with a controller in your hand.

American Wasteland, the seventh installment of the Tony Hawk game series, came out in 2005 for the GameCube (the system I own it on), PS2, Xbox and Xbox 360. It’s an upgraded Tony Hawk game that still keeps the fun and easy gameplay elements that users loved. One significant improvement from past games is the career mode where players work their way up from being a nobody to running the Los Angeles skate scene and saving a legendary park. Playing it back, it’s corny at times, but still lovable.

Background music that makes sense is incredibly important to the rebellious world of skating, and American Wasteland indulges us. The soundtrack is full of punk rock anthems that made my 10-year-old self feel alive as I virtually skated away from police to avoid the incarceration of my tattooed and lime-green-mohawked character.

Two years after American Wasteland came the Electronic Arts-produced Skate, one of the first mainstream skating games to exist outside the Tony Hawk universe. EA and Skate — only available on the PS3 and Xbox 360 — entered a skateboard video game world that was essentially a one-horse race as wildly-popular Tony Hawk games were coming out year after year, but they certainly made it competitive and went on to produce sequels to the game.

The games are similar on the surface — they focus on skateboarding in Southern California and even feature some of the same pro skaters — but the controls in Skate are completely new. Instead of the simplicity of pressing one button to jump and another to do a trick, EA introduced a trick system based around flicking the joystick. While this sounds easy enough, the change takes a while to fully master.

It’s these controls that make Skate a lot more realistic, albeit more frustrating, than games like American Wasteland. There’s more challenge and nuance to it, taking away the ability to do impossible tricks like backflips down a staircase and replacing it with a world of skateboarding that more closely resembles the real one.

While it was actually pretty hard to be good at Skate, there’s plenty of enjoyment to be found in it. The physics of the game feel a lot smoother than any skateboard game to date, and users exert more control over the characters’ body movement. The game also has excellent graphics and feel, especially when you consider that it was produced over a decade ago.

Fans of the Skate games may remember “Hall of Meat,” a game mode introduced in Skate 2. But many of the same elements of the competition — where players compete to see who can create the worst injury — originated in the first installment of the series. While this sounds gruesome now, looking back, it was understandably fun for middle schoolers.

One of the best features is the option to “set a marker,” or place down a spot you want to keep starting from after you eventually wipe out, instead of having to get up and skate back to the top of the hill. And when you unlock them, you can skate as featured characters including, among others, Paul Rodriguez, Terry Kennedy and Rob Dyrdek of Fantasy Factory fame.

Skateboarding games such as American Wasteland and Skate allow us to escape into our own little action-filled universe, which isn’t such a bad thing during a time like this. For those of us with terrible real-life balance, it also allows us to excel at an activity for which there is no hope for real-life proficiency.