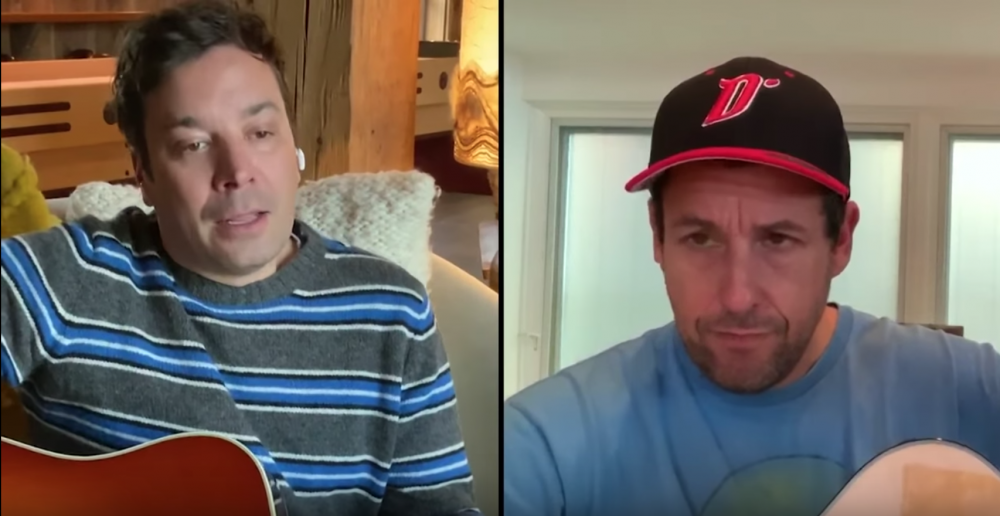 Jimmy Fallon playing guitar with Adam Sandler during his at-home version of 'The Tonight Show.' (Photo via YouTube)

Sitting in my childhood home night after night, trying to find ways to fill the endless hours, I learned something that didn’t quite sit well with me: my parents are semi-frequent watchers of The Tonight Show Starring Jimmy Fallon.

Now, let’s get a few matters of business straight here:

Okay, with all that out of the way, I must admit: Jimmy Fallon bugs me. I’d much rather be caught watching Stephen Colbert, or Seth Meyers, or Trevor Noah, or old Stephen Colbert than admit that I spent an hour with The Baron of Breaking, The Earl of Eternal Earnestness, The Lord of Low-Hanging Fruit. Like a lot of people, I find his shtick to be forced and overly-giggly. Even worse, he’s dragged awesome figures such as Steve Higgins and The Roots down with him.

Beyond the new setting and set-up, it’s important to note that nothing has really changed with The Tonight Show. The only difference is that instead of being filmed at 30 Rock with a live studio audience, this new version is filmed at the Fallon abode, starring the Fallon family. Jimmy is his usual excitable self. The writing is at the same level, the structure is the same and a casual viewing wouldn’t convert any nonbelievers.

For instance, Thursday’s Tonight Show featured a segment where Fallon interviews his dog, Gary. The voice was provided by his wife, and the low-tech bit gave shoutouts to rescue workers and doctors. It’s right in Fallon’s feel-good wheelhouse: a concoction of silliness, sincerity and relatively easy laughs into a brew that brings a smile to your face. It’s a bit that could’ve easily been featured in a conventional episode where the ever-reliable studio audience would have cracked up at every line.

But something was different this time around. Without that laugh track to back him up, Fallon’s talking dog bit felt just a little bit more subversive. Without the intense crowd energy to back up the lines that weren’t funny, it felt like a strange bit of anti-comedy to hear those jokes make such a spectacular thud when they didn’t land.

That’s the strange thing: the bad jokes ring with a dissonance that Fallon’s comedy never had before. He’s never really had an audience go against him; he’s such a likeable guy. But with no positive — or negative — reaction to cover the blindspots, the material feels far more honest than what we would get from his usual studio surroundings. It also makes the genuinely funny jokes funnier. They catch you off guard, and if you’re me, you find yourself laughing at someone who you’ve previously written off. It’s a surprisingly joyous moment, in its own small way.

He still has interviews where he laughs at everything his guests say. He still plays the same hashtag games that he’s been featuring on the program for years. He’s still the inoffensive Jimmy Fallon that slides very easily into the realm of “safe television.”

When the sanitized structure of the show is stripped away, it leaves us with a surprisingly raw product. If I’m the first person to ever describe Fallon as “raw” and “subversive,” no one would be more confounded than me.

There’s something else that’s so simple about Fallon’s resilience to put the show on (mostly) by himself: it’s comforting. Everyone has to take things one day at a time right now because life is changing so rapidly. It’s scary, and in scary times, the cynical, snarky assessments of pop culture seem relatively shallow.

Sure, it’s how people like me deal with situations that are out of their control — but in a time where everything feels out of control, why hate on a production that is genuinely trying to bring joy to viewers? It feels … wrong.

So here’s to Jimmy Fallon and the home-bound Tonight Show. His treehouse studio is a safe space that feels appropriate for the current times. It’s enough to make a detractor like me appreciate his brand of good-guy comedy, especially when the alternative is finding something new to talk to my fellow quarantined prisoners about. Speaking of, have you guys watched Tiger King …?

[Read more: We tried an assortment of hard seltzers so you don’t have to]