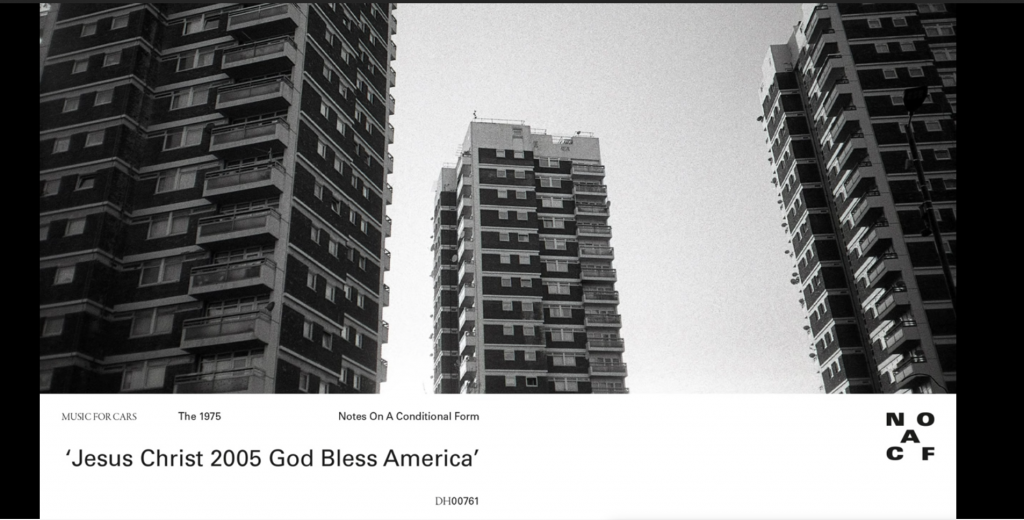 In The 1975’s new single “Jesus Christ 2005 God Bless America,” Matty Healy’s soothing voice and gentle guitar strum brings listeners quietly to their knees, as they come to an existential realization that societal desires will forever be at odds with religion.

The single — the latest released from their upcoming fourth album Notes on a Conditional Form — draws upon the iconic social criticism from “Love It If We Made It,” a song from their third album, A Brief Inquiry Into Online Relationships. Except this time, rather than being a teasing, upbeat and sardonic work, it becomes a disheartened ballad that shrugs at hypocrisy rather than scoffs at it.

Healy — who has openly identified as an atheist — proclaims his love for Jesus Christ in the first verse. Through these lyrics, religion is ultimately depicted as filler noise, mostly just hubbub and empty declarations that lead to nothing but self-loathing in the end.

The song has rather few lyrics compared to some of their other works, and already by the second verse Healy is biting the hook as he sings: “I’m in love with a boy I know, but that’s a feeling I can never show.”

The singer-songwriter begs for meaning and purpose throughout the song. By the end of it, you can’t help but feel his frustration at the way religious society handles topics such as homosexuality.

It’s a heart-wrenching production that reminds me of the yearning, yet ultimate scorn of religion heard in the song “If I believe you,” from the band’s second album I like it when you sleep, for you are so beautiful yet so unaware of it.

[Read more: This Week in Number Ones: The Weeknd ends Roddy Ricch’s reign]

That song’s lyrics take an almost trivial approach to faith, with Healy joking about seeing Jesus while high and chiding, “I mean if it was you that made my body/ You probably shouldn’t have made me atheist.” Coupling that with his earlier remarks that “religion is kind of like a disease,” the song’s overarching metaphor feels less like a literary homage and more like an edgy 13-year-old’s satire.

Pondering the irony of searching for planes in the sea and the simplicity of growing a plant in soil that seems to ask why the human condition has to be such a struggle, Healy grabs onto something deeper than we can understand. But his words also make me question whether Healy actually knows what he’s asking, or if he’s just singing to fill the void.

Healy performed this song for the first time live acoustically almost a year ago, and his performance then displayed a somber reckoning with the themes of religion and impermanence — a much more solemn and serious take than the final produced version.

The addition of American singer Phoebe Bridgers’ voice adds melancholy and dimension to the song, managing to dilute the crudeness of the lyrics. The artist was supposed to open for The 1975 on tour this summer until the dates were postponed due to the coronavirus pandemic.

This song is yet another taste of what Notes on a Conditional Form has in store for us, mashing the themes of A Brief Inquiry into Online Relationships and I like it when you sleep, for you are so beautiful yet so unaware of it into a softer sound and pace.

I’m a bigger fan of their previous single “The Birthday Party,” which sets up its exposition with fast-paced and clever musings on drugs and parties, rather than mulling on the same couple of lyrics that are supposed to be deep and yet seem to go in circles like “Jesus Christ 2005”  does. The tune is catchier and the lyrics are more casual, reminding fans of the band’s self-titled 2013 album.

“The Birthday Party” encapsulates The 1975’s brilliant way of bringing the audience into their lives with mundane detail and insurmountable depth: Healy slaps listeners across the face with one of the last lyrics sung from his angelic voice, “I depend on my friends to stay clean.”

I love where the political, social and cultural commentary of these two songs is going for their new wave of music, which they’ve titled their “Music for Cars” era. But I hope the band can return to its roots with a more jumbled, indie rock sound rather than the current sleepy nonchalance of the Jesus 2005 single. Healy again brings religious hypocrisy and institutional corruptness to the surface — at the cost of being unable to suggest a better idea himself.